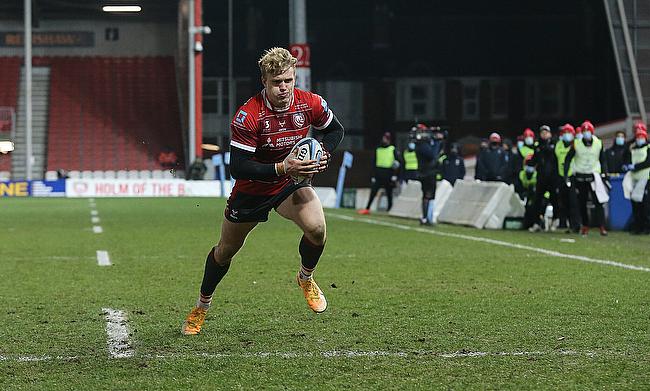 When finding out I was interviewing Ollie Thorley, I was more than aware of the rugby player who would be speaking to me from the West Country a day later.

Having made his Gloucester debut as a 17-year-old, the wing has grown and grown over these past few campaigns. The Premiership’s top try-scorer in the 2019/20 season, the Cheltenham College schoolboy has also picked up the RPA Young Player of the Year award in recent times.

But what I wasn’t entirely sure about was the person away from the pitch.

There is only so much that can be made from fleeting television appearances and written articles from years gone by. What ensued over a 20-minute chat, where the dog couldn’t help but bark as tractors finished up harvest in Staffordshire, was not only the goings on at Kingsholm, but his hobbies off the field too.

It all began with a question about how he had been passing the time during the off-season. Was he one of millions under the belief that football was coming home? A fan of The Hundred perhaps?

“To be honest, I watch Gardner’s World with Monty Don,” Thorley confessed.

Also tuning in to view his numerous friends playing on the British and Irish Lions tour of South Africa, it has been gardening that has kept him preoccupied.

“I really enjoy it,” he said. “It is something that I think is very cathartic and important as well. It is also very satisfying when you grow things. There is something about eating a tomato or a squash that you have grown that is so much better than going and buying it in a shop.

“It is definitely a passion, but just a small thing on the side at the moment. I have always had an interest in horticulture, but it was definitely something that I had a bit more time to develop over lockdown.

“I think everyone has been watching Clarkson’s Farm so I suppose it was a mini version of that for me at home. It is just fascinating to learn about plants, to learn how to improve your crop and everything like that.

“Things like how you layer borders, which plants combine well, which plants suit different types of soil and trying to create something that looks aesthetically pleasing and not at just one point of the year.

“I think it is really skilful and I am sort of in awe of garden designers and people with allotments. It is an incredibly cool thing to do as well.”

Family and friends will no doubt have their Christmas and birthday presents already picked out for the foreseeable future and Thorley is already looking ahead to the autumn where he is hoping to plant a crop of bulbs.

But where the future of Thorley's green fingers can take him might be an unknown. In recent years, we have seen former sportspeople step into the television world, and some have even moved outside of the spheres that have allowed them to gain recognition in the first place.

Former Manchester United player Dion Dublin is a presenter on Homes Under the Hammer, whilst former England and Harlequins wing Ugo Monye has joined Matt Dawson and Sir Bill Beaumont in being a presenter on A Question of Sport.

As Monty Don has been presenting Gardeners’ World for the best part of 18 years, maybe Thorley could step into the breach following the conclusion of his playing career.

“For me, it is more of a personal thing,” Thorley said, when asked about his objectives in horticulture. “I am not too worried about competing, but I do like the notion of maybe sharing a bit of what I have learnt with people.

“I don’t know in what capacity, but it is a cool idea. Rugby does give you a bit of a platform, so at some point that will be something I’ll do. I haven’t quite figured that bit out yet.

“Monty Don is a bit of an icon, but he is getting on a bit. Maybe the next iteration of him could be a rugby player, who knows?”

Buying into a city’s fabric

Last season, Gloucester finished eleventh in the Gallagher Premiership. A four place drop from the previous campaign, the 2020/21 term was certainly one of peaks and troughs for those in Cherry and White.

Whether it was fly-half drama, with the mid-season exit of Danny Cipriani, or a spate of injuries throughout the squad, there has been plenty of change off the field. Scotland international Adam Hastings has made his way to the West Country from Glasgow Warriors, Andrew Davidson from Edinburgh and former London Irish scrum-half Ben Meehan has arrived in Gloucester.

The club has also moved into the city following their departure from Hartpury University. Day-to-day training now takes place at the city centre facility adjacent to Kingsholm. This change of scenery has even added to the new culture being created by George Skivington and his staff.

“The basis of our pre-season has been built around Gloucester the club and the history of the club,” Thorley said. “We moved from our old Hartpury training facility to a new one in Gloucester and I think that has been really nice for some of the guys that maybe aren’t from the area.

“I came through the Academy, I know a lot about the club and have watched Gloucester since I was a boy, so for those guys coming in it has been nice. Our whole pre-season has been built around learning a bit about the history of the club, learning about some figures in that history as well and then playing some rugby and trying to enhance our rugby.

“A lot of it has come from Skivs. He has come as someone from outside Gloucester, and I think he has come in and thought there is an amazing heritage here. I do really think that is something we have got as a team; a responsibility to tap into the culture of Gloucester as a city and a fanbase.

“I really do think that we have got one of the most authentic and passionate fanbases in rugby. It has come from Luds (Lewis Ludlow) as well. I have played with him for quite a long time and although he is not originally from the area, he has been at Gloucester since day one in his rugby career.”

Getting the Kingsholm roar back

A full Kingsholm is perhaps one of rugby’s purest joys. As the Shed has remained empty for the past 18 months, the return of fans in these coming weeks is certainly going to be a sight for sore eyes.

Sport has hardly seemed the same since supporters were no longer allowed to grace the terraces, the efforts on the field just as empty the seats. For Thorley, a person who has grown up bleeding Gloucester Rugby, seeing and feeling Kingsholm full to the rafters again will have a special place in his heart and will emote the memories of years gone by.

“I think one of my favourite games was against Exeter,” Thorley said. “It was the first game of the season (in the 2017/18 season) and Jason Woodward scored a match-winning try in the corner.

“It was right in front of the Shed in that sort of bottom right-hand corner and you could just feel the energy in the stadium and how much it meant to everyone. I think performances like that can uplift people for weeks. It is not just that euphoria in the moment. I think for a lot of Gloucester fans, that sets their week up and they will have a good week off the back of that.

“It is a really special feeling and I have felt it from both sides. From being an eight-year-old in the Shed and being absolutely terrified because of how loud the fans are, to being on the pitch and being energised by them.

“It is an amazing experience and I think if you were to ask any rugby player that has played for or against Gloucester, they would say the same.”

With the players having a greater knowledge of the club and the area they represent, Gloucester will be hoping to embody their supporters to launch the team up the Premiership table and they start off their season with a trip to Northampton Saints.

“We are lucky to have a platform of rugby to inspire people and improve their days,” Thorley said. “To know that people are actually going to be there and feel that, it is so much more raw when you are in the stadium.

“That is not to detract from the wonderful TV packages that people provide, but it is so much more raw in the stadium and I think there is no doubt about it that it adds an extra couple of percent for everyone on the pitch, regardless of what people might say, it does.

“On a personal note, I really want to go out and play my game to the best of my ability and have some fun doing so. I think if I do that, the rest will all sort itself out.”