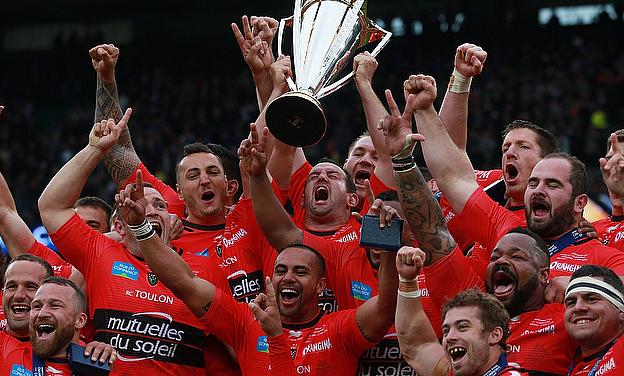 Toulon made rugby union history at Twickenham as they clinched a hat-trick of European titles by defeating fellow French heavyweights Clermont Auvergne 24-18 in the Champions Cup final.

Clermont led 11-3 midway through the first period after centre Wesley Fofana claimed an opportunist try and Camille Lopez booted two penalties in front of a 56,000 crowd.

But their woeful record in major finals ultimately continued, despite a fine 63rd-minute try by England full-back Nick Abendanon that Lopez converted.

That try, though, was eclipsed by Mitchell, who broke six tackles during a weaving run to the line which spread-eagled Clermont's defence.

Clermont have now lost 13 times on the domestic and European stages - 10 French Championship final losses, two European Cup finals and one European Challenge Cup final - as ruthless Toulon closed in on another league and cup double.

Toulon currently lead the French Top 14 by four points from Clermont, and that will now be their focus once celebrations have died down following a latest European triumph that saw their fierce rivals go the same way as they had done in 2013, while Saracens finished second best to them last season.

Clermont had no answer when Toulon upped the tempo - both in pace and terms of power - and Abendanon's score came after a woeful clearance by wing Bryan Habana that the former Bath player gathered, then finished magnificently as he chipped over Toulon's last line of defence, gathered and scored.

But Toulon, with Mitchell at the forefront during a gripping finish, had enough in the tank to secure another memorable European success.

Clermont arrived at Twickenham for the first time since last campaign's 46-6 semi-final humiliation against Saracens, although they avenged that defeat in St Etienne two weeks ago.

They suffered a late blow, though, when fly-half Brock James suffered a thigh strain during the warm-up, so Lopez started and Mike Delany was drafted on to the bench.

Clermont served immediate notice of their attacking intent when England World Cup hopeful Abendanon delivered a brilliant pass to wing Naipolioni Nalaga, but Nalaga lost his radar as the line approached and threw a wild inside pass.

Clermont continued to look the more threatening team, though, and two Lopez penalties in quick succession gave them a deserved 6-0 lead as Toulon found themselves on the back foot.

Giteau apart, Toulon were slow into the contest, but they reduced their arrears when Halfpenny slotted a 17th-minute penalty.

But Clermont continued in the ascendancy, and their territorial dominance was rewarded after 25 minutes when Parra charged down his opposite number Sebastien Tillous-Borde's attempted clearance to create an opportunity inside Toulon's half.

The ball bounced relatively kindly, yet Fofana's finish was sublime, as he outstripped Toulon's defence along a narrow channel near the touchline to give Clermont a deserved 11-6 advantage.

Toulon, though, did not require a second invitation to take their chances when they materialised, and Halfpenny completed his penalty hat-trick seven minutes before half-time.

Clermont looked to close out the half, yet Toulon were not to be denied, and they conjured an outstanding try just seconds before the break that stemmed from number eight Masoe's powerful run when he brushed off Abendanon in midfield.

The stadium clock showed that time was up, so all Abendanon had to do was kick the ball into touch, but he tried a chip and chase that resulted in Toulon gaining a half-chance that they duly accepted.

Mitchell also played his part, but it was largely a case of patient recycling before Bastareaud powered over from close range, with Halfpenny's conversion giving Toulon a 16-11 half-time lead.

Toulon took that momentum into the second period, and Armitage bumped off Abendanon through a crunching show of power, creating space out wide, but Giteau threw a wild pass when Clermont's line was at his mercy.

Another Halfpenny penalty made it 19-11, but Clermont grabbed a lifeline when Abendanon strutted his stuff, which set up a pulsating finale.

Mitchell, though, administered the final scoring act of a quality final, and Toulon once again took silverware back to the Cote d'Azur.