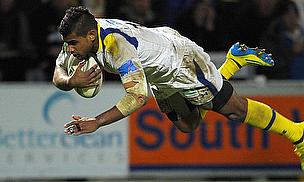 Wesley Fofana crossed for the game's only try
©Press Association 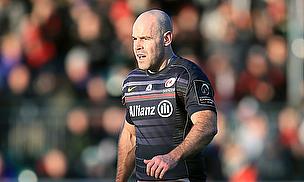 Clermont overturned a half-time deficit to beat Saracens 13-9 at the Stade Geoffrey-Guichard and reach the final of the European Champions Cup.

They will now play Leinster or Toulon in the competition's final at Twickenham on 2nd May.

A drop goal and penalty from Charlie Hodgson put Saracens into the lead at the break with Clermont mustering only a Brock James penalty in reply.

"I thought the effort and many, many aspects of the performance were phenomenal. We made Clermont play a game that they didn't really want to play.

"The game was on a knife-edge all the way through. We made maybe a few too many errors at crucial times, but in terms of the big things that we judge ourselves on, we were magnificent.

"In the starting pack, there were five players who were 24 and under, which is unbelievably young for a competition like this, but all of them are ready. They showed that today.

"They are five young English players, and hopefully they are going to be the mainstay of our club for years to come."

Wesley Fofana crossed for the home side early in the second half and James converted to put them 10-6 ahead.

Saracens got within a point when Owen Farrell landed a penalty on 65 minutes.

However, James struck his second penalty on 72 minutes to push Clermont four points clear and that was enough, despite Saracens' best efforts towards the end.

Clermont closed out the game to reach their second European Cup final in three seasons.

Saracens pushed them all the way and might well wonder what might have been as English representation in the competition this year disappeared.

Clermont started strongly looking to get full-back Nick Abendanon into the game but Saracens defended strongly and benefited from some luck when Jonathan Davies dropped the ball when well placed.

With Vunipola brothers Billy and Mako in menacing mood, Saracens took the lead on 15 minutes when Hodgson successfully landed an angled drop goal.

Clermont responded with a strong attack and after Fofana evaded tacklers, they looked to have sent Napolioni Nalagi over in the corner but he failed to ground the ball in play under pressure from Chris Ashton.

Ashton was perhaps fortunate to escape further scrutiny for what looked like an arms-free tackle and although Saracens survived that passage of play, James levelled the score soon after with a penalty that went over via the post.

10 minutes before the break, Hodgson missed a long-range shot at goal but succeeded with his next attempt to put the English team ahead.

They deserved their lead at the break having defended excellently to deny Clermont and played the game on their own terms in attack.

That changed in the second half as a clever James kick led to Fofana's try, the centre touching down with a celebratory dive for good measure.

James finished what he started by converting and with the home side ahead, they began to summon replacements from the bench including scrum-half Morgan Parra.

Farrell joined the fray with 15 minutes remaining, this his first competitive outing since January, and quickly landed a penalty to set up an intense finale.

Clermont were not to be denied, however, and James' penalty in the final 10 minutes was the last of the scoring, much to the delight of the Clermont fans.