Toulon taken all the way by Leinster 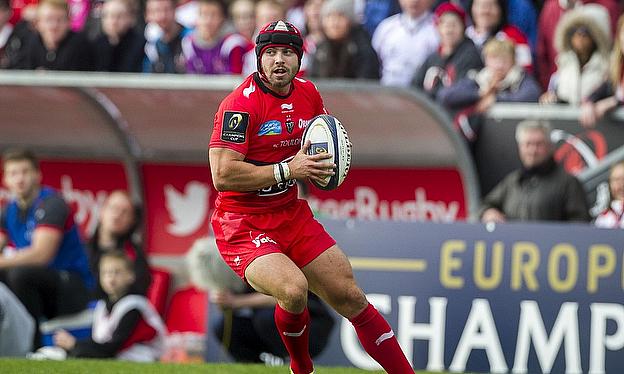 Toulon needed extra time to beat Leinster 25-20 in a compelling European Champions Cup semi-final and make it through to a third consecutive European final.

Leinster's Ian Madigan and Toulon's Leigh Halfpenny landed four penalties each to leave the scores level at 12-12 after 80 minutes.

"As a professional rugby player, something like this is what you grow up dreaming of.

"You work hard day in, day out to be involved in the big matches, and the success and ambition of Toulon, I felt that I wanted to be a part of that.

"I was fortunate to be given the opportunity and it was a challenge I felt that I needed. To be rubbing shoulders with these guys, I can only feel it is helping my game.

"The intensity and physicality today was right up there with an international match. It was touch and go throughout and games sometimes are decided by very small margins.

"You could not switch off for one second and credit to the boys. The character they showed was immense."

"I feel very relieved indeed. It was not easy, and we were a bit vulnerable.

"We made a lot of mistakes - on a better day we might have won the game by a bigger score - but we showed tremendous spirit.

"There are not many games at this level that you play during a season and it is the team that makes fewest mistakes that mostly comes out on top."

"The overwhelming emotion is one of pride.

"The effort the lads put in was fantastic and we are obviously incredibly disappointed to come second.

"Habana's intercept was the turning point - he is world-class - but the positive for us was the effort. It was second to none.

"A lot of people had written us off coming into this game but we will back ourselves to go anywhere and beat anybody."

"It felt like a boxing match out there. There was nothing between the sides.

"We probably left opportunities out there in the first 40 minutes and they had a purple patch in the first 20 minutes of the second half, but we stood our ground.

"We always have an inner belief that if each player does their job, we are a good team and we can create situations to get some points."

Halfpenny and Madigan landed a penalty apiece in extra time before Ali Williams was sinbinned but despite being down to 14 men, Toulon landed a critical blow when Bryan Habana interecepted a floated Madigan pass to score.

Halfpenny converted and at half-time in extra time it was 25-15.

Leinster struck back in the final period with Sean O'Brien crossing but Jimmy Gopperth failed to convert leaving the visitors chasing the game in the closing moments.

Toulon held on and will now play Clermont in the final at Twickenham on 2nd May.

Leinster will rue what might have been as they reflect on conceding 13 points in extra time having held the reigning champions to 12-12 in normal time.

Toulon thought they had crossed for a try early on after a steepling Frederic Michalak kick was not dealt with by Leinster and Chris Masoe touched down, only for the score to be ruled out for offside.

Halfpenny put Toulon ahead however, as they had been playing advantage for an earlier offence.

Madigan then crossed the 100-point mark in Europe this season after Bakkies Botha was penalised and he added two more penalties to put Leinster into a 9-3 lead and they went into the break 9-6 ahead after Halfpenny landed another kick.

Toulon reshuffled soon after the break with Michalak brought off, Rudi Wolf sent on and Matt Giteau moved to fly-half but they were still reliant on Halfpenny's boot in a game that saw neither side able to break free due to wet conditions.

The Welshman missed one long kick but made amends soon after to level the scores.

Madigan's next kick hit the post and after Toulon launched a counter-attack, Leinter were penalised at the breakdown to give Halfpenny the opportunity to put Toulon ahead, which he duly took.

Madigan regained his composure to level the scores once again with a fine kick from inside his own half.

Leinster retained possession in the closing moments and worked an opportunity for Gopperth to attempt a shot at goal but his kick slid wide.

From the resultant clearance Kearney attempted a long-range drop-goal of his own but it fell well short and Toulon had the opportunity to land the final blow of normal time.

Armitage's penalty landed well short, however, and the two sides regrouped for a further 20 minutes of play.

Madigan and Halfpenny traded penalties and Williams was sent to the sin-bin for taking Devin Toner out in the air.

But instead of Leinster taking advantage, Toulon regrouped and Halfpenny landed another kick.

Leinster looked to be working a try-scoring opportunity on the right wing and might have had an overlap had Madigan not opted for a floated miss pass that Habana seized upon, racing through to score unopposed.

The reliable boot of Halfpenny added the extras and although O'Brien crashed over from close range with five minutes left, Leinster had nothing more to give.