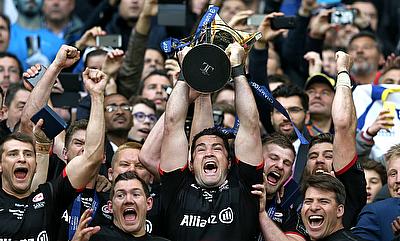 Saracens became the first English Premiership side in nine years to clinch a European Champions Cup final after they defeated Racing 92 21-9 in the final on Saturday.

Here are few of the interesting facts from the game.

Europe has been the stage for a series of agonising failures for Saracens, who have come up short in the final and semi-finals in recent seasons. But having become the first team in the competition's 20-year history to complete an unbeaten campaign, they are the undisputed rulers of the continent with an age profile that suggests this triumph is just the beginning.

2. And tactically they are the cutest

Saracens' suffocating style has its critics - Wasps and Northampton among them this season - but tactically it is hard to fault a gameplan that has swept them to the pinnacle of Europe without defeat. Playing the percentages time and again may not win over neutrals, but it is highly successful.

Nine of the starting XV were England internationals and with more on the bench, this was a victory that can only benefit the national team. Confidence levels will be soaring ahead of the summer tour to Australia where the likes of Maro Itoje, Billy Vunipola and Owen Farrell are instrumental to hopes for a series victory.

On this occasion New Zealand great Dan Carter was left in the slipstream of his opposite number as Farrell emerged as the dominant playmaker, ensuring there was no scripted first appearance in the Champions Cup final for the sport's highest-earning player. Carter will come again, but he will be the first to congratulate Farrell, who completed seven out of seven shots at goal and was composure personified.

Enabling Farrell to shine is a bruising pack and the craft of Richard Wigglesworth, the ultimate tactician at scrum-half. Wigglesworth may lack the flair, gas and creativity of a Danny Care, but he is a highly intelligent half-back with an outstanding boot and rarely makes the wrong decision.

The rise of Joe Simmonds: The Exeter fly-half hoping to lead the Chiefs to European glory