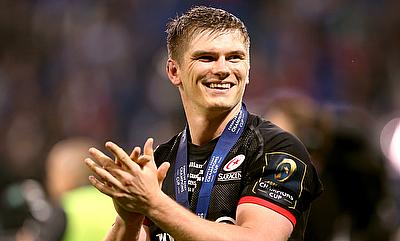 England international and Saracens back row Billy Vunipola has already set his sights on his side retaining the Aviva Premiership rugby title after being crowned as the European Champions Cup winners earlier today in Lyon.

England fly-half Owen Farrell kicked seven penalties for Saracens who ended the nine-year wait to become the first English side to win the prestigious European tournament with an unbeaten campaign.

Mark McCall's men will now move on to face Leicester in front of their home crowd in the Premiership play-offs on Saturday.Vunipola lauded his side's front five and Farrell for holding his nerves in a pressure filled final.

He also said his side will be back to business tomorrow after enjoying a deserving celebration tonight.

"It's awesome, we're in that club now. We've managed to pull it off and win this trophy. It's a massive honour.

"I'm just thankful that I did it with such good people. It's such a joy. We have awesome people and our experience pulled us through.

"The match was a real arm-wrestle. We made less mistakes. Credit to the front five, it was a massive effort from them. And credit to Owen Farrell for holding his nerve."

Farrell the man of the hour expressed his contentment in being able to score the penalties for his side. He also lamented the fact that Sarcens lost a bit of momentum in the final 20 minutes of the game, however, they buckled up in the final five minutes to seal the victory comfortably in the end.

"It's a great moment for the club. To play against a brilliant team like Racing and come out with the trophy is brilliant.

"Winning this is a brilliant achievement and is something that everyone will remember.

"I'm just happy to put the points over for the lads who win the penalties. They've worked hard all game to put us into positions to get points, so I'm just thankful.

"We lost momentum for a good while in the last 20 minutes, but we got it back with a few good turnovers and some good defensive sets. We really got stuck into them. We never panicked."