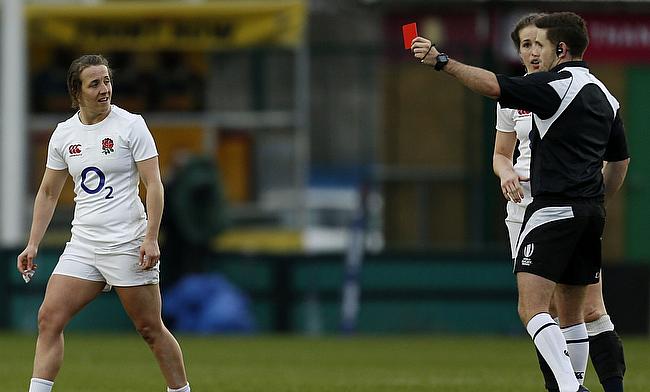 Katy McLean was sent off against Italy
©PA

The 31-year-old was handed a red card for a dangerous tackle during the recently conduced clash against Italy at Twickenham Stoop on Saturday.

Mclean appeared before a three-person disciplinary panel on Tuesday and pleaded guilty to the offence, thereby reducing the sanction from six weeks of suspension to three which will keep her out of the encounters against Scotland and Ireland.

Despite, losing Mclean, England went on to defeat Italy by 29-15 and currently top the table with three wins from as many games.

"The England player, Katy Mclean, appeared today before an independent disciplinary committee, having been red-carded by the referee for dangerously tackling an opposition player during the Women's Six Nations match between England and Italy at Twickenham Stoop on Saturday, February 25," read a Six Nations statement.

"Ms Mclean accepted that she had committed an act of foul play which was worthy of a red card.

"The disciplinary committee, chaired by Roger Morris (Wales), alongside Jennifer Donovan (Ireland) and Julien Berenger (France), having reviewed the footage of the incident and all other evidence, as well as hearing submissions from the player and her representatives, categorised the offending as mid-range, which carries a six week entry point in World Rugby's sanction table.

"The committee further determined that there were no aggravating factors and the player had met all mitigating factors permitted, and therefore decided to reduce the entry point by three weeks.

"The player is therefore suspended from playing rugby for a total of three weeks.

"Taking into consideration that the player has no scheduled matches on the weekend of March 4/5, the player is suspended until midnight on Sunday, March 26.

"The player is therefore eligible to play again on Monday, March 27 and has the right of appeal."