England will have too much for the USA - Goode 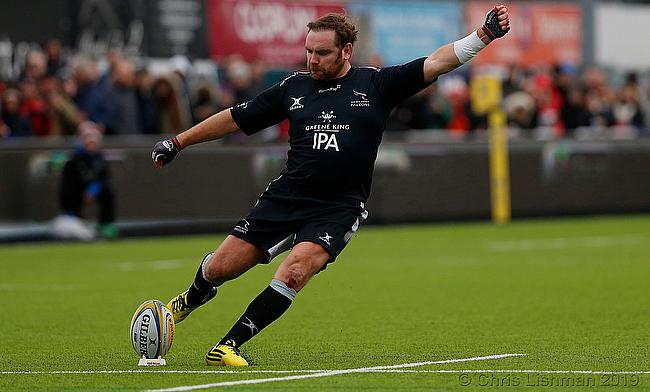 Speaking on behalf of GentingBet, Andy Goode discussed England’s clash against the USA on Thursday, as well as some of the refereeing controversy that sparked debate on social media across the opening weekend of the Rugby World Cup.

“It was a workmanlike performance,” said Andy Goode as he reflects on England's opening World Cup win over Tonga.

“We did enough to get the job done. It was Luke Cowan-Dickie that got the fourth try towards the end to give us the bonus point. It’s one of those things. First World Cup Game, Tonga were fired up for it, they had conceded 90-odd to New Zealand a few weeks before, so there was huge improvement there.

“When you see [Zane] Kapeli blitzing and absolutely smashing Billy Vunipola, your star man, your ball carrier, you know it is going to be a physical encounter. Maybe there was a bit of a weight of expectation. Everyone thought England would rock up and score a hatful of points. You’ve got to credit Tonga, their defence was brutal at times and they were organised.

“Sometimes there were unforced errors. You only have to look at Henry Slade in his two-on-one with Elliot Daly. Elliot Daly was too flat and overshot, not Henry Slade’s fault at all though. Little errors that carried on throughout the game, but the bottom line is, we won, got five points and we move onto the USA.”

Across the opening weekend of fixtures, there were several refereeing decisions that caused debate online, in the commentary box and in television studios across the world. The most noteworthy being Reece Hodge’s challenge on Fiji’s Peceli Yato. Clearly high and reckless, neither the referee or Television Match Official (TMO) looked at the challenge and Hodge has been handed a three-week ban since.

On the following day, at the same venue, Leicester’s Sione Kalamafoni made a challenge on Anthony Watson that on initial impression looked both high and reckless. After the TMO and referee Paul Williams looked at the challenge again, it was deemed to be a legal tackle.

Goode says that the call was correct and that World Rugby directives should be driven home to officials.

“Even if he had caught Watson in the head, which he hadn’t, the first point of contact was right on the chest,” Goode said. “Watson was ducking down and it was a perfectly legal tackle. The Reece Hodge one against Yato, the TMO and the ref missed that one.

“There are going to be times that this tackle law gets scrutinised post-match, just as much as it does through the game. You need referees to have a sound understanding of what World Rugby are trying to do in terms of the new directives, but I do think that was perfectly shown with how it was refereed with the Kalamafoni and Watson tackle.”

Many will remember Goode’s to and fro with well regarded English referee Wayne Barnes several years ago when Goode came out of retirement to play for Newcastle Falcons. Since starting the Rugby Pod, Goode has had Barnes feature on several occasions and believes that the Englishman was the best performer over the opening fixtures.

“You saw Barnsey referee the Scotland vs Ireland game and he had an absolute blinder,” Goode said. He’s in constant dialogue with the players. Conversely, Jerome Garces in the New Zealand/South Africa game, he doesn’t say anything at the breakdown to the players and doesn’t communicate massively at all.

Wayne Barnes and Paul Williams...restoring my faith in international refereeing.

“That’s what fans are in uproar about. They need to find a balance and people are pointing fingers at the All Blacks, saying that they got away with a hell of a lot of stuff, but that’s not their fault, it’s Jerome Garces’ fault. The man in the middle.

“Teams are there to push boundaries, trying to get away with as much as they can. If the referee lets them do it, there is only one person to look at.”

England will play the USA next in Kobe City. Vastly improved since their last outing at the Rugby World Cup, Gary Gold’s Eagles team have beaten Scotland in Texas, as well as Samoa on two occasions in the past year. Goode agreed wholeheartedly that the USA are a better side than they were in 2015, but still expects England to be victorious.

“The USA have improved hugely, especially on the sevens circuit,” Goode said. “In 15s, they’re still a little behind, but they have got some fantastic players. Titi Lamositele is a European champion with Saracens, Paul Lasike is a monster ball carrier at inside centre for Quins and AJ MacGinty at 10.

“They have got quality. AJ is an outstanding operator in the Premiership for Sale and will kick his goals, but England will have too much. Again it will be tough to start off with, having to break down a USA team in what is their cup final.

“England have to have more accuracy and more discipline in their game, by giving less penalties away and being good with the ball to have a comprehensive victory, but it will be a victory.”

Andy Goode was speaking on behalf of GentingBet. For all your Rugby World Cup odds visit here.  18+ begambleaware.org.