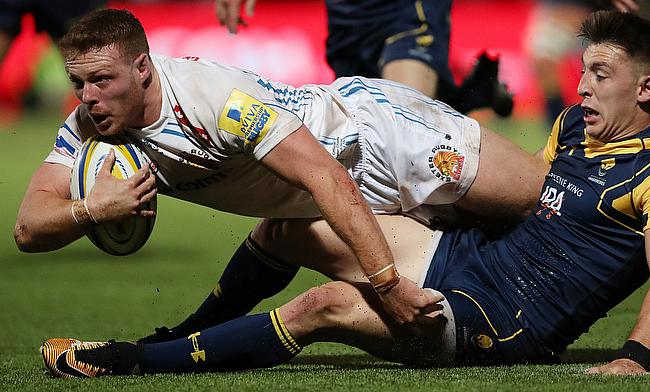 Exeter Chiefs ran an eight-try riot as they trounced Northampton Saints 57-7 in their Gallagher Premiership face-off at Sandy Park on Sunday.

This is Exeter's eighth win from 11 games as they consolidated the top position in the Gallagher Premiership table with 39 points while Northampton are at fourth place with 30 points.

Northampton Saints suffered an initial setback when Harry Mallinder was sidelined with a hamstring injury that he suffered during the warm-up. Exeter were the first to get the points on the board when Joe Simmonds kicked a penalty goal in the 11th minute.

The opening try of the game came in the 32nd minute when Nic White set up Jonny Hill over the line in the 32nd minute. Things changed from bad to worse for the Saints as Tom Collins was sin-binned for an infringement following which Simmonds and Jannes Kirsten crossed over as the first half ended with a 22-0 lead for the hosts.

Eight minutes into the second half Tom Hendrickson forced his way through following a pass from Ian Whitten. Few minutes later the home side scored two more tries with Ben Moon (54') and Hendrickson (59') dotting down to make the scoreline 43-0 by the end of the third quarter.

James Grayson with a try in the 69th minute provided some consolation for the Saints but Exeter went on to complete a massive 50-point win with Tom O'Flaherty and Sam Simmonds also scoring tries in the final 10 minutes.

"We got through to 34 minutes and it was 8-0 and the plan was to try and get through the first 40 minutes with minimal damage and see if we could bring some fresh guys on at half-time, which was a pre-planned move to see if we could attack it a different way," said Northampton director of rugby Chris Boyd.

"But between 34 minutes and 40 minutes eight became 22 and then we chased the game, so we paid the price in the end for overplaying, being ill-disciplined and trying to solve problems that guys took it upon themselves to solve."