Tom Dunn: “All you can control is what you are doing” 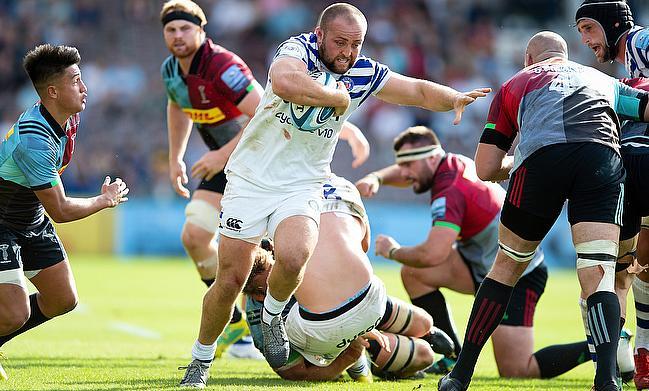 Tom Dunn must have had that sinking feeling last weekend as the clock ticked down in Rome.

Standing on the touchline back in February, Dunn watched as England beat Scotland 13-6 at Murrayfield, the clock going red and the ball going dead. Nearly nine months later, he was stood on the touchline once more at the Stadio Olimpico waiting to come on against Italy.

After several minutes of anticipation, eventually the Bath hooker was allowed onto the pitch after a stoppage in play meant that Jamie George could leave the action. He would get five minutes on the grass, managing to showcase his skillset on the international stage.

“I’d be lying if I said there wasn’t some daemons, but it is one of those moments that is not in your control,” Dunn said. “All you can control is what you are doing, so I did a few throws on the side of the pitch, bounced around a bit, warmed up my shoulders and I was ready. That was all I could do, be ready.”

At the age of 28, Dunn was the oldest of England’s three debutants in Italy, but it is deserved recognition for one of the country’s most consistent hookers. Dunn has been also been a consistent part of Eddie Jones’ squads since 2017, having been called up to the team  for that years’ Autumn internationals, keeping his place in Jones’ plans for the 2018 edition of the Six Nations and as part of the training squad prior to the 2019 Rugby World Cup.

Having made his Bath debut in 2012, much of the criticism that surrounded Dunn was around his set piece. Starting his career as a loosehead prop, it was former England forwards coach Neal Hatley that decided Dunn should try to make the two shirt his own.

Thank you for all the support and messages. Bursting with pride #1417

As time has gone on, the former England Student has not only gone on to do just that, but his week on week performances are rivalling that of England regulars Jamie George, Luke Cowan-Dickie and Jack Singleton.

After making his first England appearance, England Rugby shared a clip of Dunn on their social media channels, calling home to his partner, their children and his parents to share the occasion and emotion.

“The first conversation I had was with my other half and my kids, so just showing them my cap on the camera,” Dunn said. “My kids enjoyed it and they’d seen me on the telly. They are only four and two, they don’t really understand, they just like to see me.

“I showed my other half and sharing that with her was lovely and then the second conversation was with my parents, so it was a proud moment, a great honour to play and it was a shame that they couldn’t be there, but it was brilliant to have them on the phone in the stadium.”

The culmination of years of hard work.

All worth it for this moment.

One of six Bath players involved in the matchday 23 on Saturday, four of whom are forwards, the men from the West Country are more than deserving of their selection. Sam Underhill, Jonathan Joseph and Anthony Watson are experienced international campaigners, whilst Dunn, Charlie Ewels and Will Stuart are relatively inexperienced.

Ewels has impressed due to his very clear leadership skills, as Dunn and Stuart come from one of the most dominant forward packs in the Premiership. After the Premiership restart, the front row were scoring tries for fun and were the primary reason that Stuart Hooper’s side were able to qualify for the play-offs.

Beno Obano was in fact the only member of the Bath front-row not included in the England squad that took on Italy, with Mako Vunipola starting on the loosehead side and Ellis Genge in the 17 shirt.

After lifting the Six Nations trophy on Sunday at the team hotel in London, players were granted several days at home before heading back to the capital to prepare for the Autumn Nations Cup.

“For me, I didn’t go to any café’s, restaurants, just stayed at mine and looked after the kids,” Dunn said. “My Mrs actually works full-time, she works on the ICU at the RUH Bath hospital, so had to be careful with that sort of stuff.

“She was very strict when she got home, straight into the shower, washed her clothes, etcetera. I trained in the local park, did some running, got some dumbbells in my garage, so just kept myself to myself and enjoyed some time with my family.

“It wasn’t a written rule saying; ‘do not do this and to do this’. It is just common sense, I think. The more that you do, the higher risk you are going to be is how I look at it. I keep myself to myself, keep myself in order, keep myself safe and give myself the best opportunity and the team.”

Having won the 2020 Six Nations, England go into the Autumn Nations Cup as favourites and start their campaign in the competition against Georgia at Twickenham next Saturday.