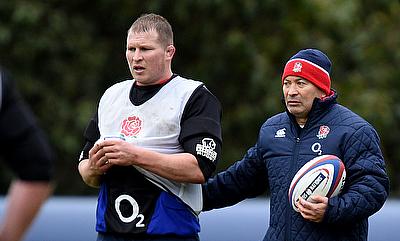 Eddie Jones has confirmed that Dylan Hartley will captain England during the Six Nations Championship and insists only ill-discipline can prevent him from resuming his leadership role.

The England head coach has handed Lions hooker Jamie George a first start for the final autumn Test against Samoa at Twickenham on Saturday as Hartley will start from the bench at half-time.

Chris Robshaw and George Ford have been named as co-captains for the Test as Hartley was demoted to the bench for the first time in 22 Tests under Jones.

“We want to test our ability, if Dylan’s not available, to put a team on the field and have leadership density,” said Jones. “So, it’s an opportunity for these guys to show it. Dylan understands it’s about developing a team for the World Cup.

“So, it’s not about making anyone uncomfortable. We know he’s a great captain and we know he can do a great job for us. But this is an opportunity for the rest of the squad to show they can step up.

“There’s no decision on the World Cup. The only decision we’ve made is that, all things being equal, and he doesn’t have one of those ‘mystical’ experiences at Franklin’s Gardens, that he’ll be captain for the Six Nations.”

Hartley said he has no problems with starting from the bench against Samoa.

"For the 20-odd games I've played under Eddie, I've sat there and said: 'boys, we've all got a role to play, whether you are a starter or a finisher'," Hartley said.

"So it would be unfair for me to say that for the last two years and then not fulfil my role this week."