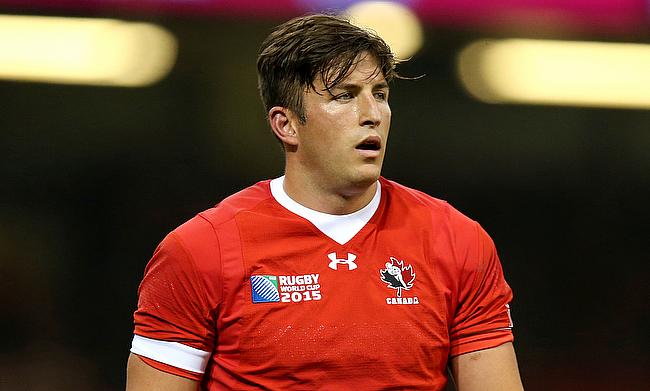 Canada international DTH van der Merwe reflected on his first experience in the Aviva Premiership with Newcastle Falcons in a thrilling 32-33 win over Bath at Recreation Ground on Saturday.

The 31-year-old, who has 25 tries from 44 Tests for Canada, opened his try scoring account in the English Premiership during the 17th minute following Craig Willis’ well-weighted kick to the right corner.

"I couldn’t have asked for a better kick from Craig because it was absolutely perfect.

"The amount of spin on the ball was incredible and I don’t think Bath knew what to make of it, but he gave me an opportunity and I’m here to take those kinds of chances."

The 6ft wing's debut for Newcastle Falcons was delayed by a knee injury that he sustained during Canada's World Cup qualification campaign and is hoping to get into the groove soon.

"It has been tough being injured but I’ve been training hard, hoping I can get in and waiting for the injury to get better.

"My family have settled in really well, it’s great living in Newcastle and I’ve loved it so far.

"I felt like it was a bit rusty on my part today because I’ve not played since June, but training has been good. There has been a lot of running, we want to play a fast-paced game with no fear and even though we fell away during the middle third we pulled through in the end."

The Falcons had a 19 point lead against Bath but Todd Blackadder's men managed to stage a comeback that saw them add 30 unanswered points before touchdowns from Chris Harris and Mark Wilson helped the Kingston Park outfit seal a thrilling one point victory.

"I think it was just confidence at the start. Once you get that first score you feel like you want to keep going, and that’s what made the difference. The middle third was one to forget but through sheer perseverance we pulled through, and it’s a great feeling.

"We’ll obviously go back and look at the video to understand what went wrong either side of half-time, and from my own viewpoint I need to find what I can do better."