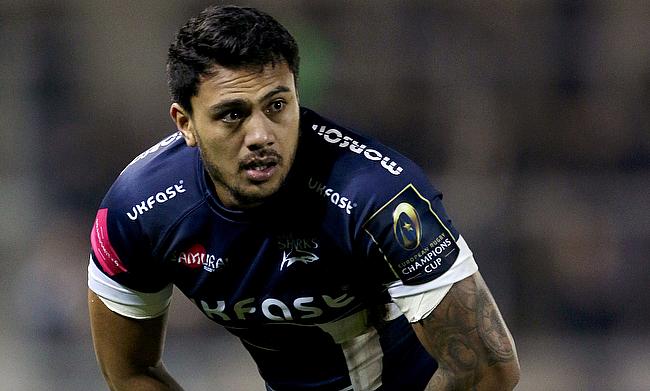 Denny Solomona scored both the tries for Sale Sharks
©PA

Exeter make it 8 in 8 after beating Gloucester Rugby 23-6
Gallagher Premiership 2018 Preview: Round 8

Denny Solomona scored a double as Sale Sharks went on to hold Northampton Saints in a 18-13 victory in their Gallagher Premiership encounter at AJ Bell Stadium on Saturday.

This is Sale Sharks' third win from eight games as they move to 10th place in the table with 14 points while Northampton Saints are ninth place with 14 points.

It looked like Sale Sharks' trouble in the ongoing season continued as Cobus Reinach crossed over in the second minute for an unconverted try that took Northampton to a five point lead.

The response from the home side came in the 8th minute when Denny Solomona went over the line with a conversion from Robert du Preez provided them a two point lead. Poor kicking from James Grayson proved costly for Saints as he missed a penalty kick that would have provided Northampton a slender one point lead heading into the break.

It was Du Preez once again with a penalty at the start of the second half stretched Sale Sharks' lead to five points before replacement Ollie Sleightholme on his debut with his 54th minute try helped the Saints level the scores.

With a gripping 35 minutes left in the game and all three results possible, Solomona with his second provided Sale a breathing space. Du Preez missed out on the conversion but kicked a penalty goal in the 75th minute as Steve Diamond's side increased their lead to eight points and managed to hold off a late penalty kick from Grayson as they seized their first Premiership win since the first week of October.

“I thought Northampton looked after us pretty well. We created a lot of chances but we just couldn’t get there in the end.

“We had five or six really good opportunities. We had some ball and we managed to eke out a win in the end.

“I thought Northampton were very good on the floor. Fair play to them – they dug in and got a bonus point.”