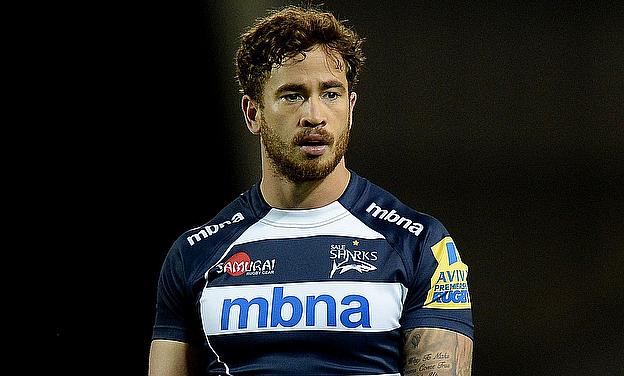 Sale director of rugby Steve Diamond is thrilled to see his players battling it out at the right end of the table for a change after they consolidated sixth place in the Aviva Premiership with victory over Wasps.

A 21-17 defeat of their seventh-placed opponents extended the gap between the two sides to eight points, with tries from Dan Braid and Jonny Leota and three penalties and a conversion from Danny Cipriani giving Sale a deserved win.

"We had a good start before we had a rocky patch, conceding 17 points, but we then became dominant in the scrums to win the match."

With half an hour to go, Diamond changed his entire front row - a decision which turned the game in Sale's favour.

"It was always our intention from the start to do this, as I believed our forward bench was stronger than theirs," Diamond said of the decision.

Wasps conceded an early 10 points after Joe Simpson was yellow carded for a high tackle on Nick Macleod, who left the field with concussion.

A red card could have been a possibility but Diamond was content with the referee's assessment.

He said: "It was innocent more than anything and I think the officials got it about right."

Wasps rallied to take a 17-10 lead at one point with a try from Simpson and four penalties from Joe Carlisle before falling away badly.

Director of rugby David Young had few complaints, and said: "Sale deserved to win; they were a lot smarter than us.

"We gave away an easy 10 points at the start, which seems to be our Achilles heel.

"We then had a lot of pressure and came away with only four penalties, but we need to be coming away with seven points not three from those situations. We are missing our X-factor players in Christian Wade, Tom Varndell and Elliot Daly.

"Sale changed their entire front row and it made a huge difference. We struggled to cope and gave away three silly penalties. They were far superior at the kicking game."

The Sharks remain in the sixth position in the Aviva Premiership table, but crucially they have extended their lead over Wasps - in seventh - by a further three points, which leaves them with a handy eight-point advantage over their nearest rivals.

The controversial moment of the game came in the 10th minute with the sin-binning of Joe Simpson. The Wasps scrum-half high tackled Nick Macleod who took no further part in the game.

The incident was reviewed and a yellow card was awarded but Simpson may have been fortunate not to pick up a red one.

Sale scored a decisive 10 points in Simpson's absence. Danny Cipriani kicking a penalty and a conversion to add to Dan Braid's try before Wasps rallied to score 17 unanswered points. Joe Carlisle kicked four penalties before Simpson raced away for his side's only try.

The final quarter saw the Sale pack dominate and they recovered from 17-10 down with an unconverted Jonny Leota try before Cipriani kicked over two penalties in the final 20 minutes.

Sale included Henry Thomas at prop following his return from England squad duties. Macleod and Will Cliff were selected at half-back to replace Cipriani and Dwayne Peel.

Wasps made four changes from last week's defeat at Bath with Simpson and Sam Jones back in the starting line-up. Tom Palmer and Andy Goode returned from injury to take up positions on the bench.

Wasps suffered an early blow when Simpson was yellow carded for a dangerously high challenge on Macleod. After lengthy treatment, Macleod was led off to be replaced by Cipriani, whose first action was to kick the resulting penalty from the half-way line.

Simpson was still absent when Sale scored the first try of the game after 15 minutes. Mark Cueto chipped ahead on the half-way line; the ball ran loose and Braid was on hand to race 20 metres for the try which Cipriani converted.

Simpson returned, just in time to see Carlisle put Wasps on the scoreboard with a penalty. The outside half then added two penalties in quick succession to reduce the arrears to only one point.

Two errors from Wasps gave Sale the chance to exert pressure. Simpson's kick was charged down before James Gaskell knocked on but Sale could not capitalise as Dave Seymour was forced into touch inches short of the try line.

Wasps trailed 10-9 at the interval but dominated the opening period of the second half and were rewarded with a fourth penalty from Carlisle.

After 49 minutes, Wasps scored their first try. An aimless kick from Cipriani was neatly collected by Ashley Johnson. The flanker fed Will Helu whose quick pass sent Simpson on a 40-metre run to the line.

Sale soon responded when Wasps carelessly lost a line-out in their own 22 to enable replacement, Mark Jones, to drive forward and put the home defence on the back foot. Cipriani took full advantage by selling a neat dummy to send Leota over in the corner.

After 58 minutes, Goode was introduced in place of Carlisle, just before Cipriani put his side back in front with a penalty.

Goode had a chance with a long-range penalty but his attempt drifted wide as Sale kept their one-point advantage going into the final 10 minutes.

Wasps never looked like clawing it back and it was a third penalty from Cipriani, four minutes from the end, which ensured a vital victory for Sale.