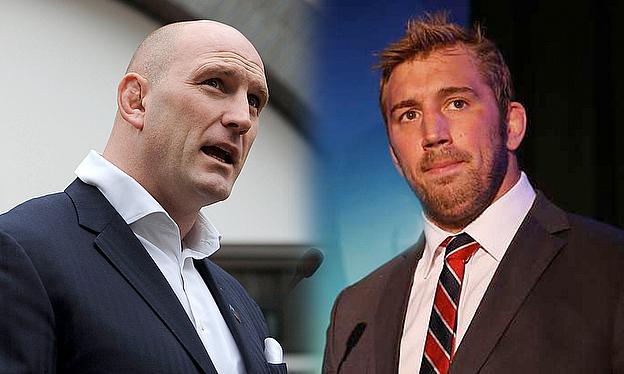 LD - I’m going to ask you about the captaincy because I’m quite well placed to ask this, you’re England captain but not Harlequins captain, how does that feel for you this season?

CR – it’s been a little bit strange, of course initially. But you soon get back into the swing of things, you know if Joe needs a bit of a hand, similarly to how I was before, it wasn’t just me out there by myself leading everything; I had the leadership group around me

LD - Was the area of the captaincy something you approached Conor with or was it a bit of both, he came to you and said you’ve got a big year coming up let’s take a bit of pressure off you?

CR – a little bit of both really; it was one of those things where we’ve actually been speaking for some time and as you’ve seen with various sports in the last year or so, the media pressure does tend to pump up a little bit and especially with the year ahead there’s going to be a lot of things and you (LD) probably know from your own experience being with Phil Vickery, when he was captaining England and you were Wasps captain, did it make a big difference to Phil?

LD - yeah I suppose it means you don’t have to do every team talk, every warm-up, every media session…

CR – Yeah exactly, it’s just little things like that which probably do add up in the long term when you look over big years and big series and tournaments and bits which you think ‘oh that shouldn’t make a difference’ but you do that on the back of potentially a big loss or a big win and the emotions and everything mentally… it’s a big side of the game now that mental side and it’s about making sure you are fresh. Last season I think we played for over a calendar year when you include tours and pre-season so it is important that guys do look after themselves and that’s what Conor’s done.

LD – Let’s talk Europe, new competition, massively exciting, how are the guys in the dressing room feeling about it?

CR - Yeah, excited; of course it’s always a bit tougher to train when conditions are like this out there, but the guys love Europe, they love a trip in Europe as well and it is always exciting. I think the great thing about Europe is you’re not always playing against players you normally play against. I can’t remember if Quins have actually played Castres in their previous history, so you are playing a bit of the unknown which is always quite exciting and you’re playing against some incredible players as well. It is a fantastic tournament and it’s great it did stick around and allows players to compete against each other.

LD– if we look specifically on Friday night, playing Castres, a team you don’t know so well, are studying the tapes?

CR – yeah, of course every team around has a big analysis team and knows what’s going on and what moves, and the way they like to play and stuff. A typical French pack, really big, heavy pack who are very set-piece orientated but also with some dangerous backs as well and guys who can kick the ball a long way so again coming back to our discipline. If we are ill-disciplined, a team like this has a strong maul, strong kicker and will be hard to play against.

CR - very excited, looking at the way teams are playing, players are playing, guys are putting their hands up and it’s fantastic for English rugby. I think also the way England finished in the summer we feel we’ve got a little bit of unfinished business, that we didn’t quite put ourselves out there and, the first two games were absolutely fantastic down there in the summer but unfortunately we feel that as a team we let ourselves down in that last game just being slightly off the pace.  And of course New Zealand are up first aren’t they, so we are so excited

LD - looking at the back-row that is extremely competitive area, do you feel the competition, the noise around you? Or do you just focus on yourself and thrive on the fact that the likes of Haskell is playing well and others at different clubs?

CR – you’d probably be lying if you said you didn’t feel it or notice what’s been written or said out there. As an individual there is always competition and you want to make sure that you are playing as well as possible and how do you go about that? Do you go about that by being drawn into what’s being said or do you speak to the coaches and the guys that matter and can help you and try to improve your game to get better? And that’s the way it’s got to be, you can’t be drawn into all that stuff.

LD – With the World Cup at the end of the year, it’s obviously an extremely big year for rugby, do you dare to dream about the end of next year and the World cup or do you just take it in each individual block? It must be at the back of your mind?

CR – it is, it is… you try not to, is probably the best way of putting it. I think everyone knows what’s happening and when it’s happening because every time we’re interviewed we are reminded. It is extremely exciting, don’t get me wrong and England are proving themselves and improving regularly I think and that it is the main thing. But we still have a little bit of a way to go with this Autumn Series coming, the Six Nations, which we’ve finished 2nd the last three years, we still feel there is something out there we want to grab, we want to claim…

… LD –actually I was going to ask you about that because under your captaincy England have been improving all the time, winning big games but you’ve yet to win the tournament you really want to. Is that something - your clearly going to target - but that you’ve almost have to do before you take on the World Cup?

CR - yeah I think so. It just gives you that backing doesn’t it. In the back of your mind you know what you’ve done and as international players and as a team we are judged truly on results, you can say you’ve played the prettiest rugby or whatever but at the end of the day if you’re not winning it doesn’t really matter.