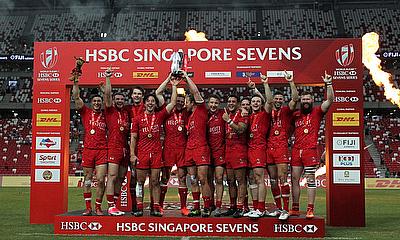 Canada managed to overcome a late resistance from USA as they clinched their maiden World Rugby Sevens series in Singapore with a 26-19 triumph on Sunday.

Canada and USA finished second in their respective Groups of Pool A and Pool D. Canada stormed into semi-final with a 14-26 win over New Zealand and followed it with a 17-5 victory over England to reach the finals.

On the other hand, USA enjoyed a 19-24 and a 40-7 wins over Rio Champions Fiji and Australia to lock horns with Canada in the final.

Matt Mullins gave a perfect start for Canada with an early try and soon Harry Jones and Mike Fuailefau also crossed over to make stretch the lead to 19-0.

However, USA made a strong comeback through a double try from Perry Baker and Stephen Tomasin to level the scores 19-19. But, Lucas Hammond scored the decisive try for Canada to win the encounter 26-19.

“It’s hard to put that into words. We took a licking against Fiji yesterday, and from our coach. But we showed up today, we showed the world we can beat anyone. We beat three of the best teams today. We are flying. An unbelievable feeling.”

England and Wales won the Bronze medal game and Challenge Trophy respectively following their wins over Australia and Scotland.

South Africa continue to top the World Rugby Sevens series with 157 points and are followed by Fiji and England with 132 and 130 points respectively.