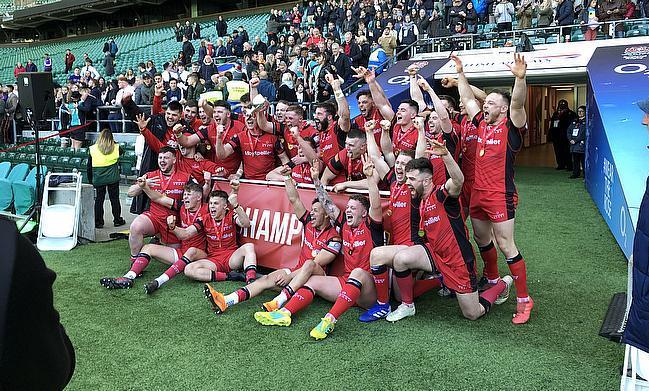 The new university rugby campaign is almost here and as ever, there is plenty to get excited about this year.

As BUCS Super Rugby enters its fourth season, can anybody stop Hartpury’s dominance or will the Gloucestershire outfit add to their hat-trick of titles? We’re about to find out.

Also this term, BUCS have introduced a Women’s National League where the top six universities in the UK have been grouped into one division. With a more competitive edge to this season, who will secure a place at Twickenham Finals day in 2020?

A new season, but the same ending?

BUCS Super Rugby’s slogan for the new season is #ExpectTheUnexpected and it is easy to see why. Last year, the competition was incredibly unpredictable with each university more than capable of beating one another throughout the course of an enthralling campaign.

However, the overall outcome was all too familiar. Sean Lynn’s excellent Hartpury side tasted Twickenham success for the third term in a row as they defeated Leeds Beckett back in April to add another title to the university’s trophy cabinet.

The challenge is there for a new group of Hartpury players to reach England HQ for a fourth successive campaign, but 2018/19 domestic champions the University of Exeter will be itching to win the big prize this time around.

Keith Fleming’s men have been consistently strong since the introduction of BUCS Super Rugby - reaching the final in 2017 - but despite finishing as league winners last term, the Green and Whites fell at the semi-final stage as they lost out to Leeds Beckett at Topsham.

The quality which Exeter possess going into this season was on show in the recent Premiership 7s at Franklin’s Gardens. Arthur Realton was one of the standout performers for Exeter Chiefs in Northampton whilst the likes of England U20s’ Sam Maunder was also involved. The talent is there so are Exeter the best placed to knock Hartpury off their perch?

Leeds Beckett University will have something to say about that after they racked up an astonishing 11-match unbeaten run to conclude their season at Twickenham last year. Kerry Wood’s side have been rebuilding over the summer with the likes of flying winger Chester Duff moving on, but Beckett do have the tools at their disposal to challenge for silverware this term.

Hear what @kizzadavies15 has to say regarding pre-season, Wales’ chances @rugbyworldcup and varsity. ?? pic.twitter.com/FA7vbRYujf

In the words of Head of Rugby Aaron James, the University of Bath were once again the bridesmaids rather than the brides in BUCS Super Rugby last season. After another strong campaign, in which Bath did the double over Hartpury, the Blue and Golds were unable to get past the semi-final stage of the competition.

A place a Twickenham continues to elude the Blue and Golds, but Bath look to have had a positive pre-season and they begin the new campaign with a mouth-watering South West derby against Exeter.

There will be a new team heading up Northumbria University this season after former coach Darren Fearn departed the club in the summer. Fearn is now in charge of the programme at Newcastle University so Joel Brannigan and his coaching staff have taken over the ropes at Northumbria this term.

After securing a top two place in 2018, the North-East side finished seventh last season and they will also be without talismanic captain Oli Robinson for this term following his move to Championship side Ealing Trailfinders.

However, their strong links with Newcastle Falcons gives Northumbria access to some of the brightest talent in the region and the same applies to Durham University.

Alex Keay’s side have had the likes of Ben Stevenson and Charlie Wilson at their disposal over the last couple of years and when you add England U20s’ Josh Basham into the mix, the Palatinate do have the attributes to challenge for honours this term. With a strong representation in the England Students set-up as well, Durham will be aiming to break into the top four after finishing in sixth place last year.

Loughborough University may also harbour similar ambitions. The Midlands club had a very disappointing campaign in 2018/19 and finished just six points above the relegation spot in BUCS Super Rugby. However, in their centenary year, Rhys Edwards has now taken over the reins at Loughborough and he will be determined to rejuvenate the 2016 BUCS Championship finalists.

BUCS Super Rugby will contain three teams from Wales this term following Swansea University’s play-off victory over Nottingham Trent University. The Swans do begin their maiden campaign at this level in front of the BUCS cameras when they travel to Loughborough on Wednesday and they will be determined to show their strengths across the field.

Swansea could also learn a lot from their fierce rivals Cardiff University who had a superb debut season at the top table of university rugby last year.

Under the guidance of Alun Wyn Davies, the Red and Blacks finished in eighth place to secure a spot in the play-offs, but with a few changes to the squad this year, can Cardiff repeat their achievements of 2018/19?

Near neighbours Cardiff Met University will be keen for a slightly more consistent term this year. Danny Milton and Ian Gardner’s side did finish in fifth place last season before losing to Leeds Beckett in the quarter-finals, but the Archers’ squad continues to be full of quality and they will have their sights set on a top four finish this time around.

Women’s Rugby on the rise

The 2019 Women’s BUCS Championship final was arguably the most compelling in recent times. The University of Exeter and Durham University played out a superb contest at Twickenham, but it was Jo Yapp’s side who prevailed as the Green and Whites secured their second successive title.

The fact that players such as Clara Nielson (Exeter) and Heather Kerr (Durham) went on to represent England during their Summer Series in the USA shows the talent within the women’s university game and this year, BUCS have introduced the National League.

The aforementioned Exeter and Durham will compete alongside Hartpury, Cardiff Met, Northumbria and Edinburgh between October and February before battling it out for a place at Twickenham.

"Girls can focus on being at university & being a professional rugby player at the same time."

As mentioned, Exeter are the current championship holders following a purple patch of success under Jo Yapp, but she has now moved on to be part of the set-up at Worcester Women as a skills coach.

There is also change at Hartpury. They reached the semi-finals last term, but Susie Appleby’s great work with Gloucester-Hartpury women was recognised by Exeter Chiefs, who announced the formation of their women’s team at the start of the month.

Durham were the surprise package in 2018/19 as they reached their maiden Twickenham final under the guidance of Cameron Henderson so it will be interesting to see whether the North-East institution can build on a very positive campaign.

The likes of 10-times champions Cardiff Met will also be strong this year while 2017 finalists Northumbria and Edinburgh have the talent to really mount a challenge for the championship title in 2019/20.