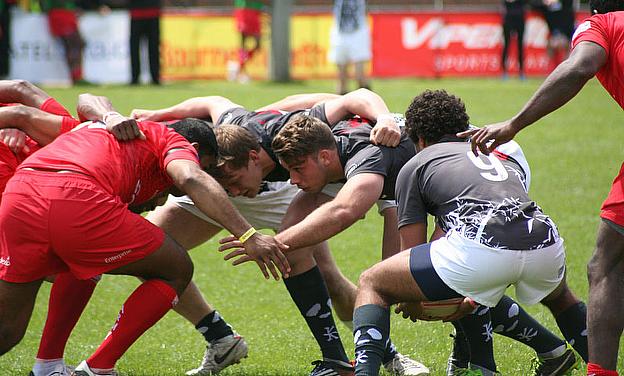 RedPanda facing off against the Army
©TRU

Rio beckons for England
North Dorset Sevens 25/7/2015
Which stars of fifteens would you like to see playing Rugby Sevens in Rio?
South Africa Sevens: Seven of the Best

It is arguably the best sports festival in the world and once again it is upon us. For the eighth straight year, Bournemouth 7s takes center stage this Bank Holiday weekend.

Bournemouth 7s combines music and sport and has been entertaining thousands of festival goers since 2008.

Known as the Sporting Glastonbury, last year was bigger and better than ever as 30,000 people flocked to Bournemouth Sports Club and this time around, the festival is set to be another massive hit.

It is the World’s Largest Sport and Music Festival, but also this tournament showcases high quality Rugby 7s along with Social Rugby 7s, Netball, Hockey and Dodgeball tournaments.

The National Cup for Rugby 7s is the showpiece event of the weekend where many of the country’s best 7s teams on the amateur circuit are involved.

Last year, debutants The Black Sheep were crowned champions after some superb performances throughout the competition and they beat The Army in the final, which was viewed by thousands of spectators.

One of the sides competing this year is the RedPanda 7s run by Talking Rugby Union’s Max Ashcroft and Max Skofic.

A few weeks ago they took their side to the Kinsale 7s and reached the semi-finals, but lost to the eventual winners the North Wales Exiles. They will certainly want to bounce back from that and make their mark this year in Bournemouth.

Away from the National Cup, the elite Ladies Cup was won by Wales Women in 2014 whilst the other sports on show were a huge success.

Dodgeball broke all records in 2014 as the competition saw 64 teams involved which is the most Bournemouth 7s has ever had.

Hockey 7s was also introduced to the festival 12 months ago and it earned some excellent reviews for its fast, quick paced version of the game and it is sure to be a success once again this weekend.

Away from the sport itself, Bournemouth 7s had so much to offer last year and for 2015, the entertainment available is second to none.

Bournemouth 7s will have 10 arenas across the weekend from a V.VIP Lounge to the Karaoke 80s tent and also they have the ever present Turborg tent which includes Europe’s Longest Bar.

There is a range of entertainment for festival lovers to enjoy including a pitch side Jacuzzi and the Red Bull Player’s Lounge where players can refuel on Red Bull to revitalise between games.

With all this entertainment, it may have slipped the mind that it is also the Aviva Premiership Semi-Finals this weekend which will be shown on the big screen on Saturday afternoon.

Also, there are a whole host of bands and DJ’s performing across the three days in the Turborg tent and in the Big Top Dance Tent sponsored by Kopparberg.

In honesty, that is just a brief insight to all the great entertainment that will be taking place on the South Coast this Bank Holiday weekend and yet again the Diamond Sporting Group and the incredible sponsors look set to have put on another outstanding festival of sport and music.

If you’re interested in attending, there are still tickets available, but I’m sure they won’t be around for much longer.

Click on the link for all the available tickets and their prices: http://bournemouth7s.com/tickets/

Keep up to date will all that goes on at the Bournemouth 7s this weekend via Talking Rugby Union’s Twitter Account @TalkRugbyUnion as well as Red Panda 7s’ account: @redpandasevens.