Bournemouth 7s Delivers On All Fronts 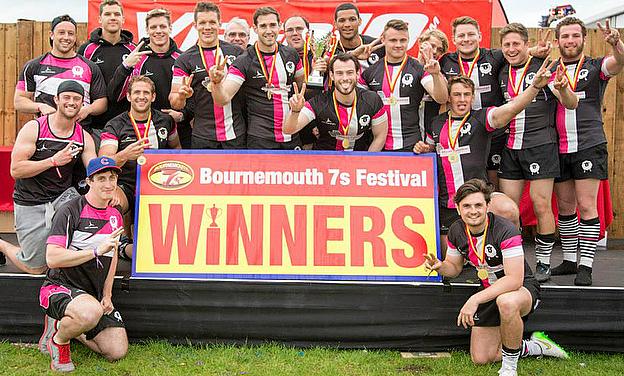 Once again the mix of sport, live music and wall to wall entertainment produced an excellent weekend at the Bournemouth 7s competition this May Bank Holiday.

This event is without doubt an all-round, well organised festival experience, but on the other hand – the sport is always at its heart.

The usual late May sunshine set the seen over Bournemouth Sports Club and in terms of the Rugby 7s competition, it was the perfect backdrop for the Black Sheep to clinch the centrepiece event – the Men’s National Cup.

The second tier of men’s rugby 7s were involved in The Guinness Cup which included the Smashy Bears and Dorset Dockers who would go on to produce an enthralling final with the Bears clinching the title.

In the other men’s competitions teams included the Overdressed Pandas, Silverback Barbars, Pint not Protein and Prison Pirates.

Day One on the South Coast produced a superb crowd which wasn’t surprising, but to see 37,000 tickets sold was extremely impressive.

The National Cup was held on the main pitch at the event with 4 groups of 4. The draw was not made till Friday night which did cause a lot of disruption for the elite teams.

Our friends, Red Panda, only found out on the weekend that you needed a top three finish on day one in the group stages, to go through to the Sunday.

Team principal Max Ashcroft told us:  “We were unaware that we might make travel commitments, hotel reservations and only end up with one days rugby.”

Despite this, the games proceeded in a very organised manner with all the matches starting at their correct times.

With that in mind, it went down to the wire for Red Panda as they faced Carmarthen Warriors, with both teams now competing for a place in the National Plate. As you would expect, the game was tight throughout, but it was the Warriors who stole the victory by two points.

The stand out games in the quarter-finals of the National Cup were Bryanston against the Army with Bryanston coming through 12-7 and Black Sheep beating the Godfathers 19-17. The semi-finals saw some excellent rugby played, but Bryanston’s journey ended with a 26-21 defeat to the All Stars, whilst Black Sheep saw off a strong Apache side.

With the National Plate going straight into the semi-final stage both Cam Warriors and RAF Spitfires booked their places in the final. The Warriors swept Esher aside whilst the Spitfires did it the hard way as they came back from 14-0 down against Ponty Butchers to win 19-14.

So on to the finals. The National Cup once again saw Black Sheep in the final and the 2014 winners made it two in a row with victory over the All Stars in the last 15 seconds of the game. Unfortunately, a bit of the shine was taken off the victory as the All Star’s Nick Foster was taken off injured during the game and he was, one of the undoubted players of the Tournament.

The Plate also delivered on the excitement front as 71 points were scored in total. After taking an early lead, the RAF Spitfires didn’t look back and won the game 46-25 against the Cam Warriors.

Like we mentioned at the beginning of the article, the sport was at the heart of the event with the Hockey, Netball and Dodgeball competitions producing some excellent action and once again proving a success over the weekend.

The entertainment on show was big and better than ever and I am sure the weather played its part in making it another superb Bournemouth 7s festival.

So roll up, sport, music and entertainment lovers!  Pencil Bournemouth 7s into your diaries for next year and get ready for the Glastonbury of Sport.

Talking Rugby Union’s next port of call on the 7s circuit is the Skofic 7s next weekend. Get checking the website and our twitter account @TalkingRugbyUnion for updates.