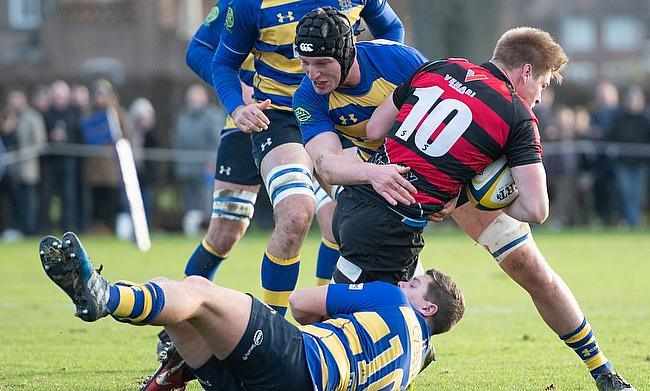 Blackheath are one point behind league leaders Old Elthamians as ‘Club’ claimed a narrow win over their local rivals at College Meadow.

James Shanahan’s side recovered from their defeat against Rotherham Titans to spark their title ambitions back into life heading into 2019.

Third-placed Rosslyn Park continue to be in the promotion mix after a stunning fightback against Bishop’s Stortford while victories for Ampthill & District and Rotherham Titans ensured the race for top spot remains wide open.

Down at the bottom, Birmingham Moseley are back in the drop zone after a defeat against Cinderford, but rivals Esher and Loughborough Students both lost against Plymouth Albion and Cambridge, respectively.

Elsewhere, Sale FC claimed a late win over Caldy to round off 2018 with a positive result.

Blackheath hung on as they defeated the 14-men of Old Elthamains to move to within a single point of their local rivals at the summit of National One.

OEs led 3-0 following a penalty from Tom White, but the hosts then had Cameron Holenstein sent off for a dangerous tackle on 33 minutes.

The visitors took full advantage after the restart as Henry Staff and Markus Burcham both crossed before the hour.

White kept OEs’ hopes alive with his second penalty of the afternoon and the home side set up a nervy finale when George Perkins dotted down in the corner.

However, ‘Club’ were able to hold on as the title race took another twist in National One.

Benji Marfo’s late try gave Rosslyn Park a comeback win over Bishop’s Stortford at Silver Leys to keep them firmly in the battle for promotion.

Stortford had gone into the break 20-3 ahead after tries from Declan Caulfield and Joss Linney, as well as 10 points from the boot of Tom Banks.

The fightback gathered momentum when Harry Leonard landed a penalty and Greg Gillanders dotted down shortly after to bring the score to 25-20.

And the turnaround was complete when Marfo scooted over for a converted try as Park snatched the win to leave them just one point off the top.

An improved second-half performance by Ampthill and District secured an excellent victory against Chinnor.

Chinnor doubled their advantage when Alex Dancer crossed on five minutes, but Ampthill then woke up and led at the interval thanks to tries from Aleki Lutui and Sam Baker.

The hosts took control after the break as Baker grabbed his second before Will Foster finished superbly to make it 28-13.

The away side did respond through Goss, but another score from Lutui meant Ampthill still had daylight between themselves and their visitors.

Chinnor’s Josh Hudson secured a bonus-point on 75 minutes as he rounded off a superb team move, but Ampthill made sure of the victory when the impressive Alex Pritchard landed a penalty.

Rotherham Titians scored three tries to earn their fifth win on the trot as they beat Darlington Mowden Park at Clifton Lane.

Winger Daniel Leake went over on two occasions and Seb Nagle-Taylor grabbed another as the hosts led by 12 points at the beginning of the second-half.

Gary Law landed two penalties for Darlington Mowden Park and Martin Lithgo’s converted try made the score 25-13, but the away side could not add to their tally, despite large periods of pressure.

The Titans’ victory leaves them just four points behind Old Elthamians heading into 2019.

Sale FC get into the festive spirit at Caldy RUFC with a vital away win. Full match report, video highlights and interview now on the website. #onesalefc #rugby #saletown https://t.co/9XDOdItfYC pic.twitter.com/4xKhR4n37c

Another Wilkinson kick and a try from David Seymour gave Sale a 16-10 lead at the break, but Dickinson’s second score on 50 minutes put Caldy in front.

Jones landed another penalty to keep Caldy ahead, but Sale had other ideas and five minutes from time, Hughes crossed for the visitors to clinch the win at Paton Field.

Birmingham Moseley slipped back into the bottom three as Cinderford secured a six-try victory over the Midlands club at Dockham Road.

Prior to this Round 16 clash, Cinderford hadn’t picked up a win since the beginning of November, but scores from Nathan Taylor, Jack Hayes, James Elliot and Harry Hone (2) sealed the bonus-point triumph.

Moseley’s points came via two penalty tries in the second-half and this defeat in the West Country means they are back in the relegation places heading into 2019.

Plymouth Albion recorded their third straight victory in December after beating Esher in a tight affair at Brickfields.

The hosts were 10 points ahead during the second half thanks to tries from Jamie Salter, James Tait and Frank Kelly, while Esher responded via the boot of Paul Roberts.

However, a Cameron Gentles try for Esher set up a tense finish, but Kieran Hallett’s side hung on to complete an excellent month.

Cambridge held on for a narrow National One victory over a resilient Loughborough Students side at Volac Park.

Richie Williams’ men, who have secured more wins on the road this season than they have at home, led 13-5 at the interval thanks to Ean Griffiths’ score and eight points from the boot of Ben Penfold.

Alex Glashan had crossed for Loughborough before the break and his side cut the deficit immediately after half-time as Charlie Reed kicked a penalty, but Oli Petrides’ effort kept Cambridge in control.

Loughborough’s Will Brown and Petrides exchanged tries to make the score 25-15, but Harry Priestner’s effort on 75 minutes gave the visitors a fighting chance of snatching a victory.

However, Cambridge stayed cool to secure their third home win of the campaign while Loughborough now sit seven points from safety.