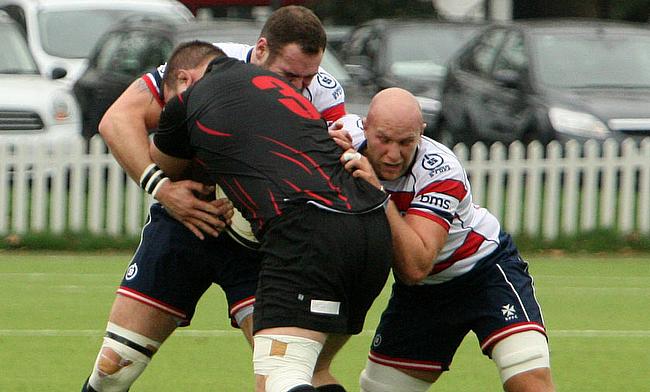 Old Elthamians trade places with Blackheath at the summit
Esher host Loughborough in vital clash towards the bottom
Esher, Moseley and Loughborough begin December on a high
Rosslyn Park and Ampthill aiming for win to stay in thrilling title race

As we reach the halfway point in the National One campaign, the title race is heating up nicely and for an impressive Blackheath side, they can strengthen their promotion bid this weekend.

James Shanahan’s men sit one point behind league leaders Old Elthamians and before the top two collide next Saturday, ‘Club’ have to overcome the challenge of Rotherham Titans in Round 15.

The Titans are also in the promotion hunt as they currently sit in fourth place while Rosslyn Park, who occupy third spot, host Caldy and the aforementioned table toppers OEs entertain Bishop’s Stortford on Saturday.

At the wrong end of the division, there is another crucial game for Loughborough Students as the league’s bottom club take on Plymouth Albion while rivals Birmingham Moseley face Cambridge and Esher go to Chinnor.

Elsewhere in National One, Ampthill and District visit Sale FC and Darlington Mowden Park come up against Cinderford.

Well, they are still there. Old Elthamians remain in the thick of the National One promotion race after they moved to the summit of the division last week. Gavin Lach’s side produced a brilliant display to see off Cinderford as they extended their unbeaten run to nine games. The men from College Meadow are now one point clear of local rivals Blackheath and they will want to stay in top spot when they entertain Bishop’s Stortford on Saturday.

As things stand, Andy Long’s side are four points from safety after narrowly losing to Rotherham Titans last week and they have now won just one of their last eight matches. However, they will take a lot of positives in defeat against Rotherham - and from their recent loss against promotion candidates Blackheath - so Stortford will be hoping to produce a similar display as they aim to dig themselves out of trouble.

We are now halfway through the National One season and the title race is still alive and kicking. In the past couple of years, that has not always been the case with Hartpury and Coventry romping to promotion, but this term is a refreshing change. As things stand, Blackheath are just one point behind leaders Old Elthamians and like their near neighbours, they head into Round 15 on a nine-match unbeaten run after some excellent performances.

James Shanahan has really taken ‘Club’ to the next level this year, but his side will be tested when they visit Rotherham Titans this weekend. The Yorkshire outfit will also feel they are in this battle for promotion as the Titans currently sit fourth in the table and seven points off OEs. Joe Barker’s men enter their penultimate game of 2018 on the back off three consecutive victories and if they were to extend that run on Saturday, then Rotherham would certainly add some spice to this already intriguing fight for top spot.

A gritty display from Rosslyn Park in Round 14 allowed Kieran Power’s side to stretch their winning run to three matches as they edged their way past Cambridge. It is now just one defeat from their last eight matches for Park and they are still very much in the promotion picture as they sit just five points behind league leaders Old Elthamians.

The men from the Rock will be keen to continue their momentum when they welcome seventh placed Caldy to the capital this weekend. Last Saturday, Simon Verbickas’ side would have been extremely pleased to pick up a welcome home win as the Wirral outfit narrowly beat Darlington Mowden Park. Despite a minor dip in form, Caldy are still having a very solid campaign and an away victory at Rosslyn Park would be the perfect way to enter the second half of the season.

After suffering a setback against Rosslyn Park in Round 13, Ampthill and District produced an immediate reaction last Saturday as they returned to winning ways against Birmingham Moseley. It was far from pretty for the A’s, but the victory means they are seven points off top spot as they take the trip to face Sale FC this weekend.

Head Coach Paul Turner will be demanding an improved performance in the North West on Saturday while the hosts will be keen to halt a slide in results. Sale come into this fixture having won just one of their last seven matches and their excellent start to their debut season in National One has slightly faded into the background. Jonathan Keep’s side are only four points above the drop zone so a first win at the CorpAcq Stadium for over two months would be most welcome for Sale FC.

It has not been the most wonderful time of year for Chinnor thus far. Since the beginning of the December, Matt Williams’ side have hit a bump in the road as successive defeats against Loughborough Students and Blackheath has seen them fall towards the back of the promotion race. The Black and Whites are now nine points off the leaders but, as we have seen already this season, Chinnor can produce a response and they will be hoping that occurs at Kingsey Road when they host Esher this weekend.

We have another busy weekend of rugby coming up, with @ChinnorRugby and @HenleyHawks both at home, while @OxfordQuins, @WitneyRFC and @BanburyRUFC will be hoping to sign off 2018 with victories https://t.co/pw9SN3tmtB

However, it won’t be straightforward for Chinnor as Esher arrive in Oxfordshire with confidence behind them after securing back to back wins. Victories over Sale FC and Loughborough Students means Rickey Nebbett’s side are now two points clear of the relegation zone. In fact, it is three wins from the last four for Esher so they will be keen to add to their excellent run this weekend.

Darlington Mowden Park fell to their third defeat in a row in Round 14 as they were narrowly beaten by Caldy away from home. Danny Brown’s men have really struggled for form over the last month or so and in truth, that has been a common theme throughout their campaign so far. The North East side currently sit in midtable, but they may fancy their chances of ending their losing streak when Cinderford come to town on Saturday.

While Darlington are seeking a much-need victory, Cinderford are in the same boat. It is now no win in four for Paul Morris’ side and this is their worst run of results for 20 months as the Foresters look to reignite their National One campaign. Because of the positive start they made to the season, it is easy to forget Cinderford were promoted back to this level in April, but the men from Dockham Road will be eager to end their drought when they visit the Northern Echo Arena on Saturday.

It was unfortunately the same old story for Cambridge at Volac Park in Round 14. Richie Williams’ side, who faced Rosslyn Park, failed to triumph at home meaning they have only picked up two wins on their own patch this term, but on the road, it is a different story. The Blood and Sand head into this weekend having secured four victories on their travels and the ninth placed side will be hoping for some more away success when they visit Birmingham Moseley.

After back to back wins, Birmingham Moseley fell to a defeat against Ampthill and District last Saturday, but there were certainly a number of positives to take from their trip to Dillingham Park. The loss against Ampthill may have seen the Midlands club fall back into the relegation places, but it looks as though Richard Protherough’s side have turned a corner in recent weeks. Moseley are one point from safety as things stand so a positive result at Billesley Common could allow them to move out of the drop zone as we reach the halfway point in the campaign.

Two of the division’s bottom four clubs collide in the Midlands this weekend as Plymouth Albion travel to Loughborough Students. The visitors would have been delighted to end a five-game losing streak in Round 14 as a hard-fought win over Sale FC lifted Kieran Hallett’s side out of the bottom three and a point clear of the relegation places.

Plymouth will now have a chance to distance themselves further from trouble when they take on a Loughborough side that still remain at the foot of the table. Last Saturday’s fixture with rivals Esher did provide an opportunity for the Students to move out of the drop zone, but a narrow defeat means Alan Buzza’s side are now five points from safety. However, Loughborough have another chance to really enhance their survival chances this weekend and they will be looking to grab it with both hands.

Don't forget to listen to our brand new NCA Rugby Podcast for all your latest National League news!