OEs defeat Bishop's Stortford to go clear at the top 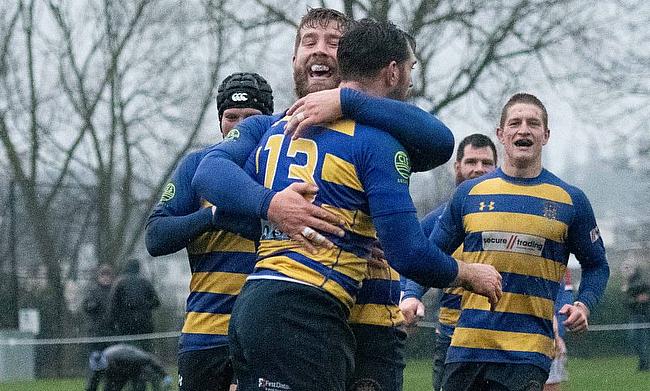 Old Elthamians have not lost in 10 matches
©Ian Carter

Blackheath set for promotion test against Rotherham
Old Elthamians trade places with Blackheath at the summit
Esher host Loughborough in vital clash towards the bottom
Esher, Moseley and Loughborough begin December on a high

Old Elthamians have some breathing space at the summit of National One after victory over Bishop’s Stortford at College Meadow.

Gavin Lach’s side are now unbeaten in their last 10 matches and their latest result means OEs are four points clear of second placed Blackheath, who lost to Rotherham Titans in Round 15.

Rosslyn Park are now right on the heels of Blackheath following their victory over Caldy while wins for Ampthill & District and Chinnor have kept them in the promotion conversation.

Down at the bottom, Birmingham Moseley were able to move out of the relegation places after they beat Cambridge and Plymouth Albion’s win over Loughborough Students has seen them move away from trouble.

Elsewhere in National One, Darlington Mowden Park climbed into the top half of the table after a narrow home triumph against Cinderford.

Tom White scored 12 points as Old Elthamians beat Bishop’s Stortford to extend their lead at the summit of National One.

A tight first half saw the hosts open up a 7-3 advantage thanks to a converted score from White, with Tom Banks replying for Bishop’s Stortford.

The league leaders increased their advantage after the break as White nudged over a penalty and OEs wrapped up the win when the fly-half converted James Golledge’s try after a loose pass from Stortford.

Blackheath are now four points behind leaders Old Elthamians as their nine-match unbeaten run came to an end against Rotherham Titans.

After poor weather overnight, a possible postponement was on the cards at Clifton Lane and the conditions made for a physical match in Yorkshire.

Andrew Daish grabbed a converted score for Blackheath while Rotherham were awarded a penalty try to level the contest in the second-half.

But, an Alex Dolly penalty proved decisive as the Titans extended their winning streak to four matches.

Rosslyn Park are level on points with second-placed Blackheath after a solid victory against Caldy at the Rock.

The home side took control in the first period and led 21-3 at the break following tries from Greg Gillanders, Paul Doran-Jones and Arthur Ellis.

A Charlie Amesbury try just after the hour ultimately wrapped up the win for Park.

Caldy did respond through Stuart Cross, but the visitors couldn’t add to their tally in the remaining 15 minutes.

Winger Will Foster helped Ampthill and District keep pace with the front-runners as they secured their seventh home victory against Sale FC.

After fighting hard to achieve a victory over Birmingham Moseley in Round 14, this was a professional performance by the A’s, with Foster scoring twice.

Aleki Lutui and Sam Hanks also crossed for the home side, who are now six points off top spot.

As for Sale, they could only manage a penalty from Kieran Wilkinson and a converted try as they slipped to a fourth straight defeat.

Chinnor brought a mini blip to an end with a battling victory over Esher at Kingsey Road.

Paul Roberts and Greg Goodfellow exchanged early penalties before the visitors went in front following a Joe Beckett try and another three points from the boot of Roberts.

But, Chinnor hit back as Will Bordill touched down before the break to leave the score at 13-10.

Kariym Irving’s effort extended Esher’s advantage, however, a converted try from Greg King made it a one-point game.

Chinnor’s fightback was complete when George Oliver scooted over and despite a tense finale, the home side held on for their first win in December.

Strong defensive displays from both sides ensured the game remained tight, with Gary Law’s converted try the only points scored in the first half.

Cinderford hit back after the restart as Jake Morris incepted a loose pass to canter over and level the contest.

However, there was to be late drama as Seals struck the decisive blow only after Law had missed a drop-goal attempt of his own for DMP.

Plymouth Albion secured back to back wins after a victory over Loughborough Students in the Midlands.

Albion led 7-3 at the break thanks to a try from flanker John Kelly which was converted by Fraser Honey.

Jamie Salter crossed for their second after half-time and he was able to double his tally before Dan Collier sealed the bonus-point victory to move Albion three points clear of the relegation zone.

The Students could only muster up two penalties on a difficult afternoon for the division’s bottom club.

Birmingham Moseley moved out of the bottom three after clinching a victory over Cambridge at Billesley Common.

The Midlands side’s win, combined with Esher’s defeat at Chinnor, meant they leapfrogged the Surrey outfit and now Moseley are one point clear of the drop zone.

But Moseley hit back as James Williams and Sam Brown both dotted down in the second period to wrap up a third win from their last four games for Richard Protherough’s side.