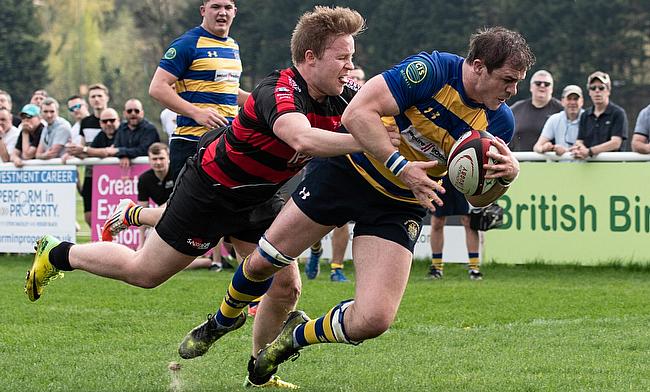 Blackheath will be out for revenge when they visit near neighbours and title rivals Old Elthamians on Saturday in the final game before the Christmas break in National One.

As things stand, OEs sit four points clear at the summit after extending their unbeaten run to 10 matches in Round 15 while Blackheath slipped to a defeat against Rotherham Titans.

‘Club’ also lost 21-10 against Old Elthamians back in September so derby day delight would be the perfect way to round off 2018 for James Shanahan’s side, but Gavin Lach’s men will be keen to continue their sensational form.

Keeping a close eye on proceedings at College Meadow will be third-placed Rosslyn Park who are level on points with Blackheath ahead of their own clash with Bishop’s Stortford in Round 16.

Elsewhere, Birmingham Moseley will be aiming to maintain their positive run of results when they travel to Cinderford while Plymouth Albion take on Esher and Cambridge go up against Loughborough Students.

This game needs no introduction and it will certainly be a Christmas cracker to conclude 2018. The top two sides in National One meet in Round 16 as league leaders Old Elthamians host local rivals Blackheath. OEs are currently four points clear at the summit after extending their unbeaten run to 10 games last week. Gavin Lach’s men produced another solid display to see off Bishop’s Stortford and the table toppers could make a huge statement if they can do the double over their near neighbours on Saturday.

MATCH PREVIEW ??|
"We won't place too much pressure on ourselves," insists OEs boss as @ElthamiansRFC and @Blackheath_1858 go head to head at College Meadow tomorrow in the race to be Xmas??number 1??!
?? https://t.co/WD4jv8d2gm #Nat1 @nca_rugby @national1_rugby @TalkRugbyUnion pic.twitter.com/IyVTFYXqdj

Blackheath take the 10-minute trip to College Meadow after suffering their first defeat since the end of September. James Shanahan’s side were narrowly beaten by Rotherham Titans in Round 15 and now they are chasing OEs. In a way, this is the perfect game for ‘Club’ because they have an immediate opportunity to cut the gap at the top and after losing to their rivals at the beginning of the season, Blackheath will be out for revenge this weekend.

If both Old Elthamians and Blackheath could lose in Round 16, that would the perfect scenario for third-placed Rosslyn Park. Of course, that is an impossible outcome so Kieran Power’s side will just focus on themselves as they continue to strengthen their own promotion ambitions. The men from the Rock are just four points off the top following their fourth consecutive victory against Caldy last week and they will be hoping to maintain their excellent form away at Bishop’s Stortford.

Stortford come into their final game of the year desperate for an early Christmas present. Andy Long’s side have picked up just one win from their last nine matches and their tough run of recent fixtures continues in Round 16. The men from Silver Leys are currently in the bottom three and seven points from safety so can they upset the odds this weekend to end 2018 on a positive note?

Two sides who are arguably still in the promotion conversation meet at Dillingham Park this weekend as Ampthill and District host Chinnor. The A’s come into this contest six points behind league leaders Old Elthamians following a run of just one defeat from their last eight matches.

.@ChinnorRugby have been an exciting addition to @national1_rugby. With half of the season gone, DoR Matt Williams talks to @TheOxfordMail about life in the third tier https://t.co/7Z6ZSKF06T pic.twitter.com/ixtOcJnVec

The Bedfordshire outfit will be looking to keep pace with the front-runners heading into 2019, but they will face a Chinnor side who they lost 38-33 to back in September. The visitors will be extremely pleased with their debut season in National One as Matt Williams’ side currently occupy sixth place at the halfway point in the campaign. The Blacks and Whites have had a wonderful year following promotion from National Two South and they will be keen to wrap up the past 12 months with their ninth victory of the season.

Rotherham Titans did their promotion ambitions the world of good in Round 15 as they ground out a narrow victory against title rivals Blackheath. After a minor blip in form, Joe Barker’s men are firing on all cylinders once again and they come into this clash with Darlington Mowden Park on the back of four straight wins.

The Yorkshire club are seven points off the top so they will be hoping their Christmas spirit remains high when they entertain DMP this weekend. The visitors to Clifton Lane saw Warren Seals deliver the goods last week as his late drop-goal sealed a first victory in December for Danny Brown’s side. The North-East outfit defeated Cinderford and now they will have their sights set on an away win as they aim to maintain their place in the top half of the division.

Caldy will want to enter the Christmas break by returning to winning ways and the seventh-placed side host Sale FC this weekend. Simon Verbickas’ men were beaten by promotion chasing Rosslyn Park last time out in terrible weather conditions, but back at Paton Field, they will be keen to end the year with a victory under their belt.

The Wirral outfit narrowly lost to Sale in the reserve fixture in Round Two and the men from the CorpAcq Stadium will be hoping for a similar outcome after a tough run of recent results. Jonathan Keep’s side have lost their last four matches and their dip in form means they are now just one point above the relegation zone. The side promoted from National Two North back in April need to recapture their early season momentum and a win against Caldy could reignite their campaign heading into 2019.

No-one likes to lose a game late on and for Cinderford, it was sucker punch which they could have done without. A drop-goal from Darlington Mowden Park’s Warren Seals denied Paul Morris’ side their first victory since the middle of November and now the Foresters haven’t tasted that winning feeling for five games.

Their loss in Round 15 saw them move into the bottom half of the table, but they will be hoping for a reaction at Dockham Road when they host Birmingham Moseley this Saturday. However, the visitors arrive in Gloucestershire with confidence behind as three wins from their last four games has guided them out of the relegation places. Moseley are now one point clear of the drop zone so Richard Protherough’s side will be keen to wrap up a successful December with another victory to add to their recent wins against Esher, Plymouth Albion and Cambridge.

You wouldn’t blame Plymouth Albion if they had already had a few early Christmas drinks. Kieran Hallett’s side were on a five-game winless run, but back to back victories against Sale FC and Loughborough Students has sparked their season back into life. Albion have propelled themselves up to 10th in the table and they are now three points ahead of the drop zone as they prepare to host Esher.

Like Plymouth, Esher also recently beat Sale FC and Loughborough Students, but after moving out of the bottom three, they now find themselves back in the relegation places. Ricky Nebbett’s side have suffered back to back defeats and they are now one point from safety heading into their final game of the year. The Surrey-based side narrowly lost 24-21 to Albion back in September so they will be eager to reverse that result at Brickfields this weekend.

Cambridge fell to their second defeat on the trot in Round 15 as they were beaten by Birmingham Moseley and head coach Richie Williams has called for his players to remain concentrated if they are to see an upturn in results. The Blood and Sand have failed to pick up any points since beating Darlington Mowden Park at the start of the month, but they have the opportunity to put that right when they take on Loughborough Students this weekend.

The men from Volac Park also have the chance to claim just their third home win of the campaign against the division’s bottom club and Loughborough will arrive in Cambridge aiming for a reaction. After a run of good results and encouraging performances, the Students failed to strengthen their survival bid in recent games against rivals Esher and Plymouth Albion and it means the Midlands club are now eight points off safety. While bonus-points have been hard to come by for Cambridge, Loughborough have collected 12 from their first 16 games. This has kept them in the fight to avoid the drop so a victory at the weekend would be ideal as they aim to continue digging themselves out of trouble after Christmas.