Old Elthamians trade places with Blackheath at the summit 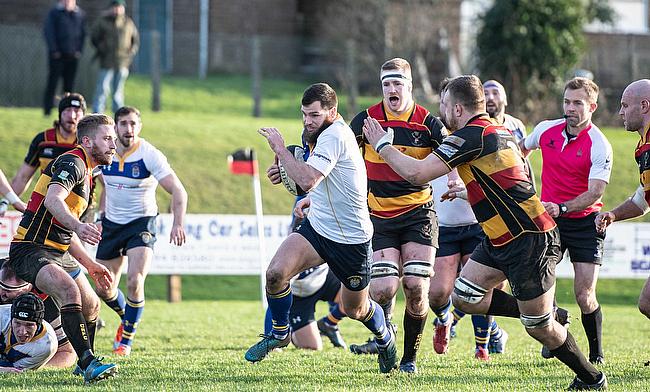 Old Elthamians and Blackheath both extended their unbeaten streaks in National One, but the teams have swapped positions at the top of the table.

OEs now lead the way after securing a bonus-point win at Cinderford while Blackheath were unable to pick up maximum points from their excellent victory over Chinnor on Saturday.

The gap between the front-runners is just a single point with third placed Rosslyn Park still in pursuit of the leading pair after they beat Cambridge.

The bottom half of National One is starting to become tight and Plymouth Albion were able to move out of the relegation places on the weekend following their win over Sale FC.

Esher continue to distance themselves from danger as they edged past rivals Loughborough Students while defeats for Birmingham Moseley and Bishop’s Stortford leave them in the drop zone.

Also in National One, Caldy picked up a narrow win over Darlington Mowden Park in Round 14.

Old Elthamians moved to the summit of National One following a bonus-point win at Cinderford, who are now without a win in four games.

After seven minutes, Tom White landed a penalty for the visitors, but Cinderford went in front when Sam Smith dived over.

FULL-TIME ??|
Exceptional performance and result from the boys. pic.twitter.com/jBtp9MK4Vr

However, OEs led at the break as Alex Brown touched down before Kieran Moffat raced in.

Soon after the interval, full-back Charlie Dockery scored for the away side and then Ollie Claxon darted across the whitewash for OEs’ fourth try of the afternoon.

Brown grabbed his second as OEs rubber stamped their third win on the spin, while Cinderford’s final score came via a penalty try late on.

Blackheath have extended their unbeaten run to nine matches, but they dropped to second in the league standings despite an excellent victory against Chinnor.

James Shanahan’s side were unable to pick up a bonus-point at Well Hall so they have been leapfrogged by Old Elthamians in the title race, however, the hosts would have been pleased to defeat one of their fellow promotion candidates.

Craig Holland went over to put Chinnor in front early on after Joe Tarrant had given Blackheath the lead from the tee.

Another two penalties from the boot of Tarrant made sure ‘Club’ had regained the advantage before the break and the full-back also kicked another six points after the interval.

Back row Will Bordill got Chinnor’s second try to bring the visitors to within a point of Blackheath, but Jake Lloyd grabbed the home side’s first score of the afternoon to seal the victory.

Ellis and Mills both touched down in the first-half with Greg Lound’s penalty giving Park a 17-3 lead after the opening period.

The hosts could only manage one try following the restart as Kwaku Asiedu scooted over, but a solid performance from Park gave them a deserved win, which leaves them five points off the leaders.

Rotherham Titans are up to fourth in National One after defeating Bishop’s Stortford in a tight contest at Silver Leys.

Joe Barker’s side have won their last three games and are now seven points off table toppers Old Elthamians.

Rotherham Titans win 22-20 at Bishop's Stortford, their third victory on the trot. Keeps them in contention near the top of National One. @RotherhamRugby #titans

The Titans did fall behind early on in this contest as Dan Elsom dotted down, but they were able to respond through Eruini Wano.

Nick Hankin dotted down to put the home side back in front, but tries from Jamie Ure and Seb Nagle-Taylor gave Rotherham a 19-15 lead at the break.

Ellis Abrahams’ second-half penalty gave the Titans a seven-point cushion, but they were made to cling on for their victory as Joss Linney darted over for Stortford, but the hosts failed with the conversion.

After a defeat to Rosslyn Park, Ampthill and District returned to winning ways as a strong second half display helped them to a victory against Birmingham Moseley.

The score was level at 10-10 at the break as Moseley tries from James Williams and Buster Lawrence were cancelled out by Billy Johnson and the boot of James Pritchard.

Spencer Sutherland latched on to a Gavin Williams kick to give Ampthill the lead after half-time, but James Williams responded for Moseley to put the visitors in front.

However, Karl Garside’s converted score and a late penalty from Pritchard secured the win for the A’s at Dillingham Park.

A try from DMP captain and lock Jacob Brady gave the visitors the lead, but just before the interval, Caldy hit back as Luke Hibberd dotted down.

The hosts scored nine points after the break and they all came via the boot of Ben Jones while Darlington’s Gary Law landed a penalty of his own.

Plymouth Albion ended a run of five straight defeats as they beat Sale FC to move out of the bottom three in National One.

The match report for our home game against Sale FC is now ONLINE...

Testing weather conditions contributed to a tight affair at Brickfields, but George Mills’ try opened the scoring before Jonty Rawcliffe levelled things up before half-time.

Mills darted over for his second soon after the break with Connor Eastgate adding the extras and despite Sale pushing for an equalising score, Albion held on for a much-needed victory.

Esher secured back to back wins to move two points clear of the relegation places as they beat rivals Loughborough Students at Molesey Road.

Basil Strang’s try and a Paul Roberts penalty gave the hosts the lead at half-time, but Loughborough stayed in touch with a score of their own.

After the break, Students’ Harry Priestner went over to put Loughborough in front, however, a second try for Esher on the hour proved to be enough to clinch an important victory for Ricky Nebbett’s side.