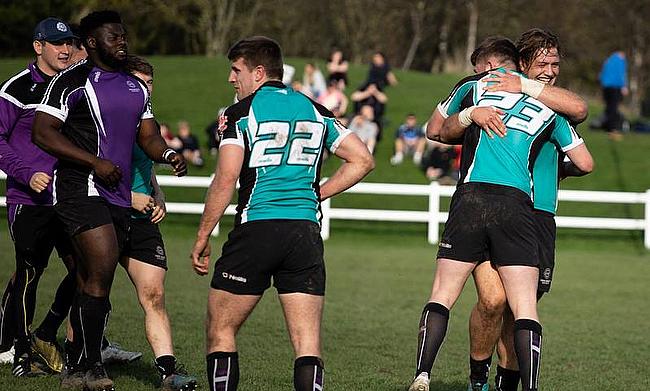 Leeds Beckett University and Hartpury University will contest the BUCS Super Rugby Championship final on April 10th after excellent victories in the last four of the competition.

Beckett upset domestic champions the University of Exeter at Topsham to book their place in their maiden Super Rugby final while current Championship holders, Hartpury, defeated the University of Bath to secure a spot at Twickenham for the third successive year.

Durham University and the University of Exeter will battle it out in the Women’s Championship final at England HQ following wins over Hartpury and Cardiff Met, respectively.

Below is a full round-up of yesterday’s action plus, we take a look at some of the key rugby results from BUCS’ Big Wednesday in Nottingham.

Leeds Beckett University beat the University of Exeter to seal a place in the BUCS Super Rugby Championship final as Kerry Wood’s men stretched their unbeaten run to 11 matches.

Beckett opened the scoring after 11 minutes to hold a 7-0 lead and the visitors doubled their tally just before half-time thanks to their second try of the afternoon.

WE ARE GOING TO TWICKENHAM!

Josh Pieterse touched down shortly after the interval to bring Exeter back into the contest, but the domestic champions fell further behind on 63 minutes as Steff James charged over.

Ben Phillips and Harry Bazalgette both crossed to reduce the arrears in the final six minutes, but it was too little too late as Beckett booked their place at Twickenham.

Hartpury University secured their spot in a third consecutive BUCS Super Rugby Championship final after beating the University of Bath in an absorbing battle at the Gillman’s Ground.

A try by Angus Hinton briefly brought Bath back into this encounter and scores from Miles Reed and James Hadfield also kept the Blue and Golds in touch with their hosts.

With the game at 34-27 in the final 10 minutes, the away side were given some hope when both Harry Wilson and Aiden Burnett where yellow-carded, but it was Bath’s lack of discipline which eventually cost them as Nathan Chamberlain rounded off proceedings with his third penalty of the evening.

Sean Lynn’s side will now be heading to Twickenham for the third year on the spin as they look to retain their BUCS Super Rugby Championship crown.

Hartpury Head Coach Sean Lynn: “The boys played for each other. You can see today was a great day for Hartpury Rugby.

On the final: “Full respect to Leeds. They beat us here and we nipped it at the end up there so it is going to be a tough one and that’s what it is about. BUCS Super Rugby is entertaining!

Man of the Match Toby Venner: “It was one of the most intense games I have played in in a long time. You could tell both sides were up for it, but it was a hell of a game to be a part of.

“A lot of respect goes to Bath. When you thought they were dead and buried, they would come back and score a try. They are a great side and put up a great fight.

“We said quite a few times in the week leading up to this game, if you can’t get up for semi-final rugby you are in the wrong place. It was such a class game to be a part of.”

Aaron James, Head of Rugby at Bath told the club website: “We’re obviously disappointed for a lot of reasons but at the end of the day I think they controlled our driven maul really well.  And we gave away too many penalties although we got close at times, too”.

Bath Captain Alex Burrage said to Team Bath: “This is a tough one to take for the boys. I thought we performed well especially in the second half and got a bit of a momentum shift but Hartpury put in a great performance and starved us of a lot of possession”.

The University of Exeter are off to Twickenham for the second year running after defeating Cardiff Met in the BUCS Championship semi-finals.

The current holders were excellent in first half as they scored four tries including a brace from Kim Grundy and Clara Nielson’s effort.

A brilliant performance from Exeter, with those tries in the first half laying the foundations for the win.
Twickenham awaits where we will face Durham.

Commiserations to @cardiffmetwrfc who more than played their part in a hugely entertaining game of rugby.

Met did dot down on one occasion to make it 26-7 and the visitors were the only side to score after the break.

The Welsh outfit capitalised on Holly Cunningham’s yellow card to reduce Exeter’s lead to 14-points, however, Met’s final try came right at the death as Jo Yapp’s side held out for the win.

Durham University’s scintillating season continued in the BUCS Championship semi-finals as they comfortably beat Hartpury University to advance to Twickenham.

Durham, who have now won 12 successive games this term, led 22-0 at the break thanks to tries from Lydia Crossman, Anabel Lee and Coreen Grant.

The Premier North champions increased their lead immediately after half-time with a fourth try and despite a response from Hartpury, Grant grabbed her second to keep Durham in charge.

The visitors did cross again, but the home side had done enough in the first half to book their place in the BUCS Championship final.

A day of triumph for Hartpury’s men’s teams continued in the BUCS Vase final as their 2nd XV defeated the University of Bristol 59-12. The victory caps off a wonderful year for Hartpury, who also won the South A title this term.

Another outstanding season from the best 2nd team in university rugby... https://t.co/8kz14wXcUw

However, Hartpury couldn’t follow up their success in the BUCS Trophy as their 3rd XV lost 31-27 against North B outfit the University of Glasgow.

De Monfort University were unable to retain their Midlands Conference Cup crown as fellow Midlands 2B side, Loughborough 4ths, won 43-12 in Nottingham.

Stay tuned to TRU's #UniRugby coverage as we will be bringing you highlights from Leeds Beckett's win over Exeter in BUCS Super Rugby.