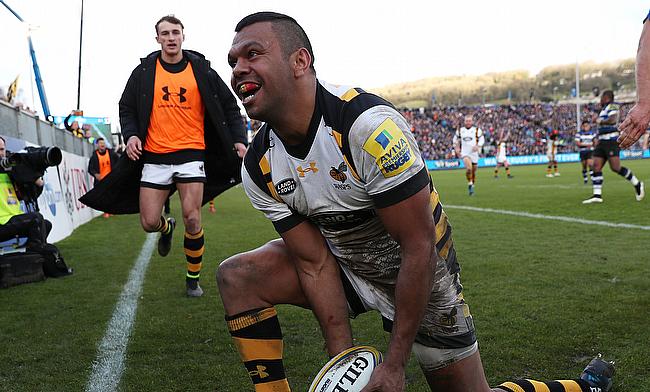 Kurtley Beale was the star of the show for Wasps
©PA

Kurtley Beale scored a double while Jimmy Gopperth contributed with nine points as Wasps completed a 3-24 victory over Bath in their Aviva Premiership clash at Recreation Ground on Saturday.

The win has consolidated Bath's position at the top with 64 points from 17 matches while Bath are positioned at fourth with 48 points.

The first half saw Christian Wade and Beale crossing over for visitors in the 12th and 24th minute respectively while Gopperth added conversion on both the occasions to take them to 14 points in the first half.

Tom Homer scored a penalty at the stroke of half time and that remained the only points for Todd Blackadder's men in the game.

Gopperth stretched Wasps lead to 14 points with a penalty in the 48th minute following which Beale crossed over for the second time in the game as Dai Young's men completed a 21-point win.

Wasps boss Young was satisfied with his team's performance against Bath but is wary of the challenges that lie ahead.

"Today we took a big stride in cementing our place in the top four. That's the important thing. Then you've got four games to cement ourselves in the top two.

"It's not a foregone conclusion by any means.

"This is the best we have played in the block of four games.

"Now we are in the business end. We've got Worcester and Bristol, two teams who will be scrapping for their lives. There's no easy games for us but we are in a very strong position, one I am very pleased with."