Aviva Premiership U20 players to watch 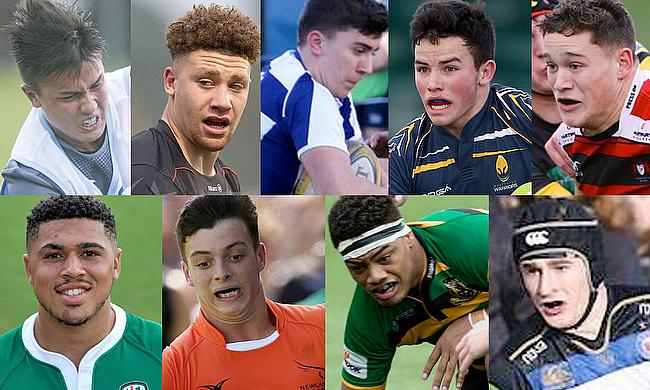 The 2017/18 Premiership season is almost upon us and the sense of optimism among fans of all 12 clubs is tangible.

Whilst summer signings draw the headlines and give fans the most cause for excitement, it can be the emergence of a young, homegrown star that more positively impacts a club’s season, whether that’s challenging for a title, pushing for European qualification or fending off relegation.

We look at some of the most promising U20 players in the Premiership who can make that leap to senior stardom this season, just as Zach Mercer and the Curry twins did in the last campaign.

A similar look at the Guinness PRO14 starlets will arrive next week.

We may as well start with an obvious one, right?

Smith recently made England’s three-day preseason training camp and even had Eddie Jones proclaim him as England’s fourth-choice fly-half.

It is highly, highly – this could go on for a while – unlikely that Smith is actually fourth in the pecking order. For all his phenomenal potential – and the sky really is the limit – he has yet to make his Premiership debut and international rugby is still a way off.

He reads the game excellently, has the vision and technical skill to pull apart defences and shows impressive game management for a player so young.

He is clearly on the fast-track to higher honours, but patience is a virtue. He should have an opportunity to make an impact for Quins in the A League and Anglo-Welsh Cup and then push for Premiership playing time.

Gabriel Ibitoye and John Okafor should both be on the radar at Quins, too.

Another rather obvious one, with Isiekwe having won two senior international caps already.

The signings of Will Skelton and Dom Day certainly create competition for the lock, but with Maro Itoje and George Kruis both likely to be busy with England this season, there will be plenty of opportunities for Isiekwe. In fact, it would not be surprising to see Isiekwe knocking on the door of the Itoje-Kruis engine room combination by the end of the season.

Bursting onto the scene so young has seen many people compare him to Itoje, but in terms of his playing style, he is probably a more similar player to Kruis. He is that bit more naturally solid, can already run a lineout and there’s even an element of Kyle Sinckler to his game, with great hands and passing on the gain-line and as a first receiver.

He has another year of U20 eligibility still to serve if he wants, but expect Saracens and England to have bigger plans for him.

As with Quins, it’s not just Isiekwe capable of breaking out at Saracens this season, with Ben Earl also likely to be sniffing for playing time.

One of a host of Sale academy players to be given five-year senior deals in the last few weeks, Redpath is the most likely to follow in the footsteps of the Curry twins and make the breakthrough this season.

Of course, the Curry twins are also still U20, but flagging them here would seem a bit unnecessary.

Redpath is a physical inside centre who has the frame and size to make that step up to senior rugby as an 18-year-old, but that should not detract from the impressive technical ability that he also brings to the mix.

Having spent a significant amount of time at fly-half, his ball-handling and playmaking is as adept as you would expect it to be, he has a strong kicking game and the confidence to take on defenders.

It won’t be easy to break into a midfield of Sam James and Will Addison but look for Redpath to feature as Sale rotate their squad and compete in the Challenge Cup.

Another talented centre, Butler is a year ahead of Redpath in his development, but also faces a tough position battle, with Ben Te’o and Wynand Olivier leading the way at Sixways.

Butler made his senior debut for the club last season in the Challenge Cup and had a good campaign for the England U20s, where his instinctiveness and ability to run incisive lines cut open many a defence.

He is not the biggest centre but he certainly doesn’t shirk his defensive responsibilities and wouldn’t look out of his depth playing senior rugby.

If Te’o continues to play a role for England, there should be chances for Butler this season, especially as the duo of Te’o and Olivier are both in their 30’s and Worcester will want to ensure a smooth transition to the next generation in their midfield.

Another name to watch here is Ted Hill, a remarkably physical second row/No 8. As a 17-year-old, he was dump tackling sizeable Italian props and locks in the U20s.

Having confirmed the move of Jonny May to Leicester in return for Ed Slater, Gloucester fans will be eager to see who fills May’s berth on the wing.

New addition Jason Woodward will be favourite, closely followed by Henry Purdy, David Halaifonua and Ollie Thorley, but don’t rule out Seabrook getting some playing time this season, despite entering just his first year of U20 eligibility.

Don’t expect to see Seabrook starting in the Premiership straight away but he is a lethal finisher and a player capable of translating his prolific age-grade scoring to the senior game, especially in a Gloucester side that may look to inject the same kind of tempo into their game that Johan Ackermann prized with the Lions.

Kingsholm has become a bit of a factory for pace men on the outside and Seabrook can prove this season that he is the man to fill May’s boots in the long-term.

Gloucester have bolstered their front row in the offseason, but don’t rule out the trio of Henry Walker, Alex Seville and Ciaran Knight, either. Walker has a particularly good shot, with the cupboard a little bare at hooker behind Richard Hibbard and Motu Matu’u.

Wait, what about Joe Cokanasiga?

As with the Curry twins, Cokanasiga has already made that step up to senior rugby, having broken into the Irish first XV last season in the Championship, whilst an injury early in the season unfortunately denied Curtis-Harris the same opportunity.

With avoiding relegation the priority this season, don’t expect the young back rower to be thrown in at the deep end, but playing time is there to be had in the A League, Anglo-Welsh Cup and Challenge Cup.

He shone as an U18 player at No 8, helping Irish to the 2015/16 U18 Premiership title, but his slighter frame back then perhaps suggested a move to the flank might be the next step for him.

That year out of school has seen his frame fill out considerably and he now looks to have the power and durability to cope with senior rugby at No 8, not to the mention the technical skill that was a big part of making him a success at U18 level.

Keep an eye out for Ben Loader, too.

Radwan has lit up the Singha Premiership 7s for two seasons now and he is still just 19 years of age.

Having spent last season playing for Darlington Mowden Park in National League 1, Radwan has a year of senior rugby under his belt already and whilst it was not played at Premiership level, it will have been a valuable acclimatising experience for him.

His biggest challenge comes in the forms of incumbent wings Vereniki Gonva and Sinoti Sinoti, who have both been impressive on Tyneside, as well as new signing D.T.H. van der Merwe. It is worth nothing, however, all three of those wings are in their 30’s and as with Butler and the centre combination in Worcester, there is an opportunity to begin a transition to a younger player this season.

Radwan’s electric pace and footwork are his greatest assets and should help him catch the eye in training, whilst he works on rounding out the rest of his game.

You may recognise the name here, with Devante’s older brother Jordan featuring intermittently for Northampton in the second row, as well as being a part of England’s 2014 Junior World Championship side.

Devante as played at both No 8 and in the front row, but it is at the former where he could make an impact for Northampton this season, following the departure of Louis Picamoles.

Teimana Harrison would be the logical choice to fill the void and should do so in the Premiership, but Onojaife is another player who can make the most of the opportunities that the A League and Anglo-Welsh Cup offer.

Long-term, Onojaife could be the power carrying option that Picamoles and Samu Manoa provided Northampton with previously and his senior rugby education should begin in earnest this season.

The half-back cupboard is well-stocked at Northampton, but don’t rule out Alex Mitchell or James Grayson getting some playing time, either.

Bath found themselves stretched thin in the backline at times last season, with injuries and international call-ups all contributing to a disappointing second half of the season.

Todd Blackadder comes from the New Zealand school and having a back three loaded with players who have what is traditionally a full-back’s skillset is something that is highly-prized and that could be a way into senior action for Partington.

An incisive counter-attacker and adept tactical kicker, Partington is built in the mould of the interchangeable back three players that run rife in New Zealand rugby.

The likes of Darren Atkins and Harry Davies have seniority, but do not be surprised is Partington comes in under the radar, much as Mike Haley did with Sale a few years ago.