Anton Petrowitsch: 'I know I have to move to Europe if I want to achieve great things' 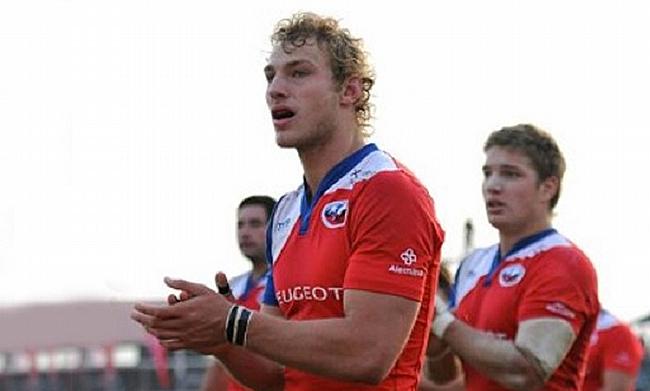 'I was proud to play for my country, but I knew I had to move away,’ Anton Petrowitsch says.
©TSMC

Gloucester scrum-half Ben Vellacott: 'I fell back in love with rugby at the perfect time'
Nick Malouf: “I don’t think I could have picked a better club in the world for a new challenge”
Reiss Cullen: “Bristol was my first choice and I immediately said yes”

The Chilean international knows he has made a huge decision to leave his home country behind, but says moving to Portugal is the first step on the road to success.

When Anton Petrowitsch and I began chatting over email, it was not a particularly straightforward interview to organise considering we are separated by over 7,000 miles and a five hour time difference. It was certainly a unique interview for me and after speaking to Petrowitsch, there is no doubt that rugby itself is still very a new concept in his home nation of Chile.

For Petrowisch however, it is a sport which is not new to him. Throughout the numerous ‘Emerging Talent’ interviews TRU has conducted, this the first where my research failed to deliver all the necessary facts and figures about a player. In the past, we have spoken to players who ply their trade away from divisions in the UK, but Petrowitsch’s route to playing rugby in Europe is like no other.

Almost 12 years on from first taking up the sport, Petrowitsch has been signed by Portuguese side AAC (Academic Association of Coimbra) because he knew stepping away from South America in order to pursue his dream, had to be done. Granted, AAC is certainly not one of the most recognisable clubs in Europe, but Petrowitsch’s rugby career had to go down this route.

It seems as though this move to Lisbon is Petrowitsch’s ‘big break’ but he has certainly been making waves over in Chile. The back-rower was named in the recent America Rugby Championship’s Team of the Tournament and has tasted the Sevens stage having appeared in the Hong Kong 7s last year. “Playing for my country is something that really pumps me up and it represents everything I do and what I strive for.”

And as I read his answers back following our in-depth interview a few days after ACC officially confirmed his move from Chile, you can tell reaching the top level of this sport is something Petrowisch has never given up on. “I started playing at the age of 10 for my club Craighouse Old Boys & Girls as well as my school which is among the British Schools Association in Chile,” Petrowitsch says. “Rugby was pretty much the main sport and because my friends were into it, I started to play. In 2011, I went to Christchurch Boys High School in New Zealand for six months before getting recognised by Chile when I returned. When I was in New Zealand, I decided and knew that rugby was my life.”

It almost seems like Petrowitsch didn’t question moving to New Zealand at the age of 16 and that could well be the case. Considering how much work he has had to do to try and forge a rugby career in Chile, it seems as though nothing will ever faze him. “The problem we have is that the rugby is very centralised in Chile, Petrowitsch says. “There are also very few people like me that wish to play rugby seriously. In Chile, with me, it would be around 20 people playing overseas. And for players wanting to stay in Chile and play rugby for the country, we just don't have the infrastructure or support. I know that if I stayed in Chile, I would be doomed unfortunately.”

Despite only being 22 years old, Petrowitsch has certainly not left any stone unturned since he first began playing rugby in 2004. The Santiago-born player still lives in the capital and he has burst on to the international scene for his country over the last 12 months. He is fully aware that Chile is still behind the likes of Argentina, USA and even Uruguay in terms of rugby status in the west, but appearing for Chile in two, well respected competitions has only enhanced his game and his name which has helped open the door to a move to Europe.

“The ARC was an amazing tournament even though we did lose all our games!” he says.  “We played against Argentina XV in a soccer stadium in Chile with 4000 people supporting us. As for the Hong Kong 7s, we had 45,000 people watching which is real pumping! Playing in those stadiums is something that I will cherish for all of my life. I just want to help rugby in Chile in any way I can.”

Petrowitsch’s spell with Chile will be put on hold as he now moves to Europe. He admits the only thing keeping him in Chile, in terms of rugby, was the chance to qualify for the World Cup. His time in his home country, by his own admission, has been hard work but that graft and desire to follow his dream is now starting to come to fruition.

He believes the switch to Portugal was a move he had to make if he wanted to do ‘great things’, but after all he has been through, he knows it won’t be an easy ride. “I am confident, but don't want to be too confident. I'm just working hard every day and I am focused on my goals and what I have to do. It's going to be hard to adapt to a new team with new language. I will just do what I know; do my job, don't say much and act more. I know that once I get the feel of the team and get in a good rhythm physically, then there is only one way to go and that is up.”

‘The Pitbull’, as he was dubbed by American commentators during the American Rugby Championship due to his physical attributes, knows his end goal is to be playing in the Aviva Premiership. Having been brought up in a country where rugby is in transition, these are very much changing times for Petrowitsch and he is adamant of achieving his aim. “I don't expect to jump to Premiership after one season in Portugal. But, going to Europe and play rugby at my fullest? Yes, that is the first step to achieve my dreams.”