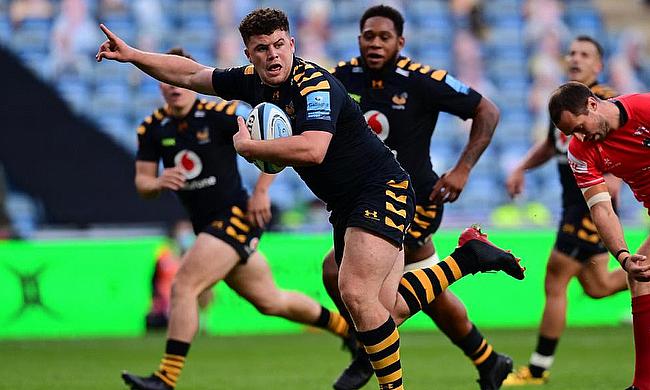 Alfie Barbeary one of the brightest young talents in English rugby has today been named Gallagher Premiership Rugby player of the month for December 2020.

The 20-year-old from Banbury made a huge impact in December for his club, finishing the month with more metres gained (295) than any other player in the League and was acclaimed by BT Sport’s Ugo Monye.

Monye said: "The games in which Alfie’s played he’s always been outstanding whether it’s been assisting tries or scoring tries himself or just running with real dynamism and purpose.

"He’s such a combative rugby player both sides of the ball. On his debut, he scored a hat-trick and his development has just accelerated even further since."

Barbeary has only played nine matches for Wasps in Gallagher Premiership Rugby but has spent time in the England camp, as he was outstanding in age-group rugby.

"He’s been immense. He’s catching the eyes of England head coach Eddie Jones who had him in camp during the Autumn Nations Cup, and this off of the back of just a handful of games. We forget he’s still so young and hasn’t played a lot of rugby but every single time he plays he always catches the eye," Gallagher ambassador, Monye added.

"I love his attitude; he looks like someone who just really enjoys playing his rugby. Every sportsman and woman understands that being able to do what they do in the midst of a pandemic is a real privilege.

"I think he shows that by the way in which he plays and forever has a smile on his face which is great for everyone to watch. When he’s got the ball in his hands he’s more than likely going to do something with it.

"I think he’s an international in waiting. He looks like quite a special talent. He’s got to make that transition into being a fully-fledged hooker if that’s where he sees his long-term future.

"When you look at what the game requires today in terms of physicality both sides of the ball as a prerequisite, he’s got that in abundance.

"He seems like an instinctive rugby player that understands the game with his running lines. Defensively, he doesn’t shirk his responsibilities as well.

"He will make it on the international stage and no doubt make a big splash there as well."

Although Barbeary’s recent ankle injury and Covid-19 restrictions prevented a physical presentation of his award, Wasps supporter and managing director of Gallagher’s local Coventry branch, Debbie Moss, said: "It’s brilliant to see Alfie named as the latest Gallagher Premiership Player of the Month – in these increasingly challenging times his impressive on-pitch adaptability, gritty resilience and determined possession are all qualities we admire now more than ever.

"Having helped fire Wasps to a fantastic Final last season, which brought some much-needed excitement as well as pride to the local Coventry community, Alfie’s ball-carrying ability and defender-beating in the opening rounds of this season have already set him apart and made him a definite ‘one to watch’.

"We also wish Alfie well as he recovers from his ankle injury and operation – Wasps fans and the wider rugby community alike look forward to welcoming him and his powerhouse play back onto the pitch as soon as possible."

Barbeary – as part of his prize for being named Gallagher Premiership Rugby Player of the Month – wins a shirt signed by the whole Wasps squad and framed by Gallagher to be gifted to a local club, school, community group or charity of his choice to help raise funds for these causes.

Barbeary was judged by a panel of experts as the player who made the biggest impact in Gallagher Premiership Rugby in December 2020.

He was involved in a three-way battle to win the award eventually beating Bristol Bears’ scrum-half Harry Randall and Exeter Chiefs’ back-rower Sam Simmonds to the award.