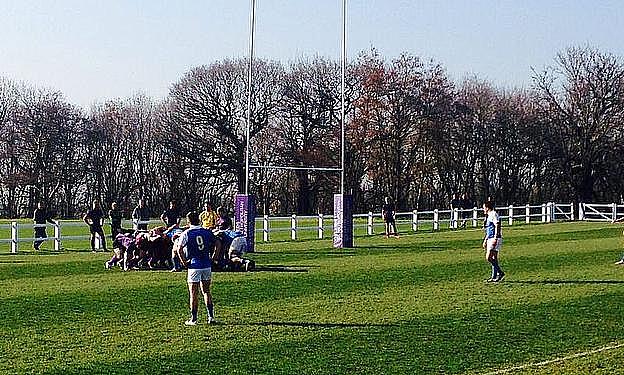 As we race towards the spring the 2013/14 BUCS rugby season is now just over a week away from its climactic finish at Twickenham stadium on the 28th of March.

Jour teams remain in the competition – two from the north and two from the south – each just 80 minutes away from a place in the final and the opportunity to fight for the title under the floodlights at Twickenham.

The first of the semis takes place in the north – Leeds to be precise, as the Metropolitan University and the new northern league Champions take on Exeter at their Carnegie sporting campus.

A starring season so far – Leeds Met are brimming with confidence from the first Premier league rugby title in their history and will go in the game knowing they can conquer another southern side after their punishing 34-21 victory over Bath in their quarter final last week.

Captain Will Cargill admitted that his side “were very happy with the win against Bath, but felt slightly disappointed with the performance.

“We felt like we were a good enough side to have put more points on Bath, especially with them travelling so far for the game, but they put up a great fight and disrupted our game plan well.

“I think we need to improve our structure going into the next round,” he continued, “they got into us well and didn’t allow us to play the way we wanted.”

Looking ahead to their semi-final this week, when Leeds Met have earned another home tie, Will added that “the boys are really confident going into the game; we fell like we are playing good rugby and know we have the depth in our squad, in both the first and second teams to do well in the competition.

“Usually we go into the playoffs as real underdogs having finished second or maybe third in the league, but this time we came top so that’s given us a whole world of confidence.”

This time, though, the boys from Yorkshire will be expecting a much tougher test as they take on Exeter.

The other West Country side had a solid league campaign this year, finishing in second overall on 41 points; having recorded some impressive wins. Most notably was a close-fought 11-9 victory over Hartpury – the now Championship favourites.

The men in green recorded another impressive victory last week, to add to their ever-growing list, in their quarter final with reigning Champions Durham.

The North Eastern side, who have been in the final at Twickenham for the last three years with two wins to their name, endured a disappointing league season by their high standards – finishing third in the north – had an away quarter final and the prospect of merciless journey down south to Exeter.

The journey, however, and Exeter, got the better of the reigning Champs as the home side powered through to an emphatic 26-3 victory.

Therefore, two teams who rarely meet will lock horns on Wednesday at Leeds’s Headingly Campus as they fight for their place at Twickenham.

Watch highlights of Leeds’s quarter final game with Bath below, where the Talking Rugby Union team bring you a BUCS exclusive!

On the other side of the country, just fifteen minutes later, the second BUCS semi-final will get underway at the University of the West of England’s, as southern Champions Hartpury (and many people’s tournament favourites) take on Loughborough.

Hartpury cruised to the top of the Southern Premier A League from the first game of the season and remained there for its entirety with an enormous 49 points to their name.

After such a powerful finish to the regular season, the Hartpury side earned a home quarter final tie against the fourth place side from the north – Northumbria.

However, the game was a lot closer than many had first thought, with the side from the North East, after a mammoth coach journey that morning, played one of their best halves of rugby, where they found there selves just a few points shy at the break.

Unfortunately, though, normal service was resumed in the second stanza, with Hartpury applying the pressure and grinding out the win.

The game finished 30-8 to the home side, who are now just one step away from Twickenham.

Finally, on the other side of the field will be one of the most consistent and best sporting Universities in the country – Loughborough.

The 2010 Champions have had three seasons out of the BUCS spotlight, concentrating on their great success in the national leagues; however, this season the BUCS 1s side were back on form with an impressive league season – finishing second, just a few points behind Leeds – and an impressive 16-13 victory over Cardiff Met in their quarter final last week.

Loughborough are always strong in all forms of BUCS sport and will be looking to pull-off a huge victory away from home at Hartpury on Wednesday.

After just 80 minutes of rugby on Wednesday we will have our finalists named – could it be an all-north, all-south or one of each who takes place on the hallowed Twickenham turf to fight it out for the BUCS rugby Championship.

Be sure to follow Talking Rugby Union online and on twitter for all the latest scores, news, reaction, pictures and videos from the BUCS rugby playoffs.