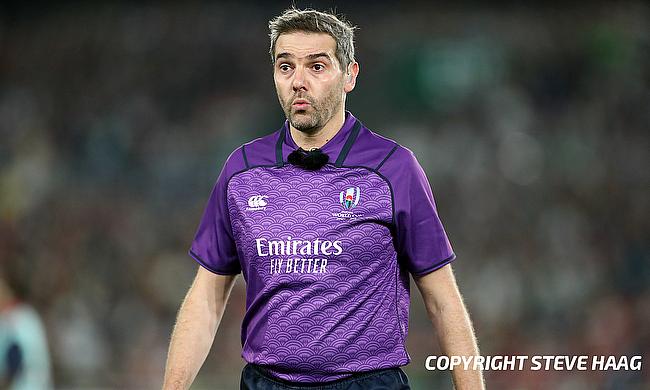 World Rugby has announced France referee Jerome Garces will be in charge of the World Cup 2019 final between England and South Africa to be played in Yokohama on Saturday.

Garcès, who has previously refereed in 55 Tests including 11 World Cup games will become the first French man to referee in a final of the World Cup.

"It is a dream as a referee, but this is a team sport, and as a team of four, we will be out there to do the best for the teams, the fans, the sport, but also the entire match officials team, selectors and support team, who have worked so hard over the last four years, culminating in Rugby World Cup 2019.”

The 46-year-old will be assisted by Romain Poite (France) and Ben O'Keeffe (New Zealand) along with Ben Skeen (New Zealand) as the Television Match Official.

Meanwhile, Wayne Barnes (England) will be refereeing the bronze game between New Zealand and Wales in Tokyo on Friday and will be assisted by Jaco Peyper (South Africa) and Pascal Gaüzère (France) and Marius Jonker (South Africa) as TMO.

“This has been one of the great Rugby World Cups, perhaps the greatest and there is significant excitement ahead of what promises to be an exceptional final between two former champions – England and South Africa," said World Rugby chairman Sir Bill Beaumont.

“Our match officials have played their full role in this special tournament and I would like to congratulate Jérôme and the team on their appointments, which are thoroughly deserved.

"I would like to wish them all the best for what promises to be a very exciting finale to Rugby World Cup 2019.”