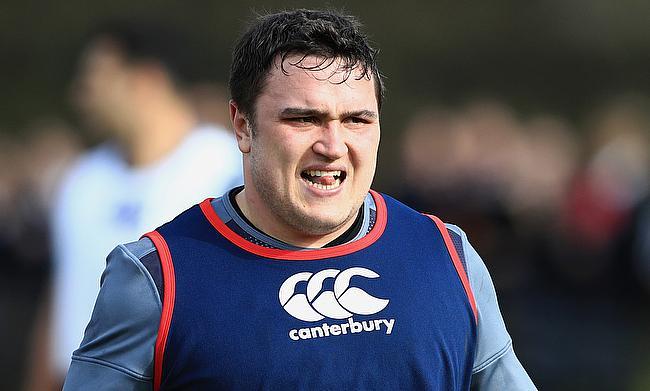 Jamie George’s relationship with England has been an interesting one over the past 12 months.

It was around this time last year that the hooker lost his place in the squad to Luke Cowan-Dickie, the Saracens man going on tour to South Africa with the British and Irish Lions in the summer, but when the Autumn Nations Series came around, he wasn’t in the squad.

He wasn’t the only one, with George Ford, Mako Vunipola and Billy Vunipola omitted from the side having been a regular for the entirety of Eddie Jones’ tenure as head coach, the Australian questioning some of his players’ desire to complete another World Cup cycle.

It took an injury to Cowan-Dickie for George to earn a recall, the 31-year-old parachuted into the matchday 23 at the first time of asking and has been ever present from that tome onwards.

Now the bona fide starter after Cowan-Dickie picked up a knee ligaments injury against Wales three weekends ago, George is one of the most experienced players in the England squad.

He feels the defeats more than most, the tone of his voice testament to that. Having watched on as Charlie Ewels saw a red card for a dangerous tackle on Ireland’s James Ryan 82 seconds into a hugely influential Guinness Six Nations clash, at the final whistle England had lost the game 15-32.

There was much to like about England’s performance at Twickenham, the side rallying for the better part of 60 minutes, drawing the scores level at 15-all for a time.

Ultimately the toll of being a man down told, the group heading to France with precious little on the line after an emotional outing.

“I was pretty bruised and battered on both fronts really,” George said. “The game was as physical a Test match against Ireland would ever be, but one man down, you might have to get through a little bit more work.

“The GPS stats were pretty impressive. In terms of headspace, it was a tough one really. I was so super proud of the group, really happy with a lot of elements of the game and the character that we showed, but bitterly disappointed that we couldn’t get over the line and couldn’t be going to Paris for the championship this weekend.”

England can do Ireland a favour this weekend if they beat the French as what will be a raucous Stade de France on Saturday night.

Andy Farrell’s team will have to uphold their own end of the bargain, the need for a bonus point win over Scotland firmly on their mind.

So much of this Six Nations has been spent talking about the ‘New England’, the side having a new attacking mindset and process with the new coaching staff amongst its ranks.

Now facing down the barrel of a potential fifth place finish, George says that this week has largely been focused on getting prepared mentally.

“Fundamentally, in terms of motivation, we shouldn’t ever really need an excuse,” George said.

“What I do think it that the messages we have had from the team is to take your breath, take your rests, get your head away from it a little bit, but when we come back into it, we need to make sure that we are very, very focussed in terms of the game plan we have in place, and in terms of where we are at mentally.

“We want to make sure that we get ourselves to that same emotional state that we were last weekend, and it is an opportunity for us to replicate what might be going on in 18 months’ time; going to the Stade de France and trying to make sure that we win those big games, and this is a huge game for us and we want to finish the tournament off well.”

France are in somewhat uncharted territory coming into this weekend. Having not won the Six Nations since 2010, Fabien Galthie’s golden generation must now win the tournament to really put their plan of winning the World Cup next year into action with a victory over the old enemy in their own backyard to secure the Grand Slam.

In recent years, England have been in this situation plenty. Since Jones took charge of his first campaign in 2016, England have won just the one Grand Slam and in 2017 were well beaten by Ireland on the hunt for another.

To this day a clean sweep remains one of the hardest things to achieve, whilst France’s recent performances have left something to be desired, losing last year at Twickenham 23-20, just several months after losing the Autumn Nations Cup final to the same opposition.

Full in the knowledge of what his opposition are hoping to achieve, George is hoping to end the tournament on a high with several months before England regroup for a tour of Australia.

“There is a huge amount of pressure on it for those guys,” George said. “The thing that we have learnt is to probably not get too distracted in the week, with reading this and that, and expecting this and that to happen.

“I guess, in terms of our psyche, we want to give them something that they are not going to expect.

"We want to go there and spoil the party a little bit, and we have got different tactics, different ideas about how we are going to do that, but fundamentally what we have got to focus on is putting an 80-minute performance together that we are proud of.

“In parts we have been brilliant in this Six Nations, but there have also been parts that aren’t good enough, so [we are] trying to put that together and hopefully we will do that.”