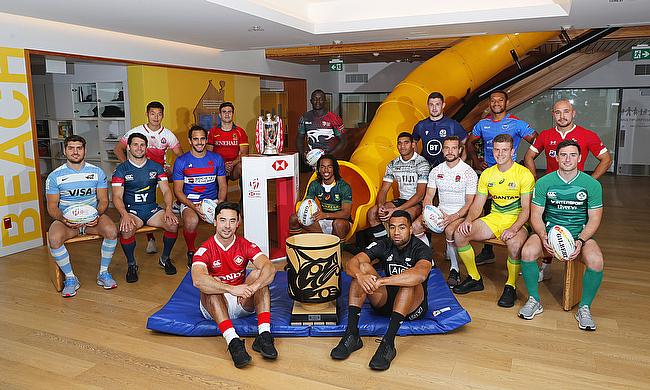 After the LA Sevens last weekend, Joe Harvey has caught up with World Series commentator, Dallen Stanford, ahead of the second North American leg of the World Series in Vancouver.

It was a particularly special for weekend for Stanford as the former USA Sevens captain resides in California, with the South African saying that is was a privilege to welcome the World Series into the state that he calls home.

“It was such a pleasure having my second home tournament of the season in Los Angeles, after Cape Town where I spent the first 25 years of my life,” Stanford said, “It was also nice not having to jump on a 30 hour flight to get to a tournament, but a 30 minute drive instead! I do hope Los Angeles grows year on year to become one of the busier stops on the Series.”

Pool A is topped by the winners of LA, South Africa. Having to not only beat Fiji, but overcome their superb attacking flair and dominant first half performance, their win in LA has easily been one of the standout moments this season, with Stanford hugely impressed by what he saw last weekend.

“The Blitzboks showed unbelievable character and mental strength on both days of the tournament,” Standford said, “In their pool match against Ireland, time had elapsed with them trailing 19-12, but they did not panic and kicked for the corner through a penalty. They won the subsequent set piece and scored a brilliant try to tie the game.

“They then went one step further in one of the most remarkable finals I have ever witnessed. They were down by 12 points with 30seconds left on the clock. Branco du Preez was unbelievable. First, to come off the bench and kick a winning restart, then get over the try line, followed by a very difficult conversion to send the match into extra time and sudden death. It was mental.”

South Africa are joined by the injury hit England, who despite having so many of their big names unavailable, still managed a fifth place finish in the US. Making up the rest of the pool are Argentina, who have been somewhat underwhelming at times this season and a Japan side who won the second leg of the World Challenger Series two weeks ago.

Headed by the runners-up from Los Angeles, Fiji were quite simply unlucky against South Africa last weekend. Not many in the side can be found individually accountable for their late collapse, with only a great team performance the reason for their runners-up spot.

Hosts of this week’s leg of the Series, Canada, are the third seed in this pool. Usually fairing well on home soil, Stanford believes it is a realistic aim for this team to pull of a surprise at BC Place.

“Canada find themselves in a very difficult pool with the flamboyant Fiji and a French team that could scorch you,” Stanford said, “That said, I could see them pulling off a quarter-final surprise at home, with a jam-packed BC Place backing them. They did defeat Fiji there last year.”

As Stanford eluded to, Canada and Fiji are joined by a France team, whose early form has deserted them somewhat in the last three legs of the Series, they still pose a real threat to any side they come up against. The final team in this pool are Wales who have had a recent improvement in their form, but still struggle at the foot of the table.

After their fairly dire showing in Sydney, New Zealand improved considerably last time out, finishing third overall in LA, now heading up Pool C in Vancouver. Always one of the most consistent and threatening teams every year on the Series, Stanford says that it will not be an easy road to a third series win this season for the men in black.

“The All Black 7s have a well-balanced squad and will be a threat in each of the remaining events,” Stanford said, “I think we’re in for a fantastic finish between them, South Africa and Fiji. My prediction is that New Zealand will meet the Blitzboks and the USA will take on Fiji in the Vancouver semi-finals.

“We’ve seen four different winners in Canada over the past four years, with New Zealand, England, Fiji and South Africa. What’s very impressive is that the Blitzboks have played in all three of the four finals.”

New Zealand are joined by an Ireland, who enjoyed their joint-second highest finish on the Series this year in sixth, a Spain side who impressed many on the West Coast last weekend and Kenya.

Headed up by an Australia team that lost the bronze medal match last weekend, Pool D has the hosts of last weekend’s leg of the Series as the second seed in this grouping of teams. The USA finished eight overall in their own backyard, with Stanford believing that Mike Friday’s side’s will feel that their finish last weekend is not a good barometer of where the side is.

“The US were superb in the quarter-finals against South Africa, leading 10-5 with only a minute remaining,” Stanford said, “The Blitzboks broke the home fans’ hearts, scoring a try near the death to win 12-10.

“Meanwhile, South Africa shut New Zealand out 17-10 in the semi-finals, showing just how close the Eagles were to knocking out the eventual champions of LA.”

Samoa and Scotland make up the final two spots of Pool D in Vancouver. Samoa had an extremely good start to this season and have fallen off dramatically in the past couple of legs of the series. In comparison, Scotland have struggled all year, with their best performances often coming in London and Paris.