World Rugby U20 Championship XV of the Tournament 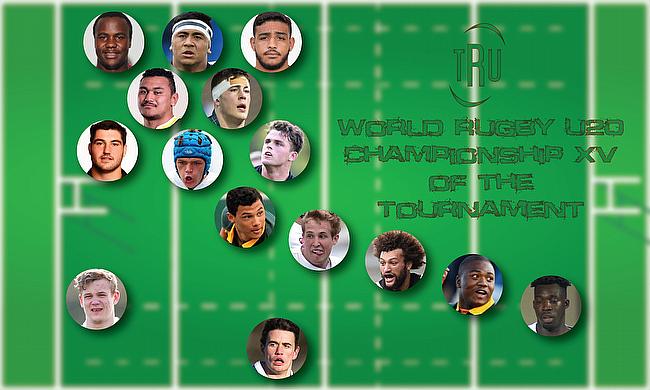 Another year, another fine showcasing of the best young rugby talent the world has to offer.

The 2017 World Rugby U20 Championship is in the books and it was another stellar tournament for the “Big Three” of age-grade rugby.

New Zealand regained the title in style from England, who, missing 14 players, were running on fumes come the final, whilst South Africa booked their place as a top seed for 2018, beating France in the 3rd/4th playoff.

As you would expect, those three nations dominate our XV of the tournament and their fans have every reason to be excited about the players set to join the senior player pool.

15. Will Jordan, Tasman and New Zealand

This silkily skilful full-back has everything you would expect from a Kiwi back three player and counter-attacks with ruthless precision, as well as being more than capable of dominating the territorial kicking battle. He is a future All Black and should be greedily coveted by any of New Zealand’s Super Rugby franchises.

Arguably an even better outside centre than he is a wing, Ibitoye shone on the outside for England, with incumbent Joe Cokanasiga called up by the senior side this summer. His nimble footwork, turn of pace, natural finishing ability and surprising ability in the air for a shorter player all caught the eye in Georgia and Harlequins will be keen to find him a place in their back line over the coming years.

This powerful centre had a very impressive tournament, showcasing both his ability to carry hard and straight at defences, as well as a nice array of running lines and the incision to make the most of any space afforded him by would-be tacklers. His defensive positioning wasn’t always the best, but his raw potential is something that should have Springbok fans salivating.

A former Samoa U20 representative, Leger shone with the Baby Blacks in Georgia, combining the playmaking instincts of Tiaan Falcon inside him and the dangerous running of Braydon Ennor on his outside. He targeted opposition fly-halves throughout the tournament and enjoyed plenty of success as a result.

Graham was pivotal to Scotland’s highest ever finish of fifth at the tournament and his four tries were often the difference in a number of tight, one-score contests that Scotland emerged victorious from. The Edinburgh man’s footwork and ability to move through the gears is reminiscent of Jason Robinson, albeit with Graham not yet quite as powerfully built as the World Cup-winning dynamo.

This could have easily gone to Romain Ntamack, who looked on the cusp of doing something special with France before injury curtailed his tournament at the end of the pool stage. Malins couldn’t quite add a second championship to his trophy cabinet but he was consistently excellent for England in the tournament, playing all five games in just 19 days, and even with injuries all around him, he continued to play with chemistry with the players plugged into the back line.

Papier was certainly one of the more eye-catching South African players at the tournament and not just because of dynamic, individual plays. Like his clubmate Rudy Paige, Papier has the full array of scrum-half attributes, capable of influencing the game with his passing, his running and his tactical kicking. Some of the best moments of the tournament for the South African team were only possible because of the tempo Papier instilled.

There has been no shortage of talented looseheads emerging from the South Africa U20 team in recent years, with Steven Kitshoff, Thomas du Toit and Ox Nche chief among them, and there has been no let off in that production line this year, with Blose looking like the real deal at the set-piece. He also flashed with his ability in the loose and could find himself in competition with his three predecessors for the mantle of Tendai Mtawarira’s successor, sooner rather than later.

A hat-trick in the final was a fitting reward for a fine tournament from Aumua, with pundits and fans alike already hailing him as the heir apparent to Dane Coles in the heart of the All Blacks’ front row. The almost vicious level of physicality he brought to the position was too much for age-grade teams to deal with and if he can tighten up the set-piece facets of his game, he is going to take senior rugby by storm in the coming years.

If South Africa have developed a trend for producing gifted looseheads, then France have just the same proclivity at tighthead. This powerful prop was the cornerstone of an equally-destructive French scrum and with his club nestled comfortably in the mid-table of the ultra-competitive Pro D2, he could quickly find himself at the centre of interest from some of the biggest sides in the Top 14.

Another Kiwi player who was physically superior to most at the tournament, Walker-Leawere made the most of that dominance and proved himself to be one of the most prodigious carrying threats out in Georgia. If it were not for a congested All Blacks engine room ahead of him, Walker-Leawere would be a candidate for a full Test cap in the next few years.

Just like Graham, Hunter-Hill was ever-present in Scotland’s record finish at the tournament and his impact as captain just further marked him out as a player to watch. He contributed enormously to the Scottish set-piece and showed his power in the loose, both with ball-in-hand and as a defender. A strong preseason and Hunter-Hill can push his case to be a foundation piece in Richard Cockerill’s vision for Edinburgh.

A beautifully well-rounded back rower, there is no real weakness to Jacobson’s game. The Baby Blacks’ captain had a fine campaign and led his side excellently, who seemed to grow and improve with each passing game. There is a little bit of Kieran Read about this young flanker, but he also has the work rate of a Sam Cane-type in the tight. He is certainly one to keep an eye on.

When everything was going wrong for England in the final, Earl was one player to stand up and put England on his back, going stride-for-stride with the brutal physicality of New Zealand. Like Jacobson, he had a fine tournament and showcased a skill set which boasts no weaknesses. Saracens have produced very talented opensides in Will Fraser and Matt Hankin and Earl is of the same mould, but they will be hoping he doesn’t have the same injury problems.

Mercer really needs no introduction or explanation for his inclusion. He was a man apart in the U20 Six Nations and barring the final loss to New Zealand, the same was true in Georgia. The work rate, ability to break tackles, lineout impact, leadership skills, it’s all there. He needs to fill out a little more before he’s ready for Test rugby, but he should feature prominently for Bath next season and take another step forward in his development.