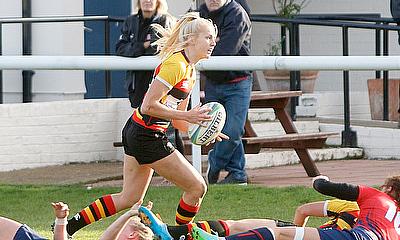 Week nine got underway with a common feature of the Women’s Premiership this season, a Richmond victory. Making it nine in a row, the league leaders saw off a second-half fightback from Bristol to win 31-22.

Leading by 14 points at half-time it looked unlikely that Richmond’s win would ever be in doubt, with their free scoring this season making them glaring favourites for a flurry of second-half tries.

But Bristol are made of sterner stuff and despite conceding an early second half try, rallied and got back in contention. An unconverted try saw them get the match to 26-10 with a flurry of their own getting the scores to 31-22. It could even have got better for Bristol, as they had chances in the last five minutes. But handling errors saw them surrender possession, with Richmond desperate to get the ball into touch and record yet another win.

Running in nine tries, Lichfield were always in control of the encounter, with a Holly Aitchison hat-trick within the first 24 minutes setting the tone for the afternoon. Five tries saw them earn the bonus point before half-time and some excellent kicking saw four conversions power them 33-5 in front.

The second half was just as dominant and despite keeping them out for almost 20 minutes, four more tries were scored, as another three conversions saw Lichfield claim their fourth successive league win.

Just four weeks ago it looked as though Lichfield were in a group on their own, seemingly too far off the play-off spots to realistically be involved but nowhere near the basement battle. Two straight wins then saw them gain some ground on Worcester and Bristol, as they faced the top sides. At this point there was still work to do, as at least one victory over their two rivals was necessary.

Two weeks later, Lichfield have taught them both a lesson and their impressive run has seen them rise from the wilderness in fifth to being in with a real chance. Sitting in third place they now have a six point cushion over Worcester in fifth with Bristol, who were on a great run of their own after seven games, falling to fourth place.

Lichfield host Saracens next weekend and in their current form, the league may see one its biggest shocks to date.

Elsewhere, Aylesford picked up their first win of the season on Sunday, as they ran out 24-22 winners over a depleted DMP Sharks side.

With players away on England duty, the conditions were more suited to the experienced squad of Aylesford and they made this count, leading the game 10-5 at half-time.

A win had been coming for the home side, after running a few teams close this season and some second half resilience saw them leave with the points. DMP took the lead almost instantly after the restart but two converted tries from the Bulls saw them once more recapture the lead.

With the scores at 24-17, a last minute try from DMP looked to have produced the first draw of the season, only for the Sharks to miss the conversion and hand a win to their opponents.

The losing bonus point for the Sharks should be enough to avoid finishing bottom, as the win for Aylesford still leaves them five points adrift of seventh. They do though finally have something to show for their efforts this season.

In the final encounter of the weekend, a scrappy battle at Allianz Park saw Saracens shut out Wasps with a 22-0 victory.

The afternoon may have turned out differently had an early Wasps penalty not come back off the posts but even a fragmented match couldn’t stop Saracens from claiming the points.

They found themselves 12-0 up at the break in a half that was dominated by scrums. Handling an issue for the home side after good Wasps pressure forced them into mistakes. It meant that they couldn’t build any consistent pressure, as territory would be gained and surrendered time after time for knock-ons.

The second half too had a real bruising feel, with tough tackles making it a real central battle, the ball spending a vast amount of time around the halfway line. But Saracens never looked threatened and when they got it right, they were devastating, notching up two more tries to win a tough encounter 22-0, with the scoreline not reflecting the hard-fought nature of the tie.

Despite the win, they now sit five points behind Richmond at the top of the league whilst a loss for DMP Sharks means Wasps remain in sixth place.