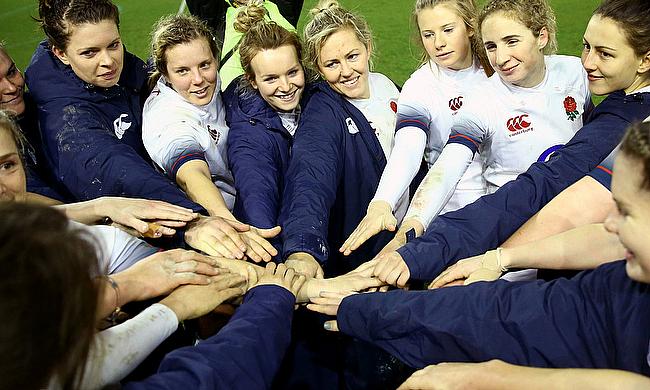 England and France remained unbeaten while Ireland registered their maiden win in the recently concluded Round 2 fixtures of Women's Six Nations Championship.

Poppy Cleall and Ellie Kildunne scored doubles as England Women went on to blank Wales Women 52-0 in the encounter between the two teams held at Twickenham Stoop on Saturday. Cleall scored the opening try in the eighth minute while Katy McLean improved it as the home side had an early 7-0 lead. Things only got better for the red rose from there as Abigail Dow (17'), Leanne Riley (21'), Kildunne (30') scored first-half tries as they amassed 26 points.

As the visitors failed to make any impact in the second half as well, England just dominated the proceedings with Marlie Packer (46'), Rachael Burford (60'), Cleall (70') and Kildunne (79') scoring tries while McLean kicked three extras to complete a 52-0 win.

Standings: England continue to top the table while Wales slip to the fourth position.

Scotland suffered an early setback even before kick-off as Sarah Bonar was withdrawn due to injury with Siobhan McMillan drafted in. Sarah Law gave some advantage to Scotland with an early penalty but France responded back with tries from Agathe Sochat and Cyrielle Banet while Jessy Tremouliere got the conversion right on the second attempt as they ended the first half with a 3-12 lead.

The third try for France came through Caroline Boujard while Jade Le Pesq touchdown at the end of the game sealed the bonus point for France as they completed a 3-26 win.

Standings: France with two wins from as many games are at second position in the table while Scotland move to fifth.

Ireland bounced back from their defeat to France in the opening round with a 21-8 triumph over Italy. Megan Williams scored the opening points in the game with a 10th minute try while Niamh Briggs slotted the conversion.Just at the stroke of half-time, Italy managed to get off the mark with a penalty from Michela Sillari as they reduced the arrears to four points leading into the second half.

Ireland stepped up the ante in the second half with Ciara Griffin scoring back to back tries in the 67th and 74th minutes following a double conversion from Briggs as they increased their tally to 21 points. Eleonora Ricci scored a consolation try for Italy in the final minute but Italy went on to lose the encounter by 13 points.

Standings: Ireland move to the third place with the win while Italy continue to languish at the bottom.