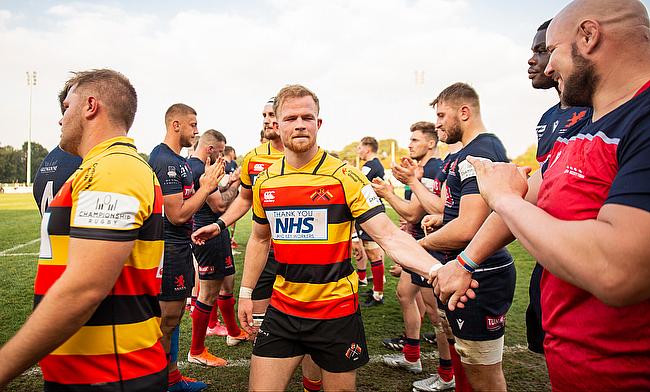 This time last year, Will Homer was battling it out with Gareth Davies, Kieran Hardy and Dane Blacker for the starting scrum-half spot at the Parc y Scarlets.

Back with a top tier domestic side after two seasons spent on the Channel Islands with Jersey Reds, Homer is again plying his trade back in the English second division, this time with Richmond in West London.

His time in red, yellow and black has started in fine fashion too, the club currently sitting in third place in the Championship after four games played. Most recently, Steve Hill’s side beat their closest rivals – in that they share a stadium – London Scottish 43-21.

Digging deep in order to overcome a 10-14 deficit at the break, Homer scored two tries on the way to victory. Usually deployed at scrum-half up to this point of his career, following conversations with coaches whilst at Scarlets and Jersey, the 26-year-old is now covering the back three and thriving.

Beyond the field, Homer is enjoying life too, having moved into the working world after his time in Wales came to its end. It was this desire to work a nine to five and to still play a high standard of rugby that made Richmond the perfect landing spot for the former Bath man.

“To be honest with you, I was at a bit of a crossroads when I finished with Scarlets,” Homer said. “I wasn’t really sure what I wanted my next steps to be. I wasn’t sure if I wanted to carry on playing full-time after Covid and everything going on, with Wales being particularly strict while I was with Scarlets.

“I wasn’t quite sure where I wanted to go forwards. I took a bit of a break away from it all and decided that I wanted to make the leap into the real world and Richmond are very accommodating of that. I didn’t want rugby to be the focal point of my life at the minute, I wanted to balance myself out a little bit and regain my social life.”

During his time in Wales, the country was subjected to a stricter Covid-19 protocols than the rest of the United Kingdom. Like so many other, Homer was attracted to the game for more than just putting your body on the line for 80 minutes.

On top of the physical exploits, the social side of the game is a big appeal to the back and given how off-field interactions were limited, that was another contributing factor to the move to part-time rugby.

“If I am being completely honest with you, I was not enjoying rugby as I used to and sort of fell out of love with the game,” Homer explained.

“That had nothing to do with Scarlets as a club, but with everything that was going on, and I had made the jump back up to a top league after being in the Championship, and I didn’t really play that much and felt like I didn’t really get the reward for the sacrifice I was making to be there.

“Ultimately, my decision came down to wanting to enjoy myself again and wanting to enjoy the game that I always enjoyed growing up. I just fell out of love with it a bit, so I just weighed up my options and thought that by playing part-time, it was less of a focal point.

“If I have a bad game or a bad training session, I don’t carry it around with me; I have got a job to do on Monday. The first couple of weeks it knocked me for six, but everyone else was managing to do it, so I just asked some questions, and everyone said to stick with it, I’d get used to it and that’s the case.

“Rugby has become something I do again for enjoyment. Just having crowds back again, I can’t explain how good that it. Last year I would finish a game, there would be no one there, you would go inside, get changed and go home. You couldn’t go out for beers or anything.

“Already I have had my family, all my mates have come and watched me, and for me that is the biggest difference. It just makes everything enjoyable and worthwhile again.”

Across the course of his career so far, Homer has lived and breathed rugby. From the moment he has woken up, to the time he has fallen asleep, hit time has been spent fine tuning his skills, spending time in the gym and analysing opposition.

Now, he works as a recruitment consultant in central London, heading to training on Tuesday and Thursday evenings and playing at the weekend. Having now found that balance, Homer is helping Richmond compete in the Championship following a truncated 2020/21 season that saw the club finish at the bottom of the pile.

Sitting in the top three as things stand, Richmond have won two and lost two. Remaining competitive in their losses against Cornish Pirates and Coventry, one thing that the former England U18 international believes is to the aid of his side is the depth that the club has.

With seven senior men’s sides, as well as thriving women’s, youth and minis programmes, there is so much to Richmond than just a senior men’s team operating in the second tier, that availability of players much to the benefit of he and his teammates.

“There are lads here playing in the seconds and thirds who have played 50 times in the Championship, so there is strong competition there,” Homer said. Like I mentioned earlier, when I played against part-time sides, you never quite appreciated what they actually have to do to get themselves ready for Saturday.

“We are probably not going to match them (full-time sides) physically, and Powelly (Rob Powell) and Steve (Hill) have given us a game plan that everyone has bought into. We want to play expansive rugby, we want to keep the ball alive, we want to play with width because that suits our strengths better.

“If we try and go toe to toe with some of the teams that are full-time and have got a lot more weight behind them, that is when we suffer. I didn’t see a lot of our play from last year, but from what I understand we are playing a lot more to our strengths this year.”

With just two points separating the top-placed Ealing Trailfinders from Cornish Pirates in tenth, many fears of the league being uncompetitive with more sides than ever being part-time have been put to bed for now. 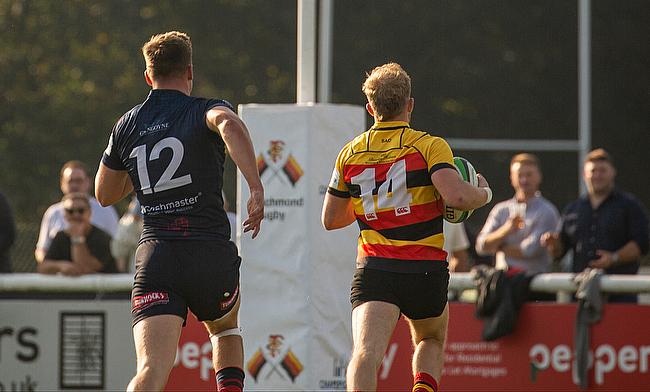 This is something not lost on the players either. Just several games into the season, there is a building excitement, especially with Ealing having lost the other weekend in Cornwall.

“It’s crazy, isn’t it?” Homer said. “You can lose one game and go from second to eleventh, which is ridiculous. I think it just shows that the Championship is an interesting league.

“It is a cliché, but whoever turns up on the day is going to win, it is that close. I thought Ealing were going to pump everyone by 50 points, and they lost last weekend, so it is very unpredictable which makes it a very exciting league to be a part of.

“Every game counts and you could find yourself going from top to bottom very quickly.”

Currently, the whole league is on a rest week, the competition poised finely at this stage. Next time out, Homer and his teammates will be taking on a Bedford Blues side that stunned their Bedfordshire rivals 53-34 at Dillingham Park last time out.