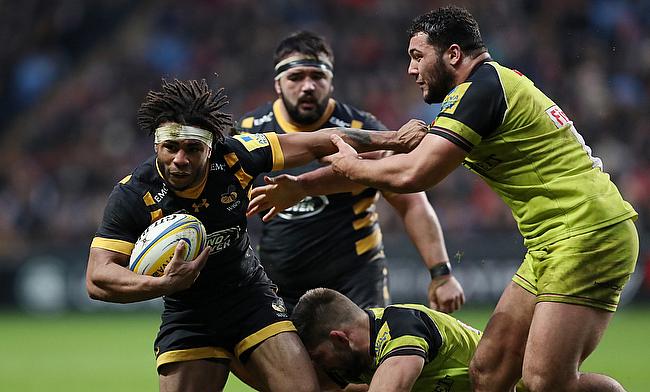 Wasps ran a six-try riot despite a red-card to Kyle Eastmond as they completed a 22-44 win over Harlequins in their Aviva Premiership encounter at Twickenham Stoop on Sunday.

The win has taken Wasps to the third position in the table while Harlequins slip to the ninth place.

Wasps got off to a promising start with Juan de Jongh and Thomas Young scoring tries in the 4th and 10th minutes respectively with Danny Cipriani kicking a conversion on the first occasion.

Harlequins, who got their first points in the ninth minute through a penalty from Marcus Smith had the numerical advantage for most part of the game after Eastmond was red-carded in the 16th minute for swinging arm at the Quins' number 10.

The gap came down to just two points when Tim Visser scored the opening try for Harlequins in the 24th minute that was improved by Smith but despite being down to 14-men, Wasps showed a lot of resilience and Cipriani's 28th minute penalty meant the scoreline was 10-15 in favour of Dai Young's side at half time.

Nevertheless, Harlequins went on to level the score when Aaron Morris crashed past the line at the start of the second half but Wasps had other plans as they upped the ante in the remainder of the game despite having one man short.

Young and Willie le Roux scored back to back tries in the 49th and 51st minute while Cipriani kicked the extras and a penalty to provide a breathing space of the visitors as they stretched their lead to 17 points.

Both teams were down to 14 men in the 62nd minute when Archie White was sin-binned for the home side as Tom Cruse (63') and Josh Bassett (75') scored further tries for Wasps to take their tally to 44 points. The Quins came close to achieving the bonus point following Charlie Matthews' 70th minute touchdown but failed to give the final push in the last 10 minutes.