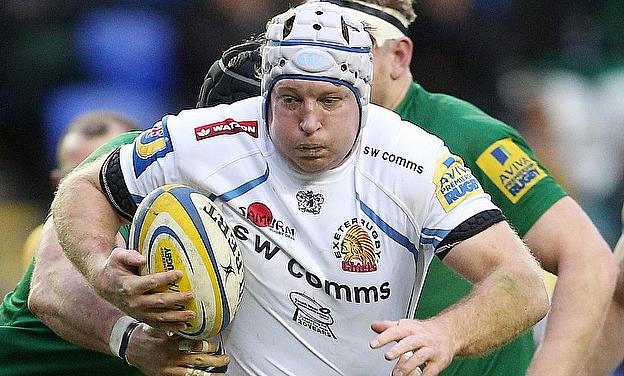 Chiefs take the fight to Saints
Slade, the answer to England's worries at 12
Atkins signs for Chiefs
Slade guides Exeter to victory

Two tries from Thomas Waldrom gave Exeter a 24-20 victory over Saracens at Allianz Park to keep alive their hopes of securing an Aviva Premiership play-off spot.

Waldrom's tries - his 15th and 16th in the league this season - cemented his position as the league top try-scorer.

Exeter's win allowed them to join Saracens on 63 points in the table with next week's final fixtures seeing the Chiefs at home to Sale while Saracens visit London Welsh.

Leicester, who are one point ahead on 64, face a difficult home encounter with close rivals Northampton as the three teams fight it out for just two spots.

Luke Cowan-Dickie was Exeter's other try-scorer with Gareth Steenson converting all three and kicking a penalty.

Saracens scored two tries through Chris Ashton and Chris Wyles with Hodgson converting both. Owen Farrell and Hodgson each kicked a penalty.

The game itself was a compelling encounter. Saracens displayed the greater flair with Exeter having to work far harder for their points with the driving work of their forwards from close range ultimately being the deciding factor.

Billy Vunipola and Brad Barritt were absent from the Saracens line-up because of slight injuries. George Kruis made his 100th appearance for the club with scrum-half Richard Wigglesworth captaining the side.

Exeter recalled Steenson at fly-half with Henry Slade switching to centre in place of the rested Jack Nowell. Flanker Ben White returned from injury with Cowan-Dickie back as hooker.

Exeter exerted early pressure and should have taken the lead but Steenson missed an easy drop-goal attempt. However the outside half soon made amends by kicking a penalty to give his side a sixth-minute lead.

The visitors looked the sharper side in the opening period but, against the run of play, Saracens scored the opener.

Mako Vunipola and Jamie George made dents in the Chiefs' defence, allowing Marcelo Bosch to send Ashton in under the posts.

Back came Exeter to regain the lead when Cowan-Dickie drove over from close range for the try which Steenson converted to give the visitors a 10-7 lead at the end of the first quarter.

Saracens were not behind for long, scoring a splendid second try.

The hosts moved the ball along the three-quarter line for Wyles to give David Strettle a sniff of an opening. The wing ran strongly before feeding the ball back inside to Wyles, who ran 30 metres to score.

Saracens appeared to be taking control of the match but the topsy-turvy nature of the game continued when Exeter broke out to score.

The home side lost a line-out in their own 22 and Cowan-Dickie capitalised by driving into the heart of the opposition defence and, with momentum maintained, Waldrom crashed over the try-line.

Steenson converted but a penalty from Hodgson with the last kick of the half made it 17-17 at the interval.

With 30 minutes remaining, Farrell was introduced in place of Hodgson and it was his penalty that was the first score of the second half.

Farrell had another chance but his long-distance effort went narrowly wide so Saracens held just a three-point lead going into the final quarter.

The tempo of the match had subsided considerably as both teams appreciated the importance of the result. Kicking for territory became tantamount with both scrum-halves booting the ball at almost every opportunity.

With 10 minutes to go, Saracens were penalised at a scrum on the halfway line to allow Steenson to secure a platform in the home 22.

Exeter relied on the driving strength of their pack and Waldrom crashed over for the crucial try, which Steenson converted.

Saracens rallied to produce seven minutes of severe pressure on the Exeter line but a couple of elementary mistakes allowed the Chiefs to hang on.