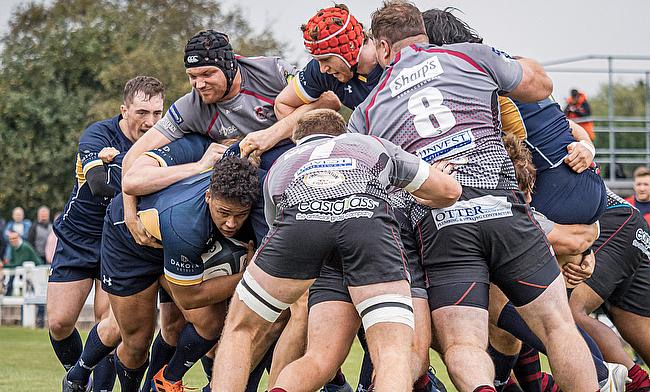 National League Rugby continues this weekend and there are already some intriguing matchups taking place even at this early stage.

Before we dive into Round Two’s action, Saturday’s National Two South fixture between Henley Hawks and Hinckley has been postponed as a mark of respect following the tragic loss of David Hyde.

Once again, our thoughts are with David’s family, friends and everyone associated with Henley at this difficult time.

A statement on Henley’s website read: “As a club, we have been overwhelmed by the messages of support and goodwill from the rugby community, in which Dave was such a well-known and popular figure. We send our heartfelt gratitude to everyone who has taken the time to contact us.

"As a mark of respect, the Hawks game at home against Hinckley this Saturday has been postponed. We would like to thank Hinckley for their understanding."

Henley have also set up a GoFundMe page to help support David’s wife, Katherine and son, Tore. All the details are here.

Rosslyn Park sit top of National One having made an assured start to the season with a 37-8 victory over Plymouth Albion at Brickfields. Speaking to The National League Rugby Review Show after the game, Director of Rugby Kieran Power was delighted to come away from Devon with five points but after navigating their way past one tricky opponent, it doesn’t get much easier for Park in Round Two.

Their first league fixture back at The Rock since March 6th 2020 sees them welcome Leeds Tykes to the capital and Phil Davies’ charges will be eager to bounce back after their opening day defeat. The Yorkshire outfit lost 41-29 on their own patch against newly-promoted Taunton Titans, but Davies was upbeat by the enthusiasm of his young side and they will be hoping they can kickstart their National One campaign on Saturday.

Both clubs were tipped to be challenging for the title this season, so who can lay down an early marker?

A sensational try from @rosslynpark in #Nat1 ??

They put five past @AlbionRFC in a @Natleague_rugby Round 1 thriller at Brickfields ??

?? Missed the action? Subscribe to The National League Rugby Review Show for all the best moments ?? https://t.co/MUhqiSo953 pic.twitter.com/0XCnSt4JSP

The aforementioned Taunton are on the road once again this weekend, but they will head to Darlington Mowden Park in extremely high spirits. Despite being one of the newcomers to National One, Tony Yapp’s side displayed heaps of experience and notched 22 unanswered points to secure an opening day triumph against Leeds Tykes.

That winning feeling was so nearly something DMP tasted in Round One, but a late Morgan Tonks try for Birmingham Moseley snatched the victory away from Garry Law’s side. The North East outfit were 13 points ahead with 20 minutes remaining last weekend so they will be hoping they can give the Mowden faithful something to cheer about in their first home league game for over 18 months.

This week, one of The National League Rugby Review’s featured matches comes from the Midlands as Birmingham Moseley host Blackheath. As mentioned above, Adam Balding’s side produced a remarkable revival act to clinch an opening day win and that resilience would have pleased the Moseley boss even if they had to dig themselves out of a hole.

As for Blackheath, it was a tale of frustration on the weekend as their own ill-discipline and lack of sharpness saw them lose 18-15 against Cinderford at Well Hall. You could forgive Club for a bit of rustiness considering how long we have been without competitive rugby for - as well as their influx of new debutants - so James Shanahan and his side will be looking for a more clean-cut performance on their travels.

Elsewhere in National One this weekend, newly promoted Caldy get their campaign up and running away at Cinderford, Rams RFC host Tonbridge Juddians aiming for a second bonus-point win on the spin whilst Bishop’s Stortford take on Plymouth Albion and Cambridge go to Sale FC.

The National League Rugby Review Show’s key game of the week comes from newly-promoted Bournville as Mitch McGahan’s side entertain Harrogate. The hosts began their first-ever season in National Two North in the best possible manner with a 24-19 win away at Huddersfield and Bourns No.8 Callum Thompson was also named Player of the Week to cap off a fantastic start to life at this level for the Midlands club.

In terms of Harrogate, they arrive at Avery Fields following a 51-21 thrashing at the hands of Sedgley Park and it might well have given the Yorkshire side a reality check on their return to National Two North. David Doherty’s men will be hoping for more joy this weekend as they look to get off the mark in Birmingham.

Even though we are only entering Round Two, a clash between Sedgley Park and Rotherham Titans seems to have the aura of a heavyweight battle surrounding it given how both teams performed last Saturday.

National League Rugby may have only returned on Saturday but there is already a top of the table clash this weekend at Park Lane as @SedgleyTigers take on @RotherhamRugby KO is 2:30 Saturday. #supportyourlocalsportsteam pic.twitter.com/ybvvuQ9NhD

Sedge scored nine tries to brush Harrogate aside and earn maximum points whilst the Titans fought hard to clinch a well-deserved victory over Wharfedale at Clifton Lane. Rotherham head coach Steve Salvin stressed that his side cannot get too carried away after one fixture but if they were to go to Park Lane and secure a positive result, it could set the tone for the season ahead.

If Sedge’s meeting with Rotherham is a tasty looking tie, Fylde’s Round Two matchup with Loughborough Students may fall under the same bracket. The Lancashire club hit the ground running with a convincing 48-24 win over Tynedale on the opening day, something which would have delighted new joint head coaches Chris Briers and Alex Loney.

As for the Students, their Round One examination was slightly more strenuous but Loughborough came through a tricky assignment away at newly-promoted Blaydon. The 27-23 triumph puts them on the board immediately so both teams will be looking to make it two from two on Saturday.

The same can be said for Hull and Stourbridge who meet in the Midlands this weekend whilst Hull Ionians host Tynedale. Elsewhere, Sheffield Tigers face Wharfedale and Blaydon take on Huddersfield whilst Luctonians have postponed their fixture with Chester after positive Covid-19 cases in their camp.

After hammering Barnstaple 71-0 on the opening day, you would expect Clifton and Matt Salter to be elated ahead of their Round Two meeting with Leicester Lions and whilst they would have been pleased with their display last weekend, they are not resting on their laurels.

This week, Salter admitted that the Lions were the only side to physically dominate the Lavender and Blacks across both games in 2019/20’ and the Midlands club return to TMDP Park looking to bounce back from their 27-5 loss to Redruth last Saturday. Head coach Gareth Collins praised the Reds’ forwards play following the defeat, but maybe the Lions can look to their own pack to produce an immediate response.

Two teams who were tipped for strong seasons meet at Rugby Park this weekend as Worthing Raiders host Bury St Edmunds. The home side on Saturday kicked off the new campaign by securing all five points against Guernsey Raiders, which would have pleased the new management group at the Sussex-based club.

The Raiders will also be celebrating the club’s centenary this weekend so Bury St Edmunds will be out to spoil the party, especially after an excellent 30-22 opening day win over Canterbury. Like Worthing, the Wolfpack are under new leadership and Jacob Ford would have been delighted with the way his side performed last Saturday so who will make it back-to-back successes in Round Two?

The final featured game on this week’s National League Rugby Review Show comes from Bristol as Dings Crusaders welcome Esher to Shaftesbury Park. In terms of the Ees, they produced a very efficient performance in Round One to see off newly-promoted Rochford Hundred, but Peter Winterbottom will know sterner tests lie ahead for the men from Molesey Road.

Whilst it might have been a comfortable afternoon for Esher, the same can’t be said for Dings who dramatically snatched victory from the jaws of defeat against Westcliff last Saturday. Tom Hargan’s late score got the Crusaders off to a winning start so can they back it up this weekend?

Two other clubs who began on the front foot, Redruth and Barnes, meet in the capital in Round Two whilst Old Albanian host Canterbury, Westcliff travel to Barnstaple and newcomers Rochford Hundred and Guernsey look to hit back after opening day defeats.

Subscribe to the National League Rugby Review Show to catch all the weekend's action...