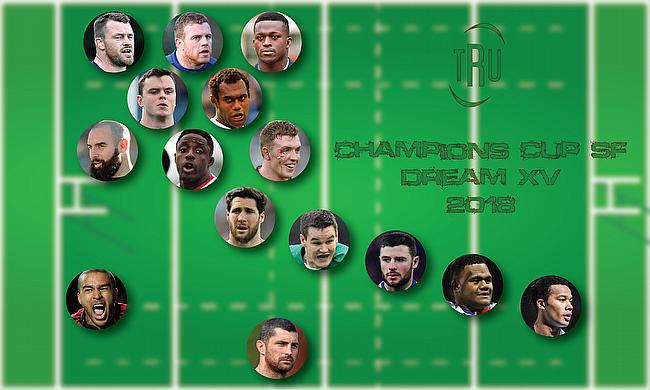 We pick out our standout performers from this year's European Champions Cup Semi Finals.

1. Cian Healy (Leinster) – It’s so good to see that Cian Healy is back to his barnstorming best after so may injury lay-offs. The loosehead offering Leinster both steadiness at the scrum and an explosive ball carrying option.

2. Sean Cronin (Leinster)  – If it weren’t for Rory Best, Sean Cronin would easily be Ireland’s starting hooker. A safe pair of hands when throwing the ball in at the lineout as well as a good ball carrier for Leinster, Cronin seamlessly makes his way around the park, covering a lot of ground.

3. Cedate Gomes Sa (Racing 92) - A destructive force at the scrum, Gomes Sa was nuisance for Munster at the set piece. The French international has really made strides this season. Good in the loose, the tighthead will be hoping to make an impact in Bilbao.

4. Leone Nakarawa (Racing 92) – Glasgow Warriors must be rueing the day that Racing 92 got in contact with Nakarawa to offer him a contract. Lock, Nakarawa, is one of the most phenomenal rugby players of his generation. The former Fiji sevens star was brilliant against Munster on Sunday.

5. James Ryan (Leinster) – Ryan is still yet to have lost a senior game of rugby. Not so long ago Maro Itoje was the lock everyone was talking about. Now, Ryan is the talk of the town. Ryan was one of the stand-out performers for Leinster against Scarlets, making effective carries and dominating at the lineout.

6. Scott Fardy (Leinster) – Fardy has brought a different dimension to Leinster. The former Wallaby has brought his offloading game to Leinster’s forward pack. Scoring a try at the weekend and contributing to each try with either a carry or at the breakdown.

7. Dan Leavy (Leinster) – Having been the player of the quarter-finals in the last round, Leavy wasn’t quite at the level of his last outing in the Champions Cup but was still better than most of his counter-parts. Carrying the ball well and always causing the Scarlets pack problems at the ruck.

8. Yannick Nyanga (Racing 92)  – The number eight caused many problems for Munster, breaking the line nearly every time that he got the ball. Munster didn’t know how to handle the 34-year-old who will be hoping for an international resurgence.

9. Maxime Machenaud (Racing 92) – Perhaps the second-best scrum-half in the northern hemisphere, Machenaud is a very reliable goal-kicker and metronome for any side he plays for. Undoubtedly relishing the prospect of Bilbao, it will be interesting to see the 9 in action.

10. Johnny Sexton (Leinster) – Nailing five conversions, one penalty and one try, Sexton was magnificent for Leinster at the weekend. Smartly evading the Scarlet’s defence to score his try, Sexton continues his resurgence following a couple of disappointing years.

11. Simon Zebo (Munster) – The only player from a losing side this weekend, Zebo changed Munster’s fortunes when he took to the pitch. He was quite simply electric as he was directly involved in two of Munter’s tries. Smartly scoring one himself and kicking through for Conway to score his try, Zebo deserves a place in this team of the round.

13. Virimi Vakatawa (Racing 92) – Operating fantastically as a link between the centres and the Racing 92 back three, Vakatawa is quickly finding his feet at outside centre. The former sevens player has struggled with injury over the last year or so and this change of position is playing dividends for his club rugby.

14. Teddy Thomas (Racing 92) – The Frenchman was on fire for Racing at the weekend. Linking up well with outside centre Vakatawa, Thomas could have had three tries if he hadn’t of gifted what would have been his third score to Machenaud. Thomas is really impressing as international selection draws closer.

15. Rob Kearney (Leinster)– Again, Kearney is coming good after a difficult time with injury. Having had his resurgence in the international side, the likes of Jordan Larmour and Mike Haley will be looking to dethrone Kearney for the Ireland 15 shirt. If Kearney were to keep performing like he is surely going to keep his place in the international set up. He played supremely well against Scarlets, especially in defence when the full attacking force of Scarlets was coming towards him.