Toulouse show power and experience against a persistent Saracens side 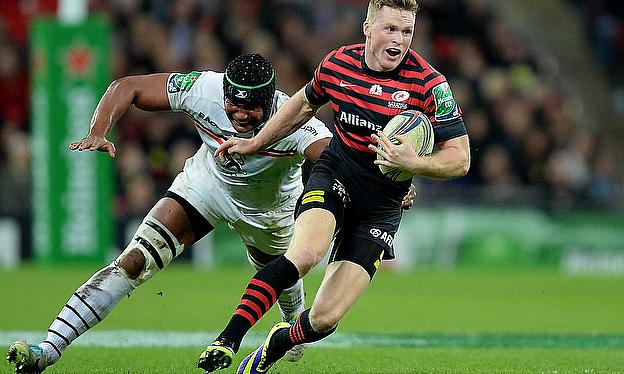 Saracens saw their hopes of topping Pool 3 in the Heineken Cup all but ended in south-west France as they were beaten 21-11 by Toulouse.

An early try from Chris Ashton and two penalties from Owen Farrell kept them in the hunt at the Stade Ernest Wallon but Toulouse will win the group unless they slip to a shock defeat at Zebre next week.

Sarries' scramble defence was outstanding in limiting Toulouse to seven Jean-Marc Doussain penalties but the French giants were far more threatening throughout as the likes of Hosea Gear and Yohan Huget cut loose at regular intervals.

Toulouse are guaranteed a place in the last eight but are still unsure of top spot in the pool, while Mark McCall's men will also be confident of joining them in the knockout stages when they host Connacht next week.

The opening points of the game came immediately after the kick-off as a huge chase from Toulouse forced Billy Vunipola to hang on to the ball, with Doussain slotting the penalty from 10 metres to the right.

But it was Sarries who were celebrating the first try after eight minutes as Ashton darted down the blindside when Toulouse were sloppy around the fringes and Gear got sucked in at a close-range ruck.

Farrell uncharacteristically sent the conversion across the face of the posts after Ashton had done well to race around 10 metres in from touch.

Doussain kicked a second penalty from straight in front after Sarries were caught with hands in the ruck after 14 minutes but superb scramble defence from the visitors prevented them falling further behind following a brilliant Toulouse break led by Huget and Maxime Medard .

Farrell kicked Sarries in front when Census Johnston was penalised at a 27th-minute scrum but the score swung back in Toulouse's favour straight after the kick-off as Doussain struck his third penalty to make it 9-8.

That single-point advantage soon became four when Doussain added another penalty in the 33rd minute but Saracens were fortunate not to have been further behind after a missed tackle from Ashton left them in all sorts of trouble.

The England wing handed his opposite number a free run down the left after being bumped off on halfway and Gear's clever step and offload to Chiliboy Ralepelle had Toulouse within five metres of the tryline.

Sarries scrambled superbly as the likes of Louis Picamoles, Yann David and Yohan Maestri all battered forwards, with Yannick Nyanga eventually held up over the line and skipper Thierry Dusautoir opting for the posts from the resulting penalty.

Sarries trailed 12-8 at the break and they could have been further adrift in the opening stages of the second half as Toulouse began brightly.

Saracens were again exemplary in defence, though, and a Doussain penalty on 50 minutes was Toulouse's only reward.

Doussain missed with a drop goal attempt seven minutes later as Sarries all but emptied their bench and he was off target from the tee on the hour.

Sarries' task got significantly tougher moments later, though, as Mako Vunipola saw yellow for a breakdown offence and Doussain's penalty made it 18-8.

Farrell brought Sarries back to within bonus point range with a quarter of an hour left but a seventh strike from Doussain robbed them of that consolation with three minutes remaining.