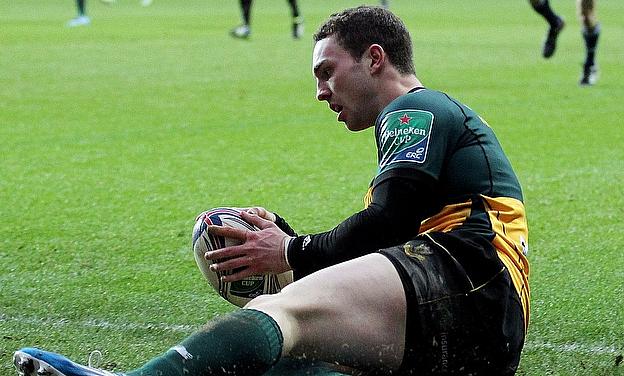 The juggernaut Wales international wing pounced two minutes after half-time, sprinting 70 metres to score when Saints snaffled turnover ball, and there was no way back for an Ospreys side outgunned up front.

Stephen Myler celebrated his call-up to England's RBS 6 Nations squad by kicking four penalties, while centre George Pisi and substitute Glenn Dickson claimed late touchdowns in the 29-17 success, but Pool One rivals Leinster's victory over Castres in France means they are set to top the group.

Northampton are still clinging to last-eight hopes, but realisticallly they will require a bonus-point triumph at home against Castres next Friday night and then have to rely on other results.

Saints' Liberty Stadium triumph - the eliminated Ospreys replied with Rhys Webb and Alun-Wyn Jones tries, plus a Dan Biggar penalty and two conversions - owed everything to their set-piece dominance.

But a crushing home loss to Leinster last month is set to prove the pivotal result in terms of Northampton's quarter-final ambitions.

Saints go into the final round of group fixtures four points behind Leinster, and with the Irish heavyweights having home advantage against the Ospreys it would be a major surprise if Brian O'Driscoll and company let things slip now.

The Ospreys made a late change, with their Wales international centre Ashley Beck sidelined by a calf muscle injury. Jonathan Spratt replaced him, and Ben John moved on to the bench.

Saints drew first blood through a second-minute Myler penalty, and he soon doubled that advantage as Ospreys struggled to impose themselves on a contest they needed to win or face guaranteed elimination one week inside the distance.

Biggar then booted a 16th-minute penalty that got the home side up and running, and there was plenty of needle up front as Saints skipper Dylan Hartley was warned for foul play before rivals props Aaron Jarvis and Alex Waller tangled after a scrum broke up.

The Ospreys enjoyed plenty of possession, but they found the Saints defence in brick-wall mode, and when Northampton's forwards surged upfield they gained another penalty that Myler duly landed.

It was effective, rather than spectacular, rugby by the visitors, yet it had the desired effect, with French referee Pascal Gauzere finally running out of patience and sin-binning Ospreys prop Ryan Bevington for a technical infringement.

Ospreys flanker Justin Tipuric infringed almost immediately through a late challenge on Saints full-back Tom Collins, and Myler maintained his 100 per cent record with a long-range strike that put Northampton 12-3 ahead.

The Ospreys needed some inspiration to get themselves back in the contest, and it almost arrived on the stroke of half-time when Tipuric sent wing Jeff Hassler over, but the try was disallowed after Gauzere consulted with television match official Gilles Cogne.

And it meant that Northampton were halfway to mission accomplished in west Wales, trooping off nine points clear, which accurately reflected their set-piece dominance.

Northampton turned the screw within two minutes of the restart, stealing Ospreys possession just outside their own 22 before Saints' former Ospreys scrum-half Kahn Fotuali'i found North and he finished in deadly fashion.

North was at it again just five minutes later, smashing a hole in Ospreys' midfield defence, but the home team managed to thwart any further danger.

The Ospreys finally breached Saints' defence through a close-range Webb try, converted by Biggar, yet Northampton remained in charge despite seeing lock Christian Day sin-binned for pulling down a maul.

Pisi's try - Ospreys wing Aisea Natoga was yellow-carded for high tackle during trhe build-up - put Northampton further ahead, and even though Jones gained a consolation score, Saints were not finished.

They stormed back upfield, and with the Ospreys defence at sixes and sevens, Dickson touched down for a try that he also converted, completing a flurry of late scoring.