The rebirth of Owen Farrell 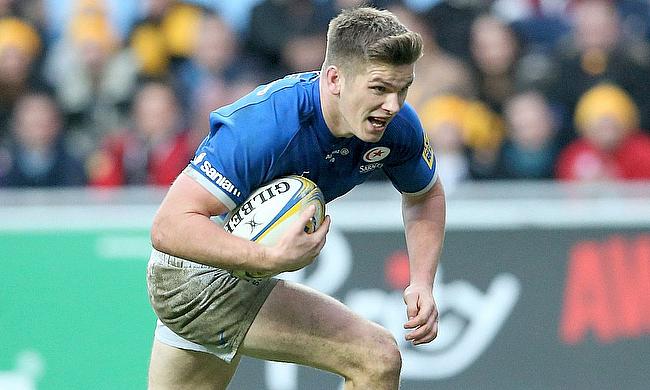 Conservative, petulant and a game-manager. Those were three of the more damning words used by Owen Farrell’s critics to describe him as a rugby player.

Those criticisms have dogged the young fly-half for years, but anyone who has watched his play closely over the last couple of seasons knows that they have long been redundant.

Yes, when Farrell first emerged, his game was built around his formidable defence and pinpoint kicking, and without the ability to unlock opposition defences on the gain-line, he was quickly given the tag of ‘game-manager’. Similarly, his passion for the game and determination to win did on occasion boil over and lead to acts which some would describe as petulance.

The truth is, he really wasn’t that different to any other talented young player emerging, but because he was so quickly thrown into the international spotlight, making his test debut at the age of 20, any flaws in his game or character were picked over with more gusto than a vulture finding a fresh kill on the Savannah.

The Farrell that stands at fly-half for Saracens now – and likely for England in the 2016 Six Nations – is a much different player than the one who made his international debut back in 2012. Now, aged 24, Farrell has 35 England caps to his name and, with no hyperbole, is fast maturing into one of the most effective and exciting fly-halves in the world.

The evolution of Farrell seemed to get a kickstart in 2013 when he played the role of Jonathan Sexton’s understudy on the British and Irish Lions tour to Australia and it has been gathering pace ever since. In the two full seasons since that tour, Farrell’s eagerness to attack and play on the gain-line has been noticeable and though it was still a learning curve for the young fly-half, the increase in his attacking ambition was clearly there to be seen.

Those growing pains now look long gone, as Farrell tears his way through the northern hemisphere’s elite, leading a high-powered and clinical Saracens side on their search for domestic and European honours. There’s no overthinking or hesitation in the fly-half’s game this year; he is playing with skill and freedom, assessing what is in front of him and invariably picking the right option.

With that experience and the nous that comes with it, Farrell also looks a far calmer man on the field. Sure, there are still incidents when he looks frustrated and angry with a decision, but that’s a mark of the aforementioned passion with which he plays the game. No one is claiming that he cuts the same cerebral figure of Jonny Wilkinson, stood in the pocket directing traffic with a calmness that defied the high-pressure scenarios he was often in, but those emotions give Farrell an edge to his game, one which many would argue England currently lack.

The comparison to Wilkinson has been a heavy one for Farrell to bear so far in his career. With his precise goal-kicking and high-intensity defence, it was an understandable one attributed to him early in his career, but it has made the boots he needs to fill unnecessarily large.

Wilkinson was a phenomenal player, but he also had at his back a pretty handy England side. For vast swathes of his career, Wilkinson enjoyed quick and clean ball, was often on the front foot, had a second kicking option outside him in Mike Catt and a cohesive back line which knew how to cut open opposition teams. For much of Farrell’s England career, he hasn’t had that same calibre of talent around him, making the comparisons between him and Wilkinson complimentary, but also quite unfavourable for the younger man.

Farrell is forging his own path, however, and not just following in Wilkinson’s footsteps. For all of Wilkinson’s many, many merits, he rarely, if ever, attacked the gain-line with the relish and effectiveness that Farrell is currently showing.

In the NFL, there is big leap expected from players when they go from their rookie year to their second one. Second year players often remark about how quick the games went in their rookie seasons, but when they suit up for their second campaign, everything slows down.

That’s how Farrell looks right now. Everyone else is going in slow motion and he is able to spot and exploit the gaps, whether that be running with the ball himself or putting another player in, and it’s now a rare sight to see the Saracens back line going anywhere but forwards.

Everything now points towards Farrell being able to stake his claim for the Eddie Jones’ England 10 jersey during the 2016 Six Nations. His development has come to fruition this season, George Ford is struggling for form and Henry Slade has broken his leg, cruelly ruling him out of the tournament.

Some people have always favoured Farrell, some have been in Ford’s camp. Some people will favour Ford regardless of his form and will even cling to those defunct criticisms of Farrell. What we have seen from the two players this season, however, is not open to subjectivity. Farrell has stolen a real march on his friend and rival over the last three months and has even caught Ford at his own game, and is currently the far more creative and instinctive fly-half.

Jones’ ability to pick from Farrell, Ford and Slade over the next cycle is enviable, but it shouldn’t come as any surprise when Farrell takes control of the jersey in 2016. The rough diamond has received quite the polishing over the last two seasons and is now shining brighter than ever.