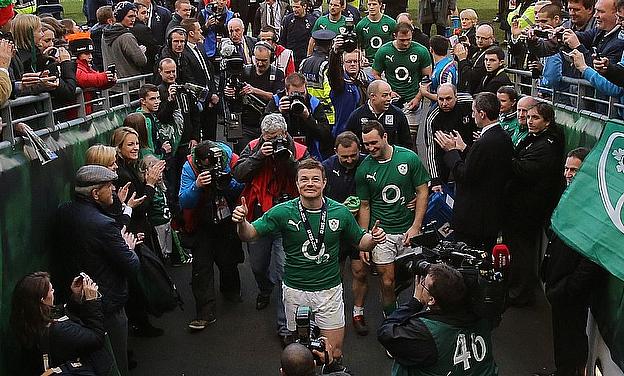 The 35-year-old marked his world-record 140th Test cap by deftly setting up tries for Johnny Sexton and Andrew Trimble, teeing Ireland up for a Six Nations title-decider against France next weekend.

Ireland's tournament points difference now sits at 81, with England the closest at 21, ahead of their Sunday clash with Wales.

Four teams went into the weekend with the opportunity to claim the Six Nations crown: Ireland and O'Driscoll perhaps left Dublin in pole position for the 2014 title.

Chants of 'one more year' rang around the ground at the final whistle, but O'Driscoll's summer retirement is not in doubt.

The legs may no longer be willing, but the brain remains tack-sharp.

Classic misdirection has long been the magic of this record-breaking man, and so it proved once again as he treated his adoring crowd to one final delve into his repertoire.

On his world-record 140th Test cap, O'Driscoll set a new Six Nations appearance record of 64 - and played a pivotal role in Ireland's crushing victory over the limited Azzurri.

Ireland spent 20 phases huffing and puffing around the fringes from the off, only to stroll through the door straight from a centre-field scrum.

O'Driscoll's shallow run to the gain-line and his blind pass invited Sexton into the run-around, and the gleeful fly-half ghosted through the gap and under the posts.

Italy were neither overawed nor overwhelmed though, immediately forcing themselves onto the front foot as if to prove their very purpose.

A huge chunk of fortune, a slice off O'Driscoll's boot in fact, gifted the visitors equal terms, however.

Trimble's thunderous midfield tackle dislodged the ball, O'Driscoll tried to boot in behind the defence, only to flick possession straight to Sarto.

Italy's left wing raced down his flank, wrong-footing first Rob then Dave Kearney, and cantered under the posts.

Schmidt's men kept their cool, though, and further pressure eventually told when Sexton slotted a penalty to reclaim the lead.

Eoin Reddan, on in place of the unwell Conor Murray, scampered close to Italy's whitewash with a sharp scrum-base break.

Ireland's control was not restored until Ulster wing Trimble jinked over in the left corner, just ahead of half-time, however.

Again it was master schemer O'Driscoll with the telling act.

Italy scrum-half Tito Tebaldi was penalised for throttling Ireland captain Paul O'Connell off the ball after the restart.

Sexton rejected a shot at goal to punt the penalty to the corner for an attacking line-out.

Ireland set the maul from the line-out, only for Italy to blunt the drive and clear to touch.

The Irish pack came again from another well-worked maul, though.

The home side's blood well and truly up, Devin Toner ploughed into the Italy 22, only to spill the ball in the tackle.

O'Driscoll powered through the line from Sexton's inside ball, but could not find a team-mate to continue the move.

Sexton then grabbed his second and Ireland's fourth try, taking the scoring pass from Dave Kearney after O'Driscoll's crucial pass over the top of the defence.

O'Driscoll then left the field to complete rapture as the Aviva Stadium rose as one to proclaim the Dublin departure of their favourite son.

The Leinster pivot acknowledged the acclaim en route to the bench, safe in the knowledge he had just produced his performance of the tournament on his home-turf farewell.

And when Paddy Jackson replaced Sexton to boot, it was clear head coach Schmidt had withdrawn his chief attacking agitators with Paris firmly in mind.

Evergreen centre D'Arcy stepped deep into the Italy 22, Chris Henry ploughed on, only to lose the ball - but Ireland quickly pilfered possession back.

Reddan whipped the ball blind at pace, and hooker Cronin bundled over for his first international score.

McFadden then bisected the defence for Ireland's sixth score, as the hosts cranked up their vital points-difference dominance in the Six Nations table standings.

Replacement prop McGrath bolstered those figures further, with the seventh and final try on the stroke of full-time.

The life of Brian, for Ireland in Dublin at least, drew to a glorious close.

That happy-ever-after dream is still alive.