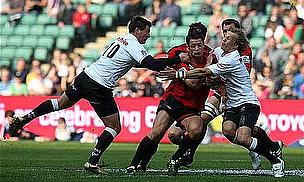 Crusaders will be in action against the Blues
©PA

Super Rugby Round 18  Guide: Debate from Scott Donaldson and the TRU team on whether it's Form or Class

Super Rugby is back and it seems like a distant memory since Round 16 finished.  The excitement of seeing England, France, Scotland and Wales take the international field have long gone. The northern hemisphere teams have headed home for their summer breaks.

There were only two upsets in Super Rugby Round 17 and only two bonus points for teams being within seven points and three out of the five games had margins of 16 points or more. With many of the games now it is a matter of picking on form rather than class. Some of the teams who are in the bottom half of the table are only hitting their straps now like the Reds, Blues and Stormers, while other teams higher up the table like the Force, Brumbies, Crusaders and Chiefs have got the speed wobbles.

Our correspondent in the Southern Hemisphere, Scott Donaldson regularly uses his blog to provide "footy tips" and here is what he is telling Rugby Union Fans this week: "How do you pick? Class or form? Some other poor teams like the Rebels and Lions are struggling, but luckily they play each other this round, so one of them will win."

He goes on to tell fans that "Super Rugby Round 18 is the first full round since the June Internationals, with five of them being the tough to pick derbies.

"Remember that these can be difficult to pick as the underdogs sometimes get a sniff of doing over their big brother.

"There are only two regular season rounds left, so make sure if you are in any fantasy rugby competition, that you favour players from teams who will be involved in the finals.

"There are some tough games to pick, with five local derbies causing potential banana skins for the better ranked teams.

"These games will split the tipsters fifty fifty and therefore it is imperative that you pick the winning team.

"It will be interesting to see how the South African teams bounce back after the June International tests given that all the other teams have played.

"It is hard to know if it is a good thing to have a break when the season is heating up? There will also be some injured players after the test matches with the likes of Stephen Moore and Conrad Smith likely to be on the sideline for some weeks."

Scott has also made the point to us this week that he sees various games emerging as real life trials for the international season.

There are some virtual All Blacks, Springboks and Wallabies trials in Super Rugby Round 17 with the Chiefs hosting the Hurricanes, while the the Crusaders host the hot to trot Blues in the New Zealand conference. There is only six points between the Crusaders and Highlanders compared with the Blues and Chiefs on 36 points.

The Australian conference has one epic derby match too with the Force hosting the resurgent Reds in a must win match for the Perth team.

There are two South African derbies with the resurgent Stormers hosting the Bulls in a match which probably won’t affect the Top Six placings, while the Cheetahs can ruin the chances of the Sharks when they host them. The Sharks are by far the best team in the South African conference, but their local rivals can put a dent in their chances of hosting the final.

The Lions host the Rebels in a match for the diehards only with both teams out of contention, while the high flying Waratahs host the Highlanders in a Sunday afternoon game which will be very high scoring.

It is interesting seeing how the Waratahs and Sharks are miles ahead of their conference rivals, while the New Zealand conference is far closer. This shows the amount of depth in New Zealand rugby.

We also talked with Scott about his blog and for further analysis including winning margin analysis and the upset radar subscribe to the Super Rugby Tips newsletters.

This is a virtual Quarter Final in some ways with the losing team probably knocked out of Super Rugby 2014. The Chiefs were narrowly beaten in Dunedin, while the Hurricanes beat the Crusaders. This could be the last game of the season for the Hurricanes if they lose, while the Chiefs will need to win both of their last two games to guarantee a spot in the finals.

The Chiefs will be hurting and now that they are outside the Top Six they will be desperate for a win against the Hurricanes and a win for the Chiefs would probably spell curtains for the Hurricanes who have the bye in Round 19.

There have been plenty of changes to both teams. Both midfields are new-look. Changes for the Chiefs include Tim Nanai-Williams gets a start again at centre, he is always one to watch. Tom Marshall moves to fullback for the Chiefs.

The Hurricanes will really miss their injured players with Victor Vito, Alapati Leiua and Dane Coles likely to be missed.

The Chiefs finished well against the Highlanders and will be looking to right the wrong against the injury ravaged Hurricanes who will miss their injured players.

For the Chiefs, Aaron Cruden is worth picking now that he is in good form. Liam Messam and Brodie Retallick are some good points producers, while Tim Nanai-Williams and Tom Marshall are exciting outside backs.

The Lions will be looking to finish strongly in Super Rugby 2014. They started the season strongly, but the wheels fell off the cart when they hit the road. They broke a massive seven game losing streak when they bet the Bulls in Super Rugby Round 16 and this win will give them the confidence to beat the Rebels.

Scott Higginbotham’s team will be looking to finish on a positive note, but they are on a three game losing streak and generally struggle away from home. They have been competitive this season, but have struggled to get off the bottom of the Australian conference.

Rebels (yet to be named) – Luke Jones, Scott Higginbotham and Jason Woodward.

This game is going to be another epic encounter. The Blues still have an outside chance at the finals and their recent form has been impressive. They have some great players like Keven Mealamu playing his 150th Super Rugby game, Ma’a Nonu, Jerome Kaino, Tony Woodcock and the returning Charles Piutau. Plus the exciting Ihaia West is running the cutter nicely, but can they show they are worthy finalists by beating the Crusaders in Christchurch?

The Crusaders were off their game last week and will need to play all of their available stars in this match to have a chance. This means Kieran Read and Daniel Carter will start, and they will have big Nemani Nadolo and Israel Dagg available.

This game is set to be a beauty. The Blues won their first away game of the season against the Force last week and so they are hard to write off, but given the quality of players returning to the Crusaders and the fact that they are playing at home, then they are the favourites.

The Crusaders have some really classy players with Sam Whitelock, Kieran Read, Dan Carter (second five eighth) and Nemani Nadolo likely to score points. Be careful though, because Carter and Read could be managed initially and may not play full games.

The Force are within touching distance of the Top Six, but like the Blues, Chiefs and Hurricanes, they must win this weekend. The trouble for the once highflying Force is that they have convincingly lost their last two games and will need to play out of their skin, to repel the resurgent Reds. This match is going to be another tight one, with Reds showing that there is life after Quade Cooper and Will Genia with two consecutive wins.

The wheels are starting to fall off the cart for the Force as their lack of depth is exposed.

The Stormers left their run a bit late in 2014. They have won their last three games, but won’t be featuring in the finals. The Bulls struggle on the road and lost to the Lions in their last game.

The Stormers have some experience in their team with Deon Fourie, Nizaam Carr and Jaco Taute, and have built up an impressive home record this season which will test the Bulls.

The Bulls have flourished with Victor Matfield masterminding a return to form of this young team in the second half of the season. Their team hasn’t been named, but will rely on Jacques-Louis Potgieter’s class.

It is going to be wet and heavy conditions so this will keep the scores close.

The Bulls (yet to be named) will rely on Jacques-Louis Potgieter, Victor Matfield and the bargain priced Jacques du Plessis, Jan Serfontein and Callie Visagie.

The Sharks are in a strong position following a dominant display this season and an ultimately successful tour to Australasia and they should be too strong for the Cheetahs on the road.

It will be interesting seeing how these teams go after the June Internationals, especially since the Sharks are the top South African team and are playing against the Cheetahs who are the bottom team overall.

First overall plays fourth overall when the Waratahs team hosts the Highlanders. Both these teams will appreciate the day time kick-off. Watch for plenty of tries and the Waratahs will be hard to stop with their firepower including Bernard Foley, Israel Folau, Wycliff Palu, Kurtley Beale, Alofa Alofa, Tatafu Polatu-Nau and Michael Hooper.

Both of these teams have named a settled team for this game.