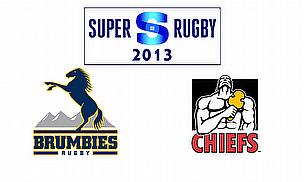 Brumbies take on the Chiefs in the 2013 Super Rugby final

The Super Rugby Final is here finally after nearly 125 games over about 25 weeks we are down to two teams with the Chiefs hosting the Brumbies.

If you picked either of these teams at the start of Super Rugby 2013 then well done!  The odds of these teams winning were $7 for the Chiefs and $12 for the Brumbies.

Interestingly these two teams haven't played against each other this season, which is in stark contrast to last week which was the sixth time that the Chiefs and Crusaders have met in the last two seasons.

The Chiefs and Brumbies have the best coaches in Super Rugby 2013 in my opinion in Dave Rennie with Wayne Smith and Jake White with Laurie Fisher.

It seems that coaching probably proved the difference in the semi finals last week which saw both teams beat more fancied teams.

The Chiefs and Brumbies in my opinion may not have the best players on paper, but they both come together well to form great teams.

The Brumbies haven't won in Hamilton since 2007 and will be travel weary following their victory in Pretoria over the Bulls last week.

I would be surprised if even the coaching ability of Jake White can get the Brumbies home given that they have already played two Super Rugby 2013 finals games and travelled from Australia to South Africa and now back to New Zealand via Australia.

Last season the Sharks tried to win a final in Hamilton against the Chiefs after playing in South Africa and were soundly beaten.

I think that unless complacency creeps into this Chiefs team then this should be a relatively easy win for the Chiefs.

The Chiefs have been named and are hoping Lelia Masaga passes a fitness test.

The key players for the Chiefs are Liam Messam and Aaron Cruden.

The Brumbies have got plenty of mileage out of their loose forwards with Ben Mowen and George Smith playing out of their skins.

Christian Lealifano and Stephen Moore will be crucial to Brumbies success while Tevita Kuridrani, Henry Speight and Jesse Mogg have been impressive out wide.

If you need to make plenty of ground on your competition in SuperBru and other tipping competitions then you have no choice but to go for the lower chance of a Brumbies win.

Who are you picking to win the Super Rugby Final 2013, Chiefs or Brumbies?