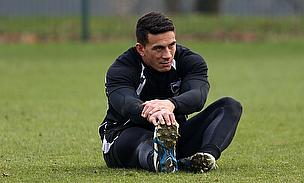 Was Sonny Bill Williams unfortunate to be penalised?
©Press Association

Pollard the star in round 4 Super Rugby XV
Super Rugby analysis - what does 34% mean to rugby fans?
Fantasy Rugby advice for Super Rugby fans
How to pick your Super 15 Rugby Dream Team?
Super 15 Fantasy Rugby Guide guide to Round 1

The season is underway, new players are settling in to the game plans. Rugby in the Southern Hemisphere is in full swing unlike English cricketers!

It had it all, upsets, refereeing decisions and some unpredictable margins for Super Rugby tipsters.

2) There were two upsets in Super Rugby Round 4 with the Highlanders and Lions winning away from home. Super Rugby is such a tough competition.

The Chiefs fell victim to some poor goal kicking, a bad yellow card decision and handling errors to somehow lose despite looking like winning after dominating possession and territory to the extent where they were also given two penalty tries. The Highlanders win was against the script, although it could be a tiring season with such one sided statistics.

The Blues have truly got the Blues after losing to the Lions who are widely considered to be the worst South African team. Admittedly the Blues returned from South Africa and would have been tired, but the Lions deserved their win and showed that no team can be taken lightly in this competition. It does beg the question of what Sir John Kirwan must do to lose his job?

3) The Lions win also leaves you wondering how much better the South African teams would do if they had to travel less? That has prompted the changes of Super Rugby soon to become Super 17 in 2016. The Lions will be on tour for the next three weeks and it is tough, so this victory was great for them and only their fourth in New Zealand.

4) While there were only two upsets in Super Rugby Round 4, the margins were difficult to pick. The Bulls, Stormers and Waratahs all won comfortably in the end with margins of 19,16 and 18 points, but given that these three games were predicted to be closer, most people probably didn't get any margin points for being within five points of this margin. So getting any margin point in Super Rugby Round 4 was a good effort.

5) What has happened to the home advantage? In Super Rugby 2014, 71 percent of games were won by the home team. In Super Rugby Round 4, only two from seven home  teams won, with the Brumbies and Stormers doing the job.

7) We have hassled the TMO decision making in recent weeks, but in the Highlanders vs Chiefs game there were some crucial decisions made by the onfield referee Nick Briant which Chiefs fans feel aggrieved about, which leave you wondering if the TMO shouldn't be able to have a word in the referee's ear and get them to change their decision.

The yellow card to Chiefs wing James Lowe for a slightly late tackle on Malakai Fekitoa need two replays to realise that a mistake had been made for people at home as Fekitoa was off balance and fell over, making it worse than it actually was.

There was also the match deciding penalty where some would consider SBW unlucky to concede a penalty for simply contesting the ball while on his feet. Of course, you are always tempting fate when going for a turnover in the dying moments of a match while in your own half, but it leaves you wondering if the TMO should be able to overturn decisions during a game if it is obvious that the referee made a mistake?

8) Super Rugby 2015 is still in the early stages, but it is interesting seeing the Stormers dominating the South African conference, while the Sharks are struggling.

Is there a similar case to be made for the Crusaders in 2015? Could it be that some teams with plenty of experienced players might be struggling fielding too many players who are slightly over the hill, or who may be saving themselves for a certain Rugby World Cup in 2015?

9) We must remember that we are not even a quarter of the way through Super Rugby 2015, but it looks like the Stormers, Hurricanes and Brumbies are the dark horses of each conference.

The Chiefs and Waratahs are also in contention, while the Crusaders and Sharks could be under pressure in 2015 to maintain their mantle as strong teams. I do love the fact that the Highlanders and Bulls are in contention despite being written off pre-season.

Teams like the Force, Rebels, Lions and Cheetahs are looking like they are a nuisance, but probably won't feature in the finals.

10) If you are playing SuperBru it can be frustrating that you get just as many points from being the closest tipster and picking the winning team to within five points of the margin, in two games as you get for picking five winners without any margin points!

What did you make of Super Rugby Round 4?