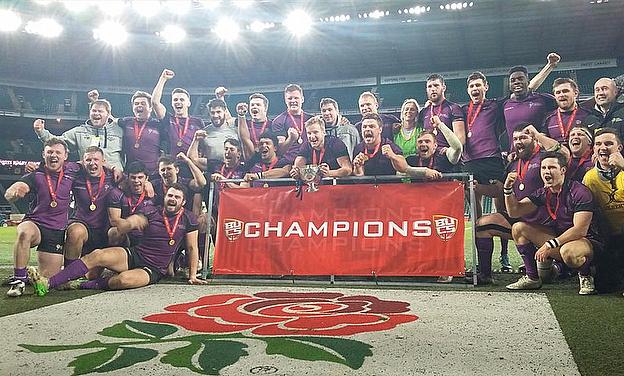 Leeds Beckett produced a sensational second half comeback to beat Loughborough 23-31 and secure the BUCS Championship Trophy at Twickenham.

The Yorkshire side scored an early try through Dan Grange, but it was Loughborough who controlled the first 40 minutes.

"It was always there for us, but we just didn’t believe in ourselves in the first half. I said before the game it was going to be exciting and it really was.

"We didn’t feel that Loughborough threw a lot to get that score at half-time and we kind of gifted them the score.

"The guys came out in the second half and showed what we can really do. We got a bit of field position and got the scores so I’m really chuffed for the guys.”

Man of the Match Alessandro Ricc

"The coach said at half-time we just need to play our patterns. They got such a big lead because of our mistakes.

"We needed to stick to our game plan and play territory rugby which we didn’t do. In the second half, we did play the territory, we got down there and we saw what we can do playing our patterns. It’s been hard work since July, but it’s now time to get our medals."

Beckett then mounted their comeback and cut the deficit to six points thanks to touchdowns from Alex Ricci and Josh Longston, before the Northern Premier Champions took the lead thanks to a penalty try.

Sam Brady then rounded off the game with the final try for Leeds Beckett to seal a league and cup double for them this season.

The match was slightly marred by the injury to Leeds’ Rory Mason, but he has recently tweeted to say he is recovering from concussion which is positive news.

Leeds Beckett came into this final knowing that their opponents Loughborough were the only side they had lost to this season.

Despite this, it was Leeds who started on the front foot as England Students Player of the Year Will Cargill went close with a 40m penalty, before Grange scored under the posts as Beckett dominated the early possession. Cargill’s conversion was well charged down by Loizias.

Leeds’ early joy was then subdued for the rest of the half as Loughborough started to go through the gears.

James, who was superb throughout these Championships for Loughborough, landed a penalty on 20 minutes before the men in white celebrated their first try of the night at the home of English rugby.

George Davies was replaced by Elrington and it took him just four minutes to make an impact on this final as he barged his way past two Leeds tackles to scramble the ball over the line. James added the conversion.

James then nudged over two more penalties to make it 16-5 to Loughborough and they then ended the half with their second try of the game.

Full-back Sam Pointon made a surging break from his own 22 and found Loizias midway inside Beckett’s half. He picked a superb line to collect Pointon’s pass and his pace saw him score behind the posts.

James added the extras once more and Loughborough’s name seemed almost certain to be on the Championship Trophy.

However, Beckett had other ideas and produced a remarkable second half display where they scored 26 unanswered points.

The second half began on a sour not as loose-head prop Mason was replaced due to a head injury, but his side were determined to turn this final around in their favour.

Man of the Match Alex Ricci got the ball rolling, as he collected a cross-field kick from Cargill to dive home in the corner after good attacking play by the Leeds back line. The TMO reviewed the decision, but it was given and Cargill’s conversion was good.

Leeds then made it 23-17 as from a rolling maul, Longston secured the score on 57 minutes and his side were now within a converted try of Loughborough with a quarter of the game remaining.

The Yorkshire side were relentless for the rest of the half and after repeat offences by Loughborough  in the scrum due to the fact they couldn’t cope with how dominant the Beckett pack were, the referee awarded a penalty try to Leeds. Cargill once again bisected the posts to give his side the 23-24 lead.

Cargill then narrowly missed a penalty to extend their advantage, but the win was secured as the forwards produced another excellent piece of work at the rolling maul, which allowed Brady to wrap up proceedings for Leeds and end their season as a double winning side.