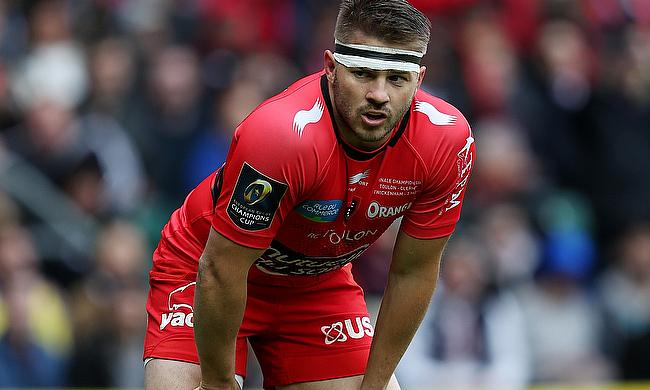 The former Wallaby crossed in the final play of the game to salvage a dramatic 15-11 win for the three-time Champions Cup winners, and in the process extended Toulon's 18-game unbeaten run at Stade Felix Mayol.

Guy Thompson looked to have given Wasps the victory that would have clinched a quarter-final spot with a try 10 minutes from time, but Jimmy Gopperth missed the conversion and Toulon mustered a decisive final attack as time ran out.

The result saw Toulon take top spot in Pool Five and they can win the group with a bonus-point win at Bath next weekend, when Wasps welcome Leinster at the Ricoh Arena.

Wasps stunned the holders with a remarkable 32-6 triumph in Coventry in November but were missing key forwards Joe Launchbury, James Haskell and Nathan Hughes through injury.

Toulon recalled Steffon Armitage after he sat out the scrappy win over Bath last week, and the English flanker immediately lit up this tie.

His barnstorming break through black and gold jerseys brought Stade Felix Mayol to life and only the combined efforts of Joe Simpson and Charles Piutau denied Bryan Habana an early score.

But Habana's interception of an errant Wasps pass sparked a counter-attack that ended with Quade Cooper scoring the game's first try on 13 minutes.

Ma'a Nonu released Josua Tuisova, who then handed the scoring pass inside to Cooper. Scrum-half Eric Escande's conversion, however, was wide.

Elliot Daly fared little better in response with a long-range penalty that drifted wide of the mark.

Wasps were then reduced to 14 men when George Smith was shown a yellow card by World Cup final referee Nigel Owens for a late tackle on Habana, and Escande kicked Toulon to an 8-0 lead.

Wasps managed to claim back three points through Gopperth before half-time although the start of the second forty saw a number of fluffed attempts at goal.

The barren kicking spell came to an end on 63 minutes when Gopperth finally converted a second penalty to cut Toulon's lead to two points.

But a shock looked on the cards when Daly used his pace to beat the cover defence and Thompson barged his way over for Wasps' only try on 70 minutes.

Gopperth pushed his conversion wide and Wasps' lead was 11-8.

They looked set to hold on amid more stubborn defending that appeared to frustrate Toulon.

But the holders showed their class late on as Mitchell raced onto Nonu's pass to score the match-winner in the first minute of added-on time.